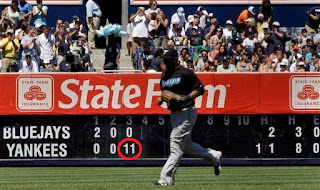 If the bottom of the 3rd inning in Saturday's matinee against the Yankees doesn't represent the low point of the season to date, then I don't know what does. 11 runs? 11 goddamned runs?

Truth be told, I just finished deleting 30 minutes worth of blogging, as it consisted wholly of whining about the lineup card filled out by Cito (Nick Green leading off at DH, John McDonald in left....but I digress) and the embarrassing display of baseball in the aforementioned inning. I was all set to hit "post" in a blind rage, feeling smug and satisfied, when a few things occurred to me:

It's just one game. 3-2 or 11-2, the Blue Jays losing to the Yankees - both teams as currently constructed - shouldn't come as a surprise or major disappointment. One team is built to win now (and every year, one could argue), the other is building to win in the future. The near future. Hopefully.

And you know, about that lineup....which I still maintain was horseshit, and continues a running beef I have with Cito and his "giveaway game" lineups....the major-league roster, right now, does not have a lot of horses. Plain and simple. And I understand that. It's about building toward the future. It's about developing the talent in the minor leagues. But with the second half approaching, I'm left to wonder: how much more developing do some of these players in AAA have left to do? How much added benefit can be derived from 80 more games in the PCL?

Will JP Arencibia improve on his near 1.0 OPS? Is Brett Wallace's defense and learning the position really what's keeping him down (apart from the current "sore wrist", but you know what I'm sayin')? Is there really anything to be gained by letting these players dominate a league in which they have little more to prove (Arencibia moreso than Wallace)? If 2011 is to be the start of The Contending Years, wouldn't a few months of big league training this season serve the players - and the organization - well?

Time will tell. As the trade deadline draws nearer, hopefully sooner than later.

The future of Marcum
I haven't completely exhaled upon hearing word of Shaun Marcum's trip to the DL with "elbow inflammation", but the MRI revealing no new damage certainly helps. Still, clear MRI or not, you'll forgive me for feeling a little nauseous at the thought.

Equally disconcerting is the fact that sore elbow or not, Marcum's name still figures prominently in trade talk. Truthfully, I'm conflicted. I have a soft spot for Marcum. He may not be the "ace", but he certainly does appear to be the "glue" of the starting 5. He's self-effacing (re: "I don't throw a "heater"....it's a "warmer" "), fun to watch, and popular with his teammates.

On the other hand....if the Jays do have a surplus, it's in starting pitching. Marcum likely has the most value of the pitchers potentially dangled (Romero will not be one of them), and is likely the guy seen by contenders as the most ready to help chase a pennant. However.....I don't believe Anthopoulos would deal one of his coveted young arms for anything less than a spectacular return, and this trip to the DL will certainly not help in that regard.

My prediction: Marcum will be a Blue Jay come August 1st. And he will continue to fucking nail it.
Posted by The Ack at 12:18 AM

Email ThisBlogThis!Share to TwitterShare to FacebookShare to Pinterest
Labels: shittacular bed shitting, shitty this and shitty that

I'm going to continue to blindly follow AA until his actions warrant otherwise. There must be method to this madness. Patience young apprentice...

Why is it that Rogers has time to show God Bless America, but not the Jose Molina pop out in the 4th inning?

I know it's July 4th weekend, and they are in NYC, but this has been one infuriating weekend of baseball. I need to be more zen and long-term, The Ack.