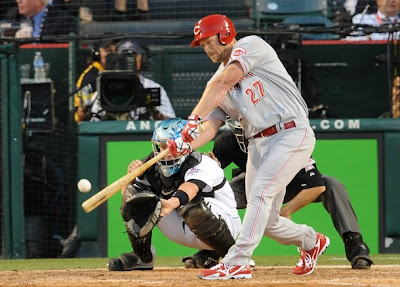 First off, let me thank all of you who showed up, huddled around your respective personal computing terminals and liveblogged it up with us throughout the entire four and a half hours of last night's advertising and Fox-swooshing extravaganza, with a little baseball thrown in for good measure. (Meanwhile, Yankee and Red Sox fans are saying: "Four and a half hours? That was a quick one last night!")

Anyways, you're all troopers, and it's fun to hang online with witty and wise baseball fans. We'll do it again soon, and the kegger will be at Archi's.

As for the whole spectacle, which we vigorously defended last week, let us say this: We were kinda wrong. But with an explanation. And here it is.

We have a theory that the 12-month annual cycle for everything is just long enough to allow us as humans to forget about the details, thus keeping our anxieties in check and allowing us to live somewhat happy, temporarily oblivious lives. Looking back, we clearly remember highlights (good or bad), but each year, we have those "oooohhh yeeeaah" moments as things come into sharper focus. Sometimes the realization brings excitement and sometimes, it brings dread. But the year is long enough that we don't recall those feelings or sensations until they are right in front of us.

Oh yeah: That's what winter smells like, and that what it feels like to hear your boots crunching over the snow, and that's what a cold wind feels like in your face.

Oh yeah: That's what this bar looks like when it is overrun by 19 year-olds in during Frosh Week, and that's what their piercing shrieks sound like.

Oh yeah: This is how it feels when I'm halfway through my tax return, and it's not clear if I owe or am owed.

Oh yeah: This is why the All Star Game kinda sucks.

Now, don't get us wrong: We still love the nine innings of baseball that gets played (though we wish that it were managed better and with smaller rosters), and there are elements of the pageantry that we still think are awesome.

But last night, as we watched Joe Buck skip through the lineups as quickly as possible so that Fox could get to an endless taped piece in which celebrities told us how nice and good it is to do things that are nice and good, and as we watched some chick from the drama geek show that we don't watch sing motherfucking "Hero" (because a hero lies in YOU, don'tchaknow), we had that feeling.

Oh yeah: This is why people hate the All-Star Game.

And to be fair to Keith Law, who we pilloried last week for his lack of devotion to the game, sitting in the crowd from the game last night would have been a miserable experience, wrapped around a pretty decent exhibition of baseball. The KLaw quite rightly noted last night that he won the evening by spending it at a ball park as we were spending it, slaving over two screens and looking for meaning amongst the noise.

Mad love for the GBOAT
Speaking of things that had faded from memory: We forgot just how much we loved Scott Rolen over the past year. But seeing him last night reminded us of why Rolen is and will always be the Greatest Blue Jay of All Time.

We live in an era of vigorous fist pumps over squibby singles, pose downs over striking out the pitcher for the first batter of an inning, and hour-long specials devoted to how awesomely important a particular athlete is and how impactful his decisions shall be. Rolen, though, seems not to exist in that era. He is an expert craftsman who does his job without lavish exaggeration.

Pick a hot shot out of the dirt at the hot corner and throw a laser across the diamond for an out? Ain't no thing. Jus' business.

Crank a ball back up the middle off the next great young Yankee? All in a day's work.

Go first to third on a soft single, and redefine the entire flow of the key inning in the game? That's just what he do.

Maybe he's taciturn in the clubhouse, and maybe he wasn't a media darling, and maybe he's not one of those athletes who works hard to build his brand and sell himself in all sorts of ways to sell more sport requenching product or whatever the fuck. But Scott Rolen, in the game of baseball, is a man amongst boys.

You know that Old Spice Manly Man whose ads were on dozens of times last night? He goes to bed every night, wishing he was half the man that Scott Rolen is.
Posted by Tao of Stieb at 10:41 AM

Email ThisBlogThis!Share to TwitterShare to FacebookShare to Pinterest
Labels: All Star Game, Scott Rolen is the Greatest Blue Jay of All Time

You forgot all the mentions of Justin Bobby and what a terrible person I am.

I love liveblogs and Scott Rolen. And the All-Star Game, mostly.

Loved Rolen's contributions to the game last night, even if I paid so little attention to the rosters that I didn't know he was on the team until he hit that single.

Good for him, I always liked Rolen and will continue to wish him the best.

As for the All-Star game as a whole? I'm old and have a day job, I went to bed before it ended.

I don't understand why they can't start all that pre-game noise an hour earlier so that they don't have to start a 9-inning baseball game at 9 PM, but I guess the folks at Fox have their reasons.

That said, I could have easily just tuned in at 9 and skipped all that junk, so... meh. The game was a lot more frustrating to watch than it should have been because of the boneheaded managing more than anything else.

I watched bits and pieces of the all-star game and can't say that I was terribly excited. I mean, it was nice to see a pitchers duel out there, but my heart just wasn't in it.

In other news:
We will miss you Tiny Tim!

Other then the rather sadening incusion of Collins in the deal, I am pretty happy with the move. Good job AA.

Yes, other than my personal sadness at Collins being included in the deal, it kinda looks like AA got a great deal. Selling high on Gonzalez and buying low on Escobar -- I'm surprised Atlanta made the deal, really.

Scott Rolen is evidence that you can be a surly bastard if you got skills to pay the bills. That counts for everything.

It was the 83 game that hooked me for life...Dave Stieb starting...Fred Lynn grand slam. Them's were good and simpler times