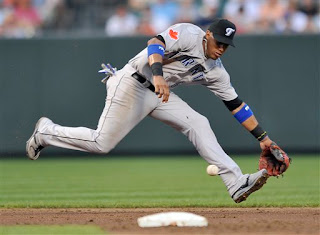 The trade is a few days old now and beaten to a bloody pulp by the blogosphere....but dammit - I want a turn! So here it is....

The deal is a win for the Blue Jays. Not because Yunel Escobar appears to be flashy as fuck fielding the ball at short. Not because, discounting this season, he was viewed as an elite bat at the position. Not because he gets on base and not because he flashes power. And the trade is definitely not a win because Alex Anthopoulos has rid the team of any shortcomings in the "old" shortstop's game.

It's a win for the organization because the logic behind the deal trumps the end result - good, bad, or otherwise - and Anthopoulos continues to prove he's unafraid of taking on the risks necessary to execute his plan. Er, I mean, The Plan.

(...and yes, I'm cringing at opening the door to references to the "5-year plan" oft-attributed (but never actually proven) to JP Ricciardi. So just don't, OK?)

Anthopoulos has always - from day 1 on the job - maintained he was much more interested in targeting elite talent over quantity of talent. Those players come with a degree of built-in risk, but it's the only way for the Jays to compete with the wallets of the Yankees and the Red Sox. Flipping a stopgap shortstop solution, no matter how well he's performed, for a cost-controlled player at the same position with a potential to be great is a risk you have to take.

I was one of those guys openly questioning the wisdom behind signing Alex Gonzalez in the preseason. I found it fairly unlikely he'd accumulate any sort of trade value and didn't see the upside contribution over the team's current version of Alex Gonzalez (John McDonald). Yeah, I was wrong there. Shocker! Raise your hand if, on April 1, you thought the Jays might parlay Gonzalez and 2 non-elite (more later) prospects for a potential all-star calibre shortstop. Now put your hand down, you god-damned liar.

Here's what the Jays really gave up:

* A veteran shortstop playing to the absolute peak of his abilities, who very likely was in his final year with the team, and if not, almost certainly in his final productive year with the team. No offense to Gonzalez, who was a total pro and exceeded any and all expectations, but if you think he's capable of carrying this performance through 2011.....well, I don't know what to tell ya'. Other than to say "he isn't". (But I've been wrong before. Have I mentioned that?)

* A scrappy, gritty, speedy little Reed Johnson of the infield, who might have a decent career as a major league utility player.

All of the above are worthy assets. But all of the above would fall under the label of quantity. Quantity can be accumulated. Quality is more difficult to come by. And if Gonzalez maintains his pace and leads the Braves to the playoffs - a hearty pat on the back to him, because that just was not going to happen with the Jays. If Collins exceeds expectations and thrives in the late innings, and Pastornicky develops into an everyday sparkplug of a player? The cost of doing business.

Now let's say you're the same Cuban shortstop who sees another Cuban shortstop ahead of you on that depth chart, out to prove he is indeed the elite major league player he was on the verge of becoming. Under which scenario do you think a player would push to get the most out of his talents?

Smart guy, that Anthopoulos.
Posted by The Ack at 1:43 AM

Email ThisBlogThis!Share to TwitterShare to FacebookShare to Pinterest
Labels: The Plan, Yunel Escobar

Fucking brilliant.
All of it.

Nails, Ack. Quality over quantity, any day of the week.

I believe in the Anthopoulos doctrine.

I think that is underestimated is the nails contract GM AA signed A-Gon to. If he didn't have that second year cheap extension, Atlanta wouldn't have done the deal.

Goos assessment. Something tells me that if Keith Law is right about Escobar (body getting thicker), Hech will still be the shortstop of the future (~2012) and Escobar might have the tools to be a good fielding shortstop, with a decent bat for the position.

Am I the only one, who when first heard about the trade thought there was no way?

I'm still flabbergasted, it would be like trading Adam Lind for Jonny Damon..

At this point I am mystified as to why anyone would question anything AA does. He's human and will make mistakes, but so far he's proven that they are going to be much fewer in number than his good/great moves.

The funny thing with a plan or The Plan-it's easy to have one, but for most of us it seems to be another thing following one. AA continues to impress. As did Escobar last night...

I didn't include a lot of stuff in this post that I originally intended, because it would have come across as just re-hashing the same old....but I feel like there's a tonne of revisionist history going on with parts of this deal.

Also, I'll say it again - fuck the Atlanta (& some national) media for the way they rode this kid out of town. Toronto did the same to Rios, but at least they had a "Who gives a fuck?" youtube video to hang their hats on. And a huge contract to boot.

Here's how I rate the trade:

If you had have told me at the beginning of the year that the Jays could trade Alex Gonzalez for Yunel Escobar, I'd call you a liar and ask you to leave my house.

I love the pattern of trades AA has made so far: he bought low on Morrow and Escobar, and while it's still too early to judge whether the trades have panned out, I think we can easily say that they improve the team in the long term no matter what.

Now I wonder who AA's going to get for the rest of the guys on the block like Downs, Gregg, Overbay etc.

I wonder how Hechevarria and his agent feel about this acquisition after turning down the Yankees because of Jeter's presence. Aside from the money I'm sure the two year window on Gonzalez was used as a major selling point by AA. Not that it matters now, haha.

Even though the regular author on this site has become as insufferable as that clown from Chicago, this Ack fellow raises many fine points.

When I personally arranged a face-to-face meeting in October with John Malone, with hopes of swindling him into trading Escobar in exchange for Jason Frasor and Lyle Overbay, he reacted quite hysterically, calling me a dirty scoundrel and a snake. He ensured me that, if I wanted to aquire the Braves' 2009 MVP short-stop, it would cost me Travis Snider and Ricky Romero.

Naturally, I laughed in his face, and departed following a brilliant crème brûlée and a glass of Jenssen Arcana. As my driver pulled out of the parking lot of
Quinones at Bacchanalia, my eyes met John's as he walked to his car. I pointed to my Piaget, and yelled out the window, "your window is rapidly closing, old friend!", hoping that in time he may reconsider moving Escobar and propose a counter to my ridiculous offer.

And what do you know? After I had moved on from my dreams of acquiring Yunel for a song and a dance, I convinced Alex Gonzalez, (whom I had personally scouted and predicted massive power production from), to sign for pennies on the dollar, with a "generous" club option for 2011.

The rest is, as they say, history. My impertinent, libidinous business strategies continue to pay dividends, and provide you, my loyal fans, hope for the future, leaving you excitedly anticipating my next ingenious operation.

I promised glory for my team, and my fans, and my word is as good as gold. Trust me.

HTV is a genius.

If only a could but touch the hem of Handsome Tony's garment.

I would like to exchange links with your site taoofstieb.blogspot.com
Is this possible?