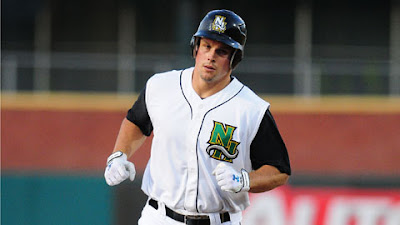 It occurs to us that it can't be a barrel of laughs right now for Travis Snider, as he follows along the slooooooooooow rehab process to get back to the Jays. At this point, he's strapped on his gear to play 19 minor league games through this get-well assignment, while only getting 33 big league games before the wrist injury.

We don't want to assume that Travis is playing angry now, because we know that the rosy-cheeked phenom has had to work on controlling the inner rage in the past. But in the last three games, Snider has knocked the snot out of the ball as if it had an impression of The Manager's mug on it. Three homers and 11 RBI later, maybe Sniderman is trying to send a message that he's no longer enjoying his return to Manchester.

And really, can you blame him? We're not pissing on Manchester or New Hampshire, because we're sure that it's totally peachy there. But after breezing through Double-A when he was barely through his teens, and making it all the way to the bigs by 20, it's gotta suck to get optioned back there to put in time while the team calls up Mike McCoy's limp noodle of a bat to fill in here or there.

We're sure the Fisher Cats fans are happy to see the returning hero, but if we were Snider, we'd feel like smashing something every day that we were stuck back there.

Friday Rock Out - Angry Young Man Edition
If we were an angry young man (as opposed to a grumpy old dude), we'd probably listen to something like The Offspring's "All I Want" and glare at everyone all day. Try it for yourself!

Have a great weekend. The Ack is away on assignment, and if Mrs. Tao will get off our ass for five minutes this weekend, we'll do an extra special weekend edition for you.

This whole Snider episode has struck me as bizarre from the start. Somehow something that was supposed to be a game or two turned into 1/4 of the season. Time to say adios (this time permanently) to E5.

Years ago, I was an angry young man/I'd pretend I was a billboard/standing tall by the side of the road/I fell in love with the beautiful highway

I'd like to see snider back, but hopefully this is the confidence boost that really helps him finally break into the majors with authority.
In a nothing year, having snider rehab extra long is only taking a toll on dedicated Blue Jays fans who'd rather see him hit ninth, than Edwin.
If the jays are able to move a Bautista, E5, Buck, or Overbay, or better yet, a combination of at least two of them, it could result in two players who look bored in the minors being called up/recalled; Brett Wallace and Snider, not to mention another certain catcher name Aaron Cibia, who is doing ok....i guess? HA!
I for one am looking forward to the production that comes from the 7,8,9 hitters in september, while we all wave Clarence off into the sunset on his farewell trot.

This might sound like a stupid question, but why did Snider rehab in Double A and not spend any time in Vegas? Would it make more sense to have him try to hit off a higher level of pitching in AAA, or get his confidence up by mashing pitchers in AA?

Considering the insane hitter-friendly confines of the PCL in general and of Las Vegas specifically, it seems pretty likely he'd put up some confidence-building numbers there too. His OPS playing for the 51's is 1.094.

So yeah, it's a head-scratcher for sure.

The difference in pitching, especially in the PCL, isn't that much between AA and AAA. Consider Kyle Drabek.

I believe the rationale was that AAA pitchers are 'craftier', and they just wanted Snider to go the farm and rake fastballs while he rehabbed.

so here's my thought. buck has worked out well, and with d'arnaud probably three years away, why don't we sign buck for 3 years, and flip arencibia for something. kc for alex gordon?