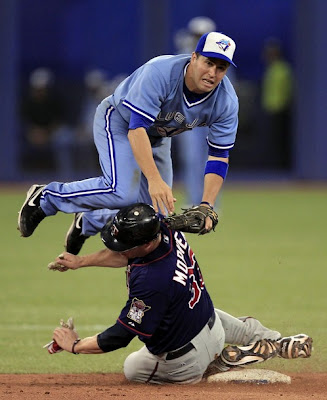 When the Jays recently acquired Yunel Escobar, some of the sniping sports media tourists made snide remarks about the revolving door of shortstops that the team has used over the years. To which we thought: What about John McDonald?

(We doubt it really matters if the Jays have had too many different bodies at that position anyhow, but this seems to be an ongoing gripe. People gotta bitch about something, we suppose.)

It hardly seems like he's been with the team this long, but John McDonald first stepped onto the field wearing the Black and Silver of the Blue Jays way back on April 5th, 2005. (A game in which he went 3-for-4 with a double and an RBI, no less.) McDonald's teammates that day included Frank Menechino, Shea Hillenbrand, Eric Hinske and Gustavo Chacin, while Miguel Batista came in to get the save. And the starting third baseman for the Tampa Bay Devil Rays on that day?Alex Gonzalez, the pretty version who patrolled shortstop for the Jays for the better part of seven years. (And the last regular everyday longterm shortstop, for those of you who bemoan the turnover at that position.)

None of this is to say that Johnny Mac has been a key cog in the Jays' roster over the past six seasons. As much as we all love him for his unparalleled excellence with the glove, he's seemingly served as an auxiliary bench coach, mascot or designated pinch runner for the bulk of his time here. And yet, his ability to stick and make himself a better hitter (no, really, he has!) and a useful bench player has led to McDonald actually beginning to take his place in Blue Jays history amongst their all-time leaders in several categories.

McDonald's stick-to-it-iveness has also resulted in his managing to amass 22 stolen bases over the years, leaving him in a tie for 36th on the all time Jays stolen base list, alongside Aaron Hill, Rickey Henderson and Ernie Whitt. (Think about that foursome one more time: Johnny Mac, Hill, Rickey and Ernie. Tearin' up the bases in their own ways.)

Not surprisingly, McDonald ranks sixth all-time amongst Blue Jays in sacrifices with 31, just three behind Tony Fernandez and seven behind Lloyd Moseby. (Alfredo Griffin's 74 sacrifices seem like an unattainable summit, given the changes in the game.)

And while he has made the 897 outs as a Blue Jay (47th all-time, tied with Cliff Johnson), he's also pulled ahead of Nelson Liriano to claim 49th on the all-time singles list with 193.

We don't run through this list of achievements to mock. There's a certain degree of respect that you have to give to a guy who sticks around long enough to get his name on those lists. We're not sure how long Yunel's sore hand is going to keep him out of the lineup, and we're certainly hoping he's back soon. But if Johnny Mac is going to get playing time, we're hoping to see him pile up some numbers so that we'll continue to see him amongst the long list of all-time leaders for years to come.
Posted by Tao of Stieb at 8:56 AM

I will fight any of you that have anything bad to say about this man.

Dude also finished his college degree like, the other day. He's been taking distance studies for a while now to get it done. There aren't a whole lot of ball players who would be into that kind of thing, but that's pretty cool.

I am only a couple sentences into your post, but has Jeff Blair become a sport media tourist in your book now?

Great read. Brought a smile to my face.

A lot has been made of the Jays' carousel of shitty SS over the last decade, and 2 decades if you count pretty boy Alex Gonzalez. But seriously, how many teams haven't had mostly shitty SS over that span also? Other than A-Rod, who was the last Mariner SS that mattered? I can't even remember a good Royals or Astros SS (Dickie Thon?!). Before Furcal, the Dodgers had the likes of Izturis, Cora, and Offerman. I'm sure there are more examples. It's the hardest position to fill with a good hitter so it's understandable. Plus, that stupid JP guy didn't draft Tulo and Hill didn't stick at SS, or else no one would be talking about this.

One fond memory I have of Alex "McDreamy" Gonzalez' time with the Jays: that was the last time my wife would willingly watch televised baseball with me.

A Batista save? Ugh.

Do your worst, Sarah.

I wanted to take a closer look at the Toronto sports scene as a whole and attempt to determine which Toronto team is the likeliest or is best positioned to win a championship.

Do you guys think the Jays are the closest??

I am shocked that the first Alex Gonzalez had five full and one 3/4 season with the Jays. Those Gord Ash teams put me off the Jays for a few seasons until he got fired.

Love Johnny Mac's attitude, his versatility, his uncomplaining acceptance of his role.

Not such a big fan of his D, though. Outside of his stellar 2007, it's not much different than the alternatives (Scutaro, Gonzalez, Escobar).

Great fucking post; who'd have thought Mac would have accomplished so much? While he's not a Major League hitter, you have to give it up to a guy who has forged an MLB career, and made the lists you mentioned, while being unable to do half of what it takes to be a Major League Baseball player. Props to Johnny Mac.

Anybody else wants a FREE MC DONALD'S GIFTCARD?