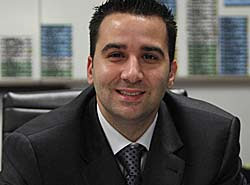 Late to the party as always, but I'd be remiss if I didn't chime in with my own meaningless bullshit concerning the Jays' latest move as the trade deadline approaches. A move I still can't quite pin down in my mind, but more on that later......

But no, this post isn't even about the merits of Gose vs Wallace. It's about Anthopoulos. And I think it's safe to say this:

And don't take this the wrong way - we're all friends here, yes? - but he especially doesn't give a shit about what you think about the players involved in his deal (even if he's far too polite - how Canadian! - to actually say so).

And right or wrong - no matter how you feel about this trade - there's merit to that. Anthopoulos has placed his flag in the ground and tied his fortunes to the opinions within the massive scouting staff he's assembled. Not to public opinion. Not to twitter feeds. Not to mainstream analysts. To his scouts, and to his own eyes.

Anthopoulos (& his staff) had it bad for Anthony Gose. He is the guy they wanted. So he's the guy they got (writing skills!). And that's the way it should be, shouldn't it? The GM of the team - the man probably most responsible for the club's success or failure - should do things his way with the players he wants.

How I feel is irrelevant. I might feel, for example, that dealing away the player long led to believe was the 2011 everyday first baseman sets the club back. Anthopoulos obviously feels differently. Why? Could be that there's another trade for a 1B in the works. Could be that he sees the club stronger with Adam Lind playing everyday in the field. Or it could very well be that given half a season to evaluate Brett Wallace on a daily basis....he realized there wasn't as much there as he previously thought.

Or it could just be that his scout-crush for Anthony Gose was so massive that parting with Wallace was just a painful measure of doing business. Time will tell if it was the right call, but like I'm fond of saying around these parts (apparently)....process over outcome rules the day.

Quickly - Trade Deadline
* If Jon Heyman turns out to be correct (he won't), then process over outcome can kindly fuck off. Light-hitting middle infield non-prospect in exchange for MLB's current home run & beard leader? No.

* A day after blogger The Southpaw and I eerily simultaneously tweet about the possibility of Yonder Alonso becoming the new Brett Wallace.....Jeff Blair chimes in with word the Reds want "in" on Scott Downs. Cue Twilight Zone music....

* How come there is absolutely no buzz surrounding John Buck? If Jose Bautista is "sell high" Exhibit 1A, Buck has to be 1B, no?

* Similarly, no buzz around any of the Jays young starters? Seems like more of an offseason move, I suppose.

Could they have gotten Gose without trading Wallace?

Did AA have to use a household minor league name to get Gose. Theres a lot of prospects out there to mix + match.

Now I see Snider playing and/or learning 1st base in 2011 rather then lumbering into the outfield walls.

actually, having looked up Alonso - while he'd still be a nice "get" he's not ready yet.

My longing eye has drifted off to the one, the only, KILA!!!!


Easier target (AA can pick Moore's pocket with a broken hand) and ready to go two years ago.

Brett Wallace is a worst first baseman than Lind. He would have weakened the team and his power isn't as great as he's been promoted. AA will have to be given time to prove that Gose is that good because nobody else sees it.

Bautista in no way blocks Snider. If anything right now Lewis is blocking Snider, and that's not really a problem. Bautista can play right and Snider left and that is without being able to slot Bautista into 3rd or 1st if necessary.

I would like to exchange links with your site taoofstieb.blogspot.com
Is this possible?