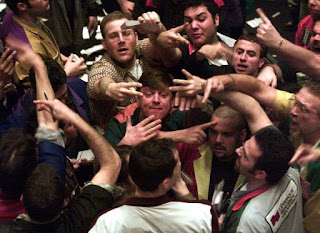 As trading season approaches and the winds of change blow through MLB (Cliff Lee, speaking for whichever team you were pitching for and whomever just acquired your rights....we hardly knew ya), the conversations surrounding a rebuilding team now firmly entrenched in non-contending mode are sure to center around one common theme.
Sell anyone and anything not seen as part of The Plan TM in 2011 and beyond.
Seems simple enough. For a confessed surfer of prospect porn and minor league boxscores, it seems equally obvious that yours truly would fall right in line with such. After all, for every marketable piece the Jays might offer, an intriguing prospect awaits his chance down on the glittery farmlands of Vegas. Consider:
John Buck: JP Arencibia (.364/.639/1.003, 23 HR, 60 RBI)
Jose Bautista: Brad Emaus (.412/.478/.890 in 72 games split between AA/AAA)
Lyle Overbay: Brett Wallace (.364/.498/.862, 14 HR, 44 RBI)
Alex Gonzalez: Adeiny Hechavarria (er....let's just say minor league stats unavailable. OK? We good with that?)
Compelling arguments, all (most). I've even wondered openly in this space as to the need to carry the sellable vets for the duration of the season. But upon reflection - as always - it's not that simple.
Imagine this team, this weird, bizarro 2010 Toronto Blue Jays team, without the offensive output of All-Stars Buck and Bautista. Yes, that felt as strange to type as it is to read. Now imagine watching the club try to find it's way through 70-odd post All-Star break games where the only sure offensive force is Vernon Wells (again with the bizarro).
It might be exciting. But it might also be painful. The only sure thing about rookies is there are no sure things. To throw 3 or 4 kids straight into the fire of major league competition stripped of veteran roster presence would be a disservice to their development and a potential disaster in the standings. A trade or two with an acceptable return would be tremendous and welcomed; a wholesale roster turnover is another thing altogether.
I'm all for change with this club. I've embraced it wholly and thoroughly and am genuinely excited about the future under the guidance and vision of Alex Anthopoulos. Things are different now, man. Slot-busting draft bonuses (Dickie Thon Jr.!), snagging front-line international prospects (Adonis!), and a thorough re-stocking of the minor league system. It was the only way to go, and it's the way the Jays have gone & are going. If the path taken by this Jays front office team has taught me anything, it's that patience is required....and hopefully rewarded.
So, yeah....Playoffs! Just maybe not this season.
....but can we start maybe talking about a Kyle Drabek appearance?
How do you follow up a no-hitter? By tossing 6 shutout innings in your next start, of course. Apologies for forgetting the source - I read way, way too much Blue Jays related info on the internets - but I browsed upon a thought that the Jays should consider a 6-man rotation in the season's final months as a means of limiting innings on all those impressionable young arms.
Until given evidence that it's a total shitbag of an idea, consider me down. And who better to take that 6th rotation spot than our guy Drabek? Curiously, I'm opposed to a Vegas promotion, because I don't see how inevitably getting shelled in the hitter's paradise known as the PCL (see prospect stats above) would benefit his development. I say when he gets the call, make it directly from New Hampshire.
How does a late August/early September cup of coffee sound?
Posted by The Ack at 2:16 AM

A banana boat full of rookies cannot be any more painful than watching a team of "vets" meekly offering no resistance to the Pawtucket Red Sox who sodomized them thoroughly last night. This is starting to get stupid with the Red Sox. At what level of poor play and injury does Boston have to be at before Toronto is competitive with them?

Of those players, the one that is the most worth trading is Buck followed by Overbay. Gonzalez's defense at shortstop and Bautista's defensive versatility make them the ones most worth keeping.

At catcher, Arrencibia is not knocking on the door so much and banging and screaming. Add to that the fact that Jeroloman belongs in AAA at worst and the fact that D'Arnaud looks ready for AA and it's pretty clear that it's time to create some openings. Buck will never look better than he does now so sell, sell, sell.

Overbay is a pretty valuable part of the infield defense but since there's zero chance he's coming back, the Jays might as well start the audition for 2011. Wallace is the ideal fit, Lind is the fall-back.

Unless they net a new SS prospect in one of the trades,the Jays have no one that's remotely close to taking over for Gonzalez. Even in a best case scenario, Hechavarria, Pierre, Pastornicky, Jackson and Thon are miles away. There's McCoy but only Wilner seems to take him seriously as a candidate to start.

Third is complicated. Bautista is a better defensive RF than 3B but he's at least serviceable at his weaker position and servicealbe might be as good as it gets for the Jays in 2011. Encarnacion is barely worth mentionning at this point. Emaus intrigues me a lot as a potential leadoff hitter but from what I hear he has really struggled with the transition to 3B. Even if Emaus or a prospect netted in a trade established themselves at the hot corner, Bautista would still be valuable. You certainly lose nothing by moving him to his better defensive position. Well I guess you lose Fred Lewis but I doubt FLewis is part of The Plan TM. In fact, you could probably add him to the list of position players who are trade candidates.

You just have to see what the market is for the players. It's only worth it if you can get something worthwhile coming back.

May I just ask why everyone always says that Fred Lewis isn't part of the plan? After watching him play this season I am thinking he should be added to the plan.

To throw 3 or 4 kids straight into the fire of major league competition stripped of veteran roster presence would be a disservice to their development and a potential disaster in the standings.

Is there any proof that having some veterans on a team helps younger players develop? I feel like the Rays just started performing without any vets, and the Red Sox have done well with guys like Pedroia and Youkilis developing without much veteran leadership on offense outside of Lowell and Ortiz. (Unless you count JD Drew and Manny Ramirez as leaders.) Nick Markakis in Baltimore has also developed despite nobody being there.

I get the feeling that if a player is going to develop, it'll happen, as long as he gets consistent playing time. I think the worst thing the Jays could do is to bring any of those guys up without them having a clear opportunity for playing time.

There's no room for Fred Lewis in the future. Snider has a corner OF spot locked up and Wells will have to be moved to the other corner OF spot at some point. Lewis is a great fit right now because he fills two needs, a leadoff hitter and a corner OF but he's not exceptional in either of those roles. His OBP is good by Blue Jays standards but still below what you'd typically want from a leadoff hitter and his defense is poor even for a LF. There's no way Lewis could make the transition to CF so you'd have to forget about him long term even if he did get on base more. He's not Mr. Right, he's just Mr. Right Now.

Hech also started a triple play the other day apparently, which is, if nothing else, kinda cool.

I'm of the sentiment that since the Jays acquired Fred Lewis for cash, if they can now flip him for ANYTHING slightly better to a team willing to see if what he showed here can continue, and dare I say, blossom, then they have to pull the trigger. Its true that if not next year then by 2012 fan favourite Vernon Wells will have to be moved to the corner that its determined Snider isn't suited for, which i suppose will all come down to whether he can pick his spots hitting the cutoff man, or throwing six feet wide of home.

Sell everyone. Buck, Overbay, Gonzo, Lewis, Bautista. All in that order, unless someone gets googly eyed over JoBau's HR's and figures he'll help them win a WS, then ship him for the best deal possible. Even if by some fluke of the imagination he turns out to be a power/walk threat for the rest of his career, we'll have other options.