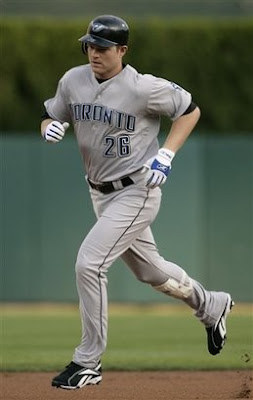 Two wins in a row! All is well! Go ahead and shovel your antidepressants back into their industrial-sized tub!

Even with last night's 6-4 win over the Tigers, the Jays remain eight games back of the Red Sox for the Wild Card, although such considerations are probably way beyond moot at this point. Though they may be able to make up some ground on the BoSox, Yankees and Rays over the next two weeks of head-to-head matchups, the more likely scenario is that they split those series and end up pretty much where they are now.

And don't forget that with his acquisition by the Red Sox, the Jays will have to face the mighty Paul Byrd a few more times before the season is over. Given the fact that he easily disposed of the Jays with a 94-pitch complete game performance on Saturday, the Jays had better hope that they miss him in the rotation and draw punks like Dice-K and Josh Beckett instead.

Cito's lineup madness
It's probably best for everyone if we just forget Cito Gaston's bizarre insistence over the weekend on batting Brad Wilkerson in the second spot in the lineup. Maybe the dusty old book of baseball says that a left-handed hitter should hit second, but Wilkerson's big long wild stroke makes Adam Dunn look like Rod Carew.

Still, we're watching with interest how Cito utilizes Adam Lind. After a great game at the dish on Friday (2-4 with a couple of solid singles), Lind was bumped up to the cleanup spot on Saturday, where he promptly went 0-4. Lind was dropped to the five-hole on Sunday (0-4 again) and down to the seven-hole for the last two games, where he's gone 3-8 with a homer and three RsBI.

It's probably all a load of shite to speculate that any of this means anything, but we'd prefer to see Cito leave Lind lower in the lineup for the time being. We get that it must be tempting to move him up, especially since he is hitting better than anyone else on the roster at this point, but just let him settle in and hopefully see some fastballs with Rios, Wells or Overbay on base ahead of him.

Conspiracy theories? We got one.
A strange notion struck us over the weekend after we saw one too many hard-hit balls by Jays hitters die on the warning track: is there something funny going on with the baseballs in Toronto? We know that Colorado keeps theirs in a humidor or a deep chest freezer or something, but what about at Rogers Centre?

If the Jays pitching staff is mighty like few others (3.66 ERA ties them with the Dodgers for tops in the Majors), and their hitting is lowly like few others (only the Giants have hit fewer homers than the Jays' 81 so far), isn't it reasonable to ask whether if there is something in the environment that is causing the offense to be depressed in Toronto's games?

Somebody get us Oliver Stone on the phone.
Posted by Tao of Stieb at 10:06 AM

re: lineup - I was just fairly excited to see Kevin Mench come in to pinch run for Matty Stairs, with a presumably healthy David Eckstein sitting on the bench. After all, it's not like they would be saving triple-Eckstein for his late-inning defense.

It was our first glimpse at the post-World Series era Cito. Just feels right.

Isn't it more reasonable to just assume that Rios, Overbay, Mench, and Wilkerson were all on juice? Maybe even Rolen too, although any zapped power recently probably came from the injury problems. I have definitely noticed the same thing as you though, especially with Overbay - he's hit quite a few balls off the top half of the wall, and even more that died right at the track. Gets you thinking...

What I noticed most last night was two intentional walks to Matt Stairs (presumably to get the better match-up and keep the double play in order) but both walks bit the Tigers in the ass.

I think I would pitch to Matt Stairs pretty much all the time, but I have to concede that I know a little less about baseball than Jim Leyland.

Not that we want to pretend that it wasn't out there, but this knee jerk lazy cynicism about how every player in the midst of a down season is coming off the juice is such bullshit.

Also, if you keep track of the minor leaguers who are getting popped for performance enhancers, it's as likely to be pitchers as hitters...so your theory doesn't explain why the Jays pitchers are doing so well.

I wasn't saying I think those guys were on the juice, just bringing up a possible point of view. Rios was never a real HR hitter he was just getting mistake fastballs down and in to hit - once the pitchers starting throwing him crap away he looked helpless. Overbay's loss of some power is more likely due to a loss of some of the strength in his hand. Rolen's problems are his shoulder. Mench and Wilkerson I have no clue about, but it's certainly possible.

Don't remember the Rios bulking up stories, but so much shit is said in ST who remembers.

Just to fan the conspirital fires, the Homerdome (tripledome?) has gone decidedly in the other direction this season. So it's not just the Jays who are having problems hitting home runs there...I don't think they've changed anything, though. Maybe it's been open more often this summer?