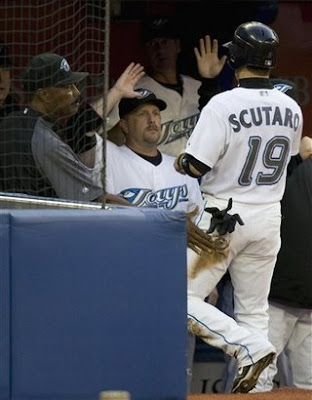 Last night's 14-3 pummeling of the Yankees was almost too much joy for one night. We laughed, we cried, we gave ourselves a shaving cream pie in the face halfway through. It was a thing of beauty.

And with this being the second time this week that they Jays ended a series against the Axis of AL East Evil with an exclamation mark, we hope that someone recognizes that this team is finally on the upswing. Scratch that: we hope that the Yanks and Sox underestimate the Jays in every series for the rest of the year.

Fun stat of the day
Roy Halladay has not lost a game against the Yankees in Toronto since Opening Day 2003.

John McDonald is the Greatest Offensive Shortstop of Our Era
Right? If nothing else, he has four doubles and five RsBI in his last ten games, hitting .297 with a respectable (for him) .721 OPS. As much as we know that you can't expect a 34 year-old journeyman infielder to become something more than he is, we still think that if he gets regular playing time and sees big league pitchers every day, Johnnie Mac can put numbers up that will be respectable enough to keep him in the lineup, and keep his glove out in the field.
Posted by Tao of Stieb at 9:48 AM

Even when he had 330+ ABs he didn't OPS+ over 75.. that's pretty awful. This year he's OPS+'d 52, which is downright horrific. I think his batting seems better this year because his clutch/leverage split stats are so good compared to the rest of the jays.

check it out here:
http://www.baseball-reference.com/pi/bsplit.cgi?n1=mcdonjo03&year=2008

we're going to fuck paul byrd up tonight. again. and halladay's record against new york speaks volumes about him. what a fucking pitcher.

Our point here was that because of his sporadic use, it's been a bit of a struggle for McDonald. He hasn't been getting the chance to see tough pitching every day...but when he does, you see some improvement in his performance.

He's never going to be much above a replacement level player offensively, but he's such a superior defender that he's worth running out there every day.

John MacDonald is a career is .238 hitter with a career OPS of .593 in over 1500 career ABs...he has hit 9 career home runs. He's been hot lately, but give him regular playing time, and he's going to produce at (or slightly above) those career numbers. You gotta get more than that from your SS.

When you pitch as well as the Jays, as long as you get average production from most of your other positions, you can carry Johnny Mac.

You make a good point. The '07 Red Sox are certainly exception.

However, you say "when you pitch as well as the Jays, as long as you get average production from most of your other positions, you can carry Johnny Mac."

I guess the problem is that the Jays don't get average production from most positions, which is why they don't win a lot of the games the pitching is good/great. Just my opinion.

Actually, after looking back at the last 15 WS champs, you don't need a SS with any kind of bat. So Johnny Mac should get regular playing time.

The debate here is whether if some players when given more regular playing time improve upon their career stats, or if they regress back the mean.

Our sense of McDonald (based purely on a small sample size and observation) is that in the past few weeks, he has had smarter at bats. He SEEMS to be going deeper into counts, laying off of bad pitches and working his way into better hitters' counts.

Point taken. More Jays need to lay off bad pitches, work the count, and take a walk now and then. I'm looking at you Wells and you Rios.

As I typed that, I realize some people will say earlier in the year, the Jays were doing just that with no success. And then Cito comes in and tells them to go up there hacking, and it seems to be working to some extent. Not that I've watched the BJs as much as some of you, but when I do, I've seen guys like Wells and Rios swing at bad pitches too often

The question is not whether a team can get by or win with a (below?) replacement level hitter at shortstop, it's whether the jays can improve their team by starting/signing a different player at SS. The answer to that question is yes.