Shannon Stewart and the Many Bewildering Levels of Perplexity 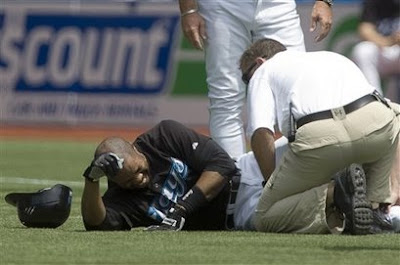 We're not sure if we're supposed to feel sad that Shannon Stewart crapped out in his second stint as a Blue Jays. We feel some sort of sadness, but it could just be a side affect of the lingering malaise that this season has inflicted upon us.

But as confused as we are about how we feel about this latest marginal roster move, we're pretty sure that Stewart's release from the team was well-earned. Stewart's prolonged absences from the lineup because of his old man's legs and his feeble performance (.628 OPS) over the 52 games in which he managed to drag his carcass onto the field pretty much sealed his fate.

All of this to preface the following question: Why is Shannon Stewart bellyaching to Jeremy Sandler about his release?

"In all honesty I don't really understand why I was brought over here, the whole experience didn't make much sense," Stewart told the CanWest scribe.

Stewart doesn't get why he was brought in at a discount when basically every other team passed on him? And he doesn't get why he didn't get all of the at bats as a DH/corner outfielder when he could barely slug over .300? And he didn't understand why the Jays couldn't have given him a shot to finish off the season in the Majors when he didn't even produce at Menchian or Wilkersonian levels this year?

When we look back at the things that we wrote earlier in the year, we were wrong about plenty of things. But when it comes to Stewart's signing, we pretty much nailed it:

Frankly, Stewart is a guy who has aged quickly, has a fraction of the power you'd hope for from a corner outfielder, can't reasonably play any other outfield position, and has hamstrings that could spontaneously combust at any moment. So we're not printing up the playoff tickets quite yet.

And because everything comes full circle
We just thought we'd mention that the Twins have signed Bobby Kielty to a minor league deal. So order has been restored anew in the universe. Peace be upon us.
Posted by Tao of Stieb at 5:06 PM

And speaking of full circle (of hell?) Paul Byrd has been traded to Boston, and is now scheduled to pitch on Friday night, against Halladay.

I don't get the "I don't understand why I was brought over here...." quote...umm, Shanny boy? You were a free agent. You brought yourself over here when nobody else would meet your asking price.

Stewart and his knees were a problem during his first stint with us so why did we even bring him in again? If we changed the turf to grass I could understand but come on guys. Even with a discount this guy was going no where.

But you take a chance and if it does not work out, oh well.