Kablammo! The Editor-in-Chief checks in on the weekend 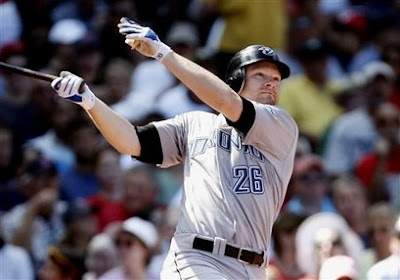 We got word from the Weekend Editor that he was coming down hard after a two-day compressed air huffing binge, so we figured we'd better set our judgments aside and open up the shop ourselves today.

Also, it's kinda hard to commit ourselves to family and relaxation when we're gleefully bouncing off the walls at the 15-4 bitchslapping that the Jays just laid upon the Beantowners.

Yah chowdah heads! Why don't you take those 15 runs and shove them up Sweet Caroline's pooper?! (Sorry about that. We're not exactly gracious in victory. Clearly, it comes from lack of experience in that particular area.)

A sweep is a sweep is sweep
Just in case you are wondering: Two wins in a shortened two-game series still constitutes a sweep in our mind. SWEEEEP, BoSox biotches!! And (excuse the Portuondo moment here): How sweeeeeep it is!

And while we should heed the perpetual admonitions of the Drunk Jays Fans to simmer down, we're buzzing a little on the idea that the Jays chopped down their deficit in the Wild Card race to seven games. What a bunch of teases these Jays are.

Don't look now, but Adam Lind is making up for lost and squandered time
It's hardly Lind's fault that he wasn't given the ABs earlier in the season, but he's certainly doing quite a job of catching up to the rest of the lineup in terms of counting stats. With his eighth homer this afternoon, he sits just three behind team leader Matt Stairs, and his four RsBI today put Lind at 34 for the season, which is within sniffing distance to Scott Rolen (38) Rod Barajas (40), Matt Stairs (41) and Marco Scutaro (42) in a fraction of the at bats.

We desperately want to see Lind take over the home run lead before the season's up. And it's not that we want to take delight in seeing a dubious player personnel decision proven wrong, but more a matter of wanting to find a reason for hope in 2009.

Roy Halladay: Still awesomely awesome
We say something along these lines every time Roy Halladay takes the mound, but Saturday night's complete game 4-1 win was yet another marvel. That's EIGHT COMPLETE GAMES on the season, more than the entire staffs of 27 other MLB teams. Only Cleveland (9) and Milwaukee (8) have as many complete games as the Good Doctor.

We're not sure if we actually appreciate on a day-to-day basis just how Halladay has moved to a whole other level in 2008. And were it not for the short-sightedness of Baseball Writers Association of America, who generally stop their examination into who deserves they Cy Young votes approximately a half a nanosecond after reviewing leader in the "wins" column, we might be able to have a really interesting debate on the relative merits of Halladay's season versus that of Cliff Lee. More on that in the coming days.
Posted by Tao of Stieb at 5:30 PM

Seven games? I call that meaningful. So I am really close to watching meaningful games in September.

Tao great post. You did a great fucking job! As for the Jays, ya know the Yanks' kryponite is AJ and Doc.Add in the fact that they have never seen Purcey.....could be a sweep. Can the Jays be like the Rockies last year? I know that the Jays are a tease BUT so what. About a quarter of the season is left and the Jays can climb back into the mix. Amen to that....

About the Cy. Damn Pedroia messes up the shutout which would have put Doc as the league leader there too. At that point, he'd lead in as many categories as Lee. I keep hoping some teams kick Lee's butt so his era goes up as the Doc's goes down. A girl can dream.

meaningful games in september, that's all we asked for...and damn right it's a sweep, and there's more where that came from startin tuesday night...fuck boston, and fuck new york. and fuck tampa, too.

wasn't rios just off the hook yesterday? and how about mac and his clutch 2 run double in the first, to really show that we weren't fuckin around. i love mac.

and i hate jason portuondo.

Alex A told Wilner in an interview today that calling up Lind was NOT Cito's call but that they had targeted calling him up after that road trip in any case and simply decided to co-ordinate Lind with the Gaston hire under the heading of "fresh start" for everyone.

He also said the decision to send him down earlier had to do with Lind trying too hard and putting too much pressure on himself.

He did not address whether or why he stayed down too long.

Now the question when they play the Yankees is whether or not the bats will keep going or if they'll even out after a good series (aka: get shutout).

I watched that air-huffin' Intervention....creeeepy. It's a good thing they sent my guy JVV, Ken Seeley would have sent her running for Staples.

Basically, my presence here is totally redundant. I feel shame.

we still got love for you, ack, don't worry.

Notice how the "editor-in-chief" checks in after the big wins over the hated Red Sox.