A requiem for Vernon Wells 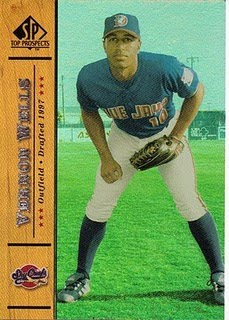 We still remember the first time we laid eyes on Vernon Wells. It was one of those late season Sunday afternoon games, where the first round draft pick gets invited into the booth to chat and drink in what is likely his first experience in Toronto.

Wells, having been taken fifth overall in June of that year, acquitted himself well for an 18 year-old, and that appearance lit a spark within us: "Is this guy going to be part of the next World Series winning team? Is this the first piece of the puzzle?" They were unquestionably high expectations. Likely too high, but as Jays fans - indeed, any sports fans - how could you resist?

Though the circumstances that led to the Blue Jays prolonged downturn and stagnation could hardly be left at Wells doorstep, he will be seen more than any other player as emblematic of the team's most frustrating decade. Wells, like the teams he's played on over the past 12 seasons, was good, but never quite good enough. He, like the team, had flashes of brilliance. But nothing that allowed them to transcend from a middling franchise into a contender.

Vernon, perhaps more than any other Jay in the franchise's history, wears the team's failure in the minds of the fans. His contemporaries, such as Carlos Delgado and Roy Halladay, will always be regarded differently, and above the performance of the particular rosters with which they played. There is even, to a certain extent, a sense that the team failed them by not creating a winning team around (or maybe more to the point, beneath) them.

Wells, on the other hand, will wear the hairshirt for the Jays of the 2000's. His injuries (which he played through to his detriment) and his absences from the lineup will be drawn out as reasons why certain teams languished. His inconsistency will be pointed out, with his OPS yo-yoing from the low .700's one year, then bouncing back into mid-.800's the next. The rapid decline of his thrice-Gold-Glove-worthy defense will come to mind, as will his quiet obstinance over staying in the middle of the order and in the middle of the outfield.

But more than anything, he'll be remembered for his contract.

In many ways, it's unfair to hold Wells to account for the contract that he signed following the 2006 season. The market for offensive players was about to blow up, with Alfonso Soriano and Carlos Lee also receiving otherworldly sums for long term deals, and Vernon's deal was never quite understood in that context on this side of the border. Moreover, the Jays' sudden bounteousness following the years of frugality which saw the exit of Delgado never quite sat well with the faithful, such as they are.

(There was a whole other post from June of 2009 where we delve into the Wells/Delgado distinction, which is worth a read - if we do say so ourself - when you have a moment. We won't go much further down that road now.)

But surely, the entirety of Wells' legacy can't be understood only by his failings and his circumstances, can it?

As Wells closes the book on his time in Toronto, he leaves having compiled one of the longest and most distinguished careers in the team's history. In the counting stats, Wells sits second all-time in Jays history in plate appearances, runs, doubles, runs created, homers and RBI (all behind Delgado), and second in hits (behind Tony Fernandez). And had he the opportunity to play one last season with the Jays, he likely would have moved into first all-time in a number of those categories. If nothing else, Wells' longevity has certainly made him a memorable part of the team's history.

Some of the rate stats aren't quite as flattering, as he drops to 12th all-time in OPS and 15th in adjusted OPS, though his sample size is often two to three times larger than some of those ahead of him. There may even be an interesting debate - amongst those of us who are insane enough put thought into such things - as to Wells' worthiness of enshrinement on the team's Level of Excellence.

But as we attempt to take a step back, even this soon after his departure, we see that a day will come when many of us will again think kindly on Vernon Wells. His 2003 and 2006 campaigns will forever rate amongst the greatest seasons ever compiled by a Blue Jay, and his three Gold Gloves will remind us of his tenacious, subtle brilliance in the outfield. And he was as smart of a baserunner as we can remember, hustling to taking extra bases often while rarely getting tossed out.

The picture we'll hold of Vernon Wells is from a September 2003 series against the Cleveland Indians, as we sat at the SkyDome and watched Wells equal, then break Tony Fernandez's single-season mark for hits in a season. His 213th hit of the season was a scorching line drive back through the middle, while the 214th was a laser hit to third baseman Casey Blake which the befuddled fielder then threw away, with Wells scampering to second. As Vernon bent over to dust himself off, we held our breath for a moment, waiting for the hometown scorer's decision: Base hit, E5 on the throw.

Vernon Wells had the record. He made history. And when it comes right down to it, that's how we really want to remember him.
Posted by Tao of Stieb at 3:39 PM

I think, after we put a number of years between us and Vernon, we'll be able to look back and appreciate his skills when he was rolling well, and his contract will be more of the 'oh, but you remember than contract?' statement that ends the conversation.

And I think (but don't really care) that he'll be on the Level of Excellence.

It was September 04 or 05 I believe and I had just plead guilty of driving while impaired. To bring my mood up my wife (then girlfriend) took me to Rogers Center (then Skydome) to watch the Jays vs. the Orioles. Vernon hit 2 home runs that night. I believe it was the first ended in the 5th deck. That's the first time and last that I've seen somebody reach that feat while I'm in person. That night he made me stand, smile and cheer on a day that otherwise would be the worst in my young life. I will always have a spot in my huge baseball heart for VW.

I got tickets last minute to a Yankees game in July 2008. The Jays made a huge comeback to force extra innings, and Wells hit a collasal home run in the bottom of the 11th to win the game. Most exciting game that I've ever seen live.

@5th Starter. I was at that game too. It was amazing. One of only 5 walkoff dingers Mo Rivera ever surrendered.

Re: Wells counting stats. He does rank first overall in one category. Outs Made.

VW was a great player and a great supporter of the Toronto community. He played hard, and never blamed anyone but himself during the rough patches, even though he was probably pretty injured.

Always fun to watch at bat, and was so graceful in the outfield making the difficult plays seem so routine since he seemed to know exactly where the ball was going as soon as it touched the bat.

And I'm just going to ignore Drew's comment re: Outs Made. Time and place, man!

Can we get a similar post reflecting on our time with Mike Napoli?

Say what you want about the injuries and whose fault/decision it was in regards to whether or not he should have been in the lineup/taken himself out of the lineup - but we never once heard VW use injury as an excuse for his hard times. Think of all the excuses, finger pointing and blaming Burnett would have made in VW's shoes. Then think of how much we would have hated AJ for it...

While I do not hold him in the same regard as Delgado, I will still be a VW fan for life...