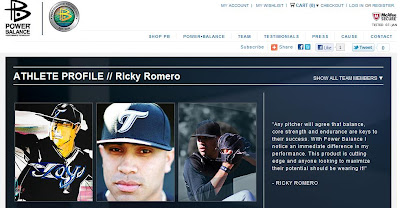 While taking a city train between Perth and Freemantle last week, we had to do a double take when we saw an ad in the car for some mumbo-jumbo sports balance bracelet made of space-age fibres and magnets or some shit. We'd usually not pay much mind to such an ad, but this particular poster featured a photo Jays ace(?) Ricky Romero amongst the product's pro sports endorsers.

(Which, when you're halfway around the world and missing the day-to-day kvetching over the Jays and baseball in general, is enough to lift your spirits.)

Our notion is that these sorts of products are about as effective as any superstition, but if Romero wants to endorse or believe in their effectiveness (and those are two separate isses), we're not particularly fussed. Hell, Shaun Marcum wore so many Phiten titanium necklaces that he could have passed for a Mr. T groupie, and we never thought less of him for it.

But now, America's leading news source (er, TMZ) wrote yesterday that a class action lawsuit has been filed against RickRo's rubber-sports-jewelry-juju provider, with the plaintiffs seeking $5 Million in damages given that there is no scientific proof to substantiate the company's claims of energy fields and optimal energy flow.

(And frankly, while we think these "performance bracelets" are horseshittery of the highest magnitude, we don't particularly think that anyone in their right mind can claim to have been damaged in any way by these dinky little bits of crap. It's not as though anyone is going to seek out the companies that made friendship bracelets back in the 80's and complain that they in no way ensured that those was received them would remain a best friend forever. Although, yeah, we can see why someone with a lot of time, energy and a more profound sense of justice than us would see the need to have the snake oil salesmen taken to task.)

In his page on the Power Balance site, Romero gives his pitch for the product: "Any pitcher will agree that balance, core strength and endurance are keys to their success. With Power Balance I notice an immediate difference in my performance."

And for a half-second after reading what is purported to be Ricky's thoughts on the product, we got a bit concerned that there may be some chance that a) He said that and b) He truly believes. Will news that Power Balance offers no particular advantage to an athlete's balance or power adversely affect his delicate, gullible psyche?

Thankfully, a quick glance through Daylife's photo archives of the hurler shows no evidence that Romero ever wears the Power Balance bracelet in the heat of battle.
Posted by Tao of Stieb at 7:49 AM

And if you don't like the friendship bracelet I made you, all you have to do is say so!

So this is what that Insane Clown Posse song was about.

That means that he'll never make the Hall of Fame now. No writer will ever vote for a pitcher that used PEDs (performance enhancing devices).

The question mark for RickRo's acedom has to do with my belief that Brandon Morrow is going to throw four no-hitters next season.

I think Dirk Hayhurst was on CBC a few months ago in a bit the merits of Phiten Necklaces. I can't recall what the conclusion was, but if it isn't hurting the players, then I don't see a problem with it.

Yeah, Dirk's point was (I think) pretty much along the lines of "Of course it's probably BS, but it's not like the players ever have to pay for them anyway, so why not?"

Ricky's ringing endorsements of the bracelets probably have a lot more to do with the real perks (he mentioned on Twitter that Power Balance had given him free Lakers tickets last week) than the more questionable effects of the actual product.

I don't know why for sure, but I have always been skeptical of Ricky Romero's success and feel like the ball could drop at any moment. Could be his mediocre minor league numbers?

Anywho, I expect Brandon Morrow to become the teams ace.

I'm glad that you had a chance to visit Perth Tao! I am a Canadian Jays fan and regular reader that has been living here for 3 years, and I absolutely love it! Hope you got a chance to get to Rottnest Island and indulge in the amazing wineries here in Perth and in Margaret River!

RickRo's bracelets is that made friendship and complain that they in no way ensured that those was received them would remain a best friend forever. Thanks...

Incredibly good write-up! Could you follow up on this incredible matter?