Far away, so close 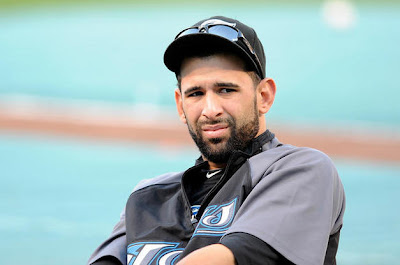 So there's about three million bucks difference between the Jays and José Bautista, which seems like a significant gap betwixt what the team thinks he's worth and what he thinks he's worth. Except for the fact that we suspect that neither party actually believes that's what Bautista is worth, nor would be willing to chisel those numbers into granite.

Given the process within which they find themselves, the Jays were smart not to allow themselves to go overly high in their offer to Bautista, lest he snatch it up and set his course firmly towards a mostly barren free agent class follow the 2011 season. Their offer might seem low or untenable, but they couldn't paint themselves into a corner where they had no leverage while negotiating a medium or longer term deal.

For that matter, Bautista's responding figure seems low as well, and likely below what he'll eventually ask for when a multi-year agreement is presented. (And much more palatable to an arbitrator, for that matter.) Given the Jason Werth horseshittery and Dan Uggla's deal, we're figuring that JoBau's desires will be in the five-year, $65 million range, and that the Jays' offer would be closer to three and $33 million.

(We're pulling numbers out of the air here, so don't take this as anything more than jibber jabber.)

The point here, we suppose, is not to get overly set on the actual figures that have been floated thus far. They are negotiation points, but not true statements of worth or assessments of player value. And following the logic of what we said yesterday about the meaning behind the small divide with Jason Frasor indicating a larger divide between the parties, we actually think that the largish gap between Bautista and the Jays is an indication that both sides are willing to push this process to the very end, and continue working towards a longer deal rather than a one-and-done.

Which, if you think kindly on JoBau, is good news indeed.
Posted by Tao of Stieb at 10:01 AM

Nice to see a post from someone who has seen through the numbers and media over-exuberance. I believe you're right in your assumption-great post.

It's probably in the Blue Jays' best interest to bid low and see how the season goes. If Bautista starts off 2011 like his 2010, then they can offer him a multi-year deal. If 2010 was a Brady Anderson year, then they won't lose as much.

Of course, I'm hoping that he continues to pile up homers for the Blue Jays because it's a great story.

5 years and $65 million doesn't seem all that horrible to me. However I suspect this is probably about $20 million short of what it would take over that period. For some reason the number $17 mil per year is number I expect he wants.

Yeah, Peter...You might be right. The number I threw out - admittedly straight from my ass - might be lower than he'll want. But I think he might settle for $13 million over two or three years.

(Now, let's all take a step back, pretend we're in the last offseason, and consider what we'd have all thought of a $13 Million contract for Jose Bautista. That shit woulda been crazy then.)

I was actually a bit surprised when the Jays offered him arbitration after the 2009 season knowing that they would have to give him a raise on what he made that year.

Let's hope next year we are hoping Rajai Davis signs a $13 million per extension.

You have to remember to take Bautista's age into account. Bautista is looking for a deal to take him into his late 30's, not mid 30's, so he's looking for around 7 years +.

He's 31 this year, and a 7 year deal after next season will bring him to about 39, whereas a 5 year deal will take him to 37, where he will definitely be declining and be really hard pressed to get another deal after that.

5 years won't cut it from any team.

Empty out your pockets and throw the lot upon the floor...

how the fuck do you know any of the bullshit you just spewed out of your mouth? you have sources? i don't believe you. how could you possibly know he is looking for more than a five year deal? how do you know the jays haven't even offered a 3/30 type deal?

Aside from the fact that NOBODY is giving him 7 years.

As vulgar as the post above me is regarding GCM1970. I do agree with him.. Thinking that Jbau all of a sudden wants a 7 year deal is absolutely redonculous. He made 2.4 million this year, even he was amazed at the numbers he put up in 2010.

I think its a stretch to assume at this point he could even get 50 million. However if he does hit atleast 30 in 2011, he'll fetch a 50+million contract, a 4 year deal pretty easily..

I think the Jays would be wise to lock him down to a two year deal, with a mutual option.. lets say 2 years 21 million with a 3 year at 14 million... you figure that, if Jbau regresses back to 15 HR form, the Jays will only have to suffer for 1 year, his defensive flexibility makes it tolerable.. and for Jbau if he punishes pitchers again in 2011, he'll only have to wait 1 more year to hit free agency. Both sides are covered both ways.

but GCM1970, your post was beyond idiotic.. you should be banned from all things baseball

No way JoBau is looking for a 7 year deal! No one in theor right mind....except for the Nationals GM would consider that length.

gcm1970. that post of your has to be the most stupidest fucking thing that i have read today. what are you a fucking mindreader? are you a vulcan and you mind melded with bautista? what possessed you to pull that shit out of your head and then post it. i hope you are embarrassed of yourself. like that other poster said, you don't know fucking shit. idiot.

Wow...just wow. I'm not sure the reason people have become so emboldened to sit behind the protection of their computer at their keyboard and then lambaste someone. I'm sure some young Jays fans read and post on this site and have to put up with posts like the one above. For all you know, the poster who you attacked is 13 years old and is just reiterating what he or she has simply seen posted on other sites. If you are 13 yourself, then I'm speechless.

By the way, you don't have to use the word "most" when you use "stupidest". The use of "-est" on the end of a word implies most.

I don't know for a fact that Jose is holding out for Jayson Werth money, but I wouldn't be surprised if Adrian Beltre's five-year, $80 million contract was the starting point in negotiations.

The Jays have some leverage here, since Bautista's value could drop significantly if he winds up around his .794 career OPS in 2011. You could argue that he may do a lot worse, as that number is largely inflated by his .995 mark last year, but I'd like to think that given a full year of at-bats, he's good for 20-25 home runs. Based on that, and the fact that he plays solid defense at multiple positions, I think that in the worst case scenario, he gets $30-35 million over three or four seasons on the open market next year even if he does regress a lot in 2011, so I don't see him settling for that kind of contract now.

I think he'd be smart to consider $45-50 million over four or five years, but it wouldn't shock me at all if it would take five years and $60 million to get it done right now.