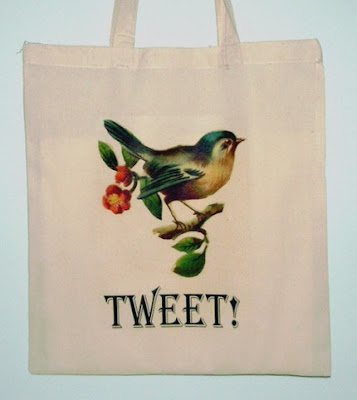 We're not going to stop writing up tweet bags until we stop finding new pictures of tweet-themed bags in Google Images. Which is to say, we will never ever stop.

Our pal (and part time JoBau impersonator) @eyebleaf asks: When will you open your heart and let Shawn Camp in?

Here's the thing: We're pretty fickle on Shawn Camp, because we truly believe that he is a shitty-shoed bastard whose modest success is mostly attributable to guys hitting balls right at the fielders. But then, maybe we were just conditioned to dread seeing him in previous years because his initial usage was as a mop-up guy.

Either way, we just don't have that much room in our cold, cold heart for some jug-eared, high-socked, noodle-armed, replacement-level sorta-side-armer. So to answer your question: No time soon.

Frequent commenter (and the life of the party in Caribou, ME) @FlagrantFan asks: How would you rate the Blue Jays broadcasting crew?

True story: We recently, apropos of nothing, found ourselves missing Buck Martinez and Pat Tabler. Because whether if we always agree with them or not, we love to listen to them talking baseball.

Which brings us to a point that we've been trying to make for some time: People need to back the fuck off when tearing down broadcasters, because the whole parlour game of holding them up for ridicule has reached its saturation point.

We actually don't expect our broadcasters to be perfect or to share our worldview at all times. But sure, if you think that a broadcaster is consistently awful and off the mark, then make that comment and let it go. But don't jump on every word out of their mouth as an exemplar of their vast inferiority to you on all matters baseball. Because every other douchebag is doing the same thing, and it is more tiresome to listen to than any Jamie Campbell baseball card story.

(And since you asked: Alan Ashby is the most awesome colour man of all-time. We just want to invite him over for a cookout, and drink beer and talk about blocking the plate for a whole evening, until the sun goes down and the patio lanterns flicker.)

Bring it on! @davebrault asks: Who's the 5th starter?

Before we answer that: Can we just point out that the fifth start last April was Dana Eveland? And that in 2009, it was Scott Richmond? And before that, there was Tomo Ohka and Josh Towers. So the point here is: Don't sweat the fifth starter too much. Because they might not make it into the warm weather months with the team.

But, to be a sport, we'd say that we figure that Marc Rzepczynski is a pretty good candidate. In part, we say that because of his stellar showing in the Arizona Fall League (1.16 ERA!). And in part because Drew told us he's better than Gio Gonzalez. (That's exactly what he said!)

To the barricades! Rule-breaking non-tweeting questioner @PdcD sent us an undergraduate thesis by email, when he really meant to ask: Lind/EE: Can we expect a gong show defensively at 1B in 2011?

Probably, and we've started to steel ourselves to that possibility. On the other hand, Lind looked okay in his handful of appearances there last season, and EE's biggest problems at third were due to his arm as opposed to his glove. Edwin's footwork got him into troubles when he was coming up to throw, but we actually think that he could develop into a decent scoop at first.

And besides: Matt Stairs played a lot of first a couple of seasons back, and the Rogers Centre didn't implode around him.

Also: If this Eric Chavez thing ever comes to pass, don't be surprised if he gets time on the other side of the diamond.

And finally: Don't expect anyone to do what Lyle Overbay did over the past few years. Lylo was a pretty special fielder, and you don't just replace that with a couple of sessions with Brian Butterfield down in Dunedin.

Quickly! @stillJRM asks: brett lawrie has no chance to stick with the team out of spring training, correct? #settleabet

Probably not. But stranger things have happened. Sorry, but we can't settle your bet. We're not a soothsayer. And besides: Stop betting. You degenerate gambler.

More more more! @twnspn2nowhere asks: Lawrie working at 3B. If that works out, what kind of lineup do you see for 2012? Change plans for FA this year?

There's many a slip betwixt a cup and a lip. (And we say that mostly to get the word "betwixt" into two consecutive posts.) But if Lawrie works out at third, we'd figure that Hill and Escobar will stay put, but with Hechavarria breathing down Hill's neck. First base might still be a problem, and it's not out of the realm of possibility that Lawrie follows the Matt LaPorta path to being a full-time first baseman after wearing out the rest of the diamond.

That's it! But a pretty bow on this one, and we'll catch you on the flip side!

apropos - isn't that what shows up sometimes instead of an apostraphe? e.g. isnapropost, LOL

Gone would be Encarnacion, Hill and Bautista. Don't think we'll be able to sign Bautista to a long term deal. and Hill may be traded to make room for Hech if both Hech and Lawrie have great seasons.

Longshot - Blue Jays make playoffs this year as the wildcard and go out and sign Albert Pujols to a long term deal and return Lind to DH.

One can dream, can't they?

You know for sure that the Yankees and Red Sox can't outbid, they already have 1B long term.

I just hope to God that St. Louis doesn't extend him by the time the season starts. Imagine this lineup:

Great post. But...uhh...I didn't mean to open a can of worms with the broadcast team thing. Didn't know there was already a turkey shoot in progress.

Haven't heard the Blue Jays announcers in a long while. They have to be better than Tommy Hutton who now covers the Marlins in his usual syruppy mess.

Shawn Camp is the Jim Acker of this Jays generation.

I couldn't think of a better endorsement for Shawn Camp.

Your opinion on Camp should be backed up by numbers or you just seem like a turd (which you are, but do you want to make it obvious?).