He's big and he's got a neck tattoo 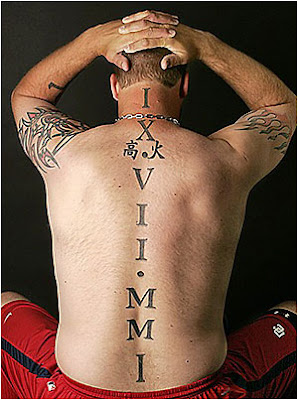 Given the speed at which the closer carousel has spun about this offseason, we're reasonably happy to see that when the music stopped, we were looking way up at the 6'11" Jon Rauch as the most likely option to close games next season.

(Oh, but don't let that stop you from speculating on who will eventually get the role, because frankly this thing is going to get drawn out and dragged through just about every story coming out of Spring Training. And given what a cagey guy Alex Anthopoulos is, we're guessing that there will be platitudes about the "open competition" coming from he and John Farrell, while Rauch and Octavio Dotel and Jason Frasor and - to a lesser extent - David Purcey and Shawn Camp all have their names tossed around as possibilities.)

Given that before the offseason started, we were leaning towards Rauch's teammate Jesse Crain as a good option, we think the Jays made out pretty well on this deal. Rauch posted an xFIP of 4.18 versus Crain's marginally better 4.10, but it took three years and $13 million for the White Sox to wrap up the pseudo-Canadian. For a very manageable $3.75 for one year (with an option), the Jays get a better deal on a guy who - INTANGIBLES ALERT! - has closed out games before.

(Also, we probably hold a special scented candle in our heart for Rauch because he was the last Expos pitcher who we saw pitch in person. On Sunday, September 26, 2004, Rauch cleaned up a mess against the heart of the Phillies lineup in the ninth inning at the Big O.)

The Jays didn't blow their minds out on a marginal closer, and if there is one thing that we should have all taken away from the later, unproductive years of the B.J. Ryan deal is that overcommitting a lot of money to a guy who's going to pitch 50-odd inning for you is not the best way to build a winner.

With a handful of options emerging through the Jays system and a number of options seemingly available on the free agent wire every year, it's a smart move for the Jays to shun the mythology of the big money closer and make a smart signing like this one.
Posted by Tao of Stieb at 10:30 AM

I guess on days Camp can't take the ball, Rauch will do.

...but seriously, I like this move. And suppose I should take back my previous bitching about the relief market wait-out stance.

That is a frightening image. Well, I guess we know which gang Rauch will join if he goes to prison.

The Jays' bullpen is looking surprisingly deep all of a sudden. If Rauch is the closer then Dotel can actually be used properly (i.e. never against lefties) and with Frasor, Camp, Purcey, Janssen, and Villenueva that's already a pretty full bullpen without even mentioning any of the other candidates.

Considering the bullpen was supposed to be one of their biggest weaknesses this year, it's looking awfully strong these days.

Only one lefty? Or does Carlson get in there somehow?

I'd imagine that if Rzep doesn't make the rotation he'd be in there as the 2nd lefty, although he'd be a lot more valuable as a starter... left-handedness aside, I don't think Carlson is really a better option than those other guys. Maybe an 8-man bullpen wouldn't be a bad idea to start the year? Then the bench would be Rajai Davis, John McDonald, and... actually, who else?

Molina as backup catcher and probably EE, assuming they sign someone to DH. If they don't maybe someone like Mastroianni (sp?)