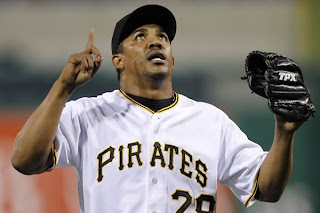 I'm going to be completely honest with you here, friends.

I have no idea where I'm going with this post. Inspiration in these (what's the opposite of dog days?) of winter isn't exactly found with a simple Google news search of 'Toronto Blue Jays'. You'll get articles on shoo-in Hall of Famer Robbie Alomar, "news" of the Octavio Dotel signing, and articles about how these young Jays aren't ready to go all-in just yet (because constructing a contender is exactly like a poker hand).

So let's kick around the Dotel bit. What to make of it? I don't know. As I'm sure you've noticed if you've been paying attention - and I certainly won't hold it against you if you haven't been - I'm really neither here nor there with it. It seems like a carbon-copy replica transaction of the team-friendly Kevin Gregg exploit signing: reel in a middling "name" relief arm close enough to compensation status on a one-year deal, hoping for a best & likely scenario of reasonable performance resulting in a freebie Type-B sandwich pick. And if The Player sucks, decline the option and/or don't offer arb.

Worked well enough for Kevin Gregg, who has recently roped the OriLoLes - oh, those silly little Orioles - into a potential $16-$20 million dollar contract. You read that right. Lest this curious vesting option not come through for ol' Kev, it's still $10M guaranteed. You're welcome, Gregg.

And while Dotel might just come with even scarier numbers - and not the good scary - from the season prior, ask any Cubs fan how they felt about "losing" Kevin Gregg. Let me tell you - I know one or two, and they were downright giddy. It was embarrassing for me.

So it worked before. And it might just work again. But let me tell you something else - I'm starting to get juuuust a little leery of the whole "let's exploit the free agency compensation system and collect draft picks at the expense of signing premium players" strategy. Admittedly, the bullpen is as good a place as any to work the system. And perhaps signing the veteran allows the Jays to groom an in-house arm - a hard throwing youngster not seen as a future rotation piece - as the next great Jays closer. That would be, to me, the ideal.

But at some point, roster construction has to be about more than hoarding picks to strengthen the system. Those assets must be parlayed into a stronger major league roster - be it via trade or free agency. That time will come, of that I remain confident. Even if it's become apparent that it isn't going to be this year.
Posted by The Ack at 11:19 PM

I believe in Octavio.

I do not believe in the Orioles.

It's tough not to get impatient, especially when there is a guy out there like Raffy Soriano who no one seems to want and may be had for less than market.

That being said, Dotel is probably the right move for now, adding an elite closer should be one of the last moves made and hopefully they can find one from within the organization (Purcey, Stewart???).

These are 2 separate things and don't need to go hand-in-hand. I'd rather see Dotel flop than be stuck with another BJ Ryan

I'm really wanting to pull together a Gregg-versus-Dotel post, because I FEEL better about Dotel being the 9th inning guy. But I don't wanna take that to the bank.

But Gregg as the OriLOLes closer for a while? I like it.

The other thing to keep in mind is that this compensation system will be out the window in the next contract, so this may be the final time this can be done. I'm ok with it because I never thought this would be the year. There's still so many question marks.

That's kind of the problem I'm having with the whole offseason, and wanted to post about, but couldn't figure how to do it wothout coming off as a whiny little douche (more than usual):

What happened to addressing all these issues? What about the heavy trade activity hinted at? The primary goals heading into the winter were addressing 1B, 3B, OF, and replenishing the pen.

3B/OF - Bautista would hold down whichever spot didn't get filled. So is Rajai Davis the big acquisition there?

I just expected...... more. I'm still on board, but I can see how the Rogers haters are filling their cups. Another year of hurry up and wait, goes the argument.

@Tale: Are you kidding? I'd love to have another BJ Ryan! He was absolutely lights-out in his first season with the Jays - 38/42 in save opportunities, 0.857 WHIP, 86 Ks in 72 1/3 innings - and possibly could have posted similar numbers had he not exploded his arm in '07.

*...similar numbers over the rest of his Jays career had he not...

I completely agree with Ack, and frankly, I think if Anthopoulos ever spoke candidly, he'd say the same thing.

I think it's just turned out to be a disappointing offseason because of the way the balls all bounced. I truly think Anthopoulos intended to complete all those tasks Ack mentioned, and it just didn't come together.

It's hard to know what's fact and fiction when it comes to the Jays in the news, but it seems pretty apparent that they were very close to trading for Dan Uggla, and there were reports right after the Justin Upton rumours began that the Jays instantly made a really strong push to get him. That seems exactly like something Anthopoulos would do, in regards to Upton. Approach the Diamondbacks GM, try to strike quickly with an offer, but then when the price just didn't make sense, back away. To a degree, it's what happened with the reliever market too. The Jays were reportedly in on a bunch of the better relief pitchers earlier in the offseason, like Crain and Guerrier, but when they started handing out ridiculous three year, relatively big money deals to them, Anthopoulos had to back away, and wound up having to settle for Dotel.

As much as it's been a disappointing offseason, it probably isn't fair to assign blame to Rogers or Anthopoulos here. If they would have traded for Uggla and/or Upton, those would have required adding a fair bit of payroll, and by all accounts, those moves were definitely in play.

In the end, the real importance of this offseason may be the experience Anthopoulos gained from it. He wanted to rebuild the bullpen, but when the relief pitcher market went crazy, he got completely shut out. It's safe to say that he would have loved to trade for someone like Justin Upton or Colby Rasmus, which would have shored up the RF and 3B (with Bautista moving to 3B), but the other GMs simply wanted too much for it to make sense.

At the end of the day, I think the offseason even managed to teach the patient Anthopoulos about patience, and we've seen that as the offseason played out. While the cost for acquiring a player like Upton or Rasmus may be ridiculous, there will be a day when it simply seems less ridiculous. And the more high-level prospects Anthopoulos stocks up on, the easier it will be to move them for big league talent, even if based on value, it's an overpay. Considering how much talent the Jays added to their farm system in the past year, it gets exciting to think how that system might look in another year. At that point, trading away three or four top prospects will leave far less of a dent in the system.

This turned into sort of a ramble, and maybe it's just my own attempt to rationalize a disappointing offseason.

But hey, maybe the offseason isn't over yet. The Jays are still in a position to sign a DH like Manny Ramriez or Vladmir Guerrero, which would add some fun to the team, and make their offense better day in and day out. And if the money is really there, maybe they pick up a bad contract - say, Michael Young with half of his salary eaten, for little cost in terms of trade assets.

Or maybe we go into 2011 just like we went into 2010. Hoping for the development of young players, and mostly just watching some fun baseball while we wait for the really fun baseball down the road. I guess things could be much worse.

Heyo Bret - that blog post I wanted to write but couldn't figure out how?

You just did. Boom. Nice.