Junk from the Tickle Trunk 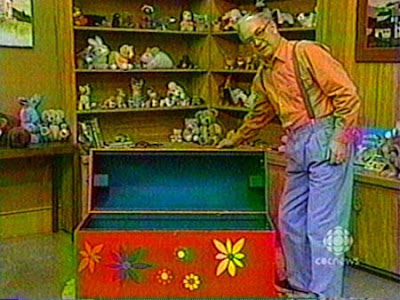 Because there's precious little out of which we could make a full blog post, here's a few randoms notions which have yet to be formed into an actual idea. (We might not even punctuate this stuff by the end.)

Caravana!
So the consensus is that everyone is just so goddamned gleeful that that Jays have pulled a few of their players into the chilly north to go talk with the fans hither and yon across the country. And ain't it just darned swell that they've gone back to the olden timey days when they did this, and everyone got to know and love Ernie Whitt, and AWWWWW SHUCKS!

Don't get us wrong here: We're not really begrudging this marketing, promotion and PR blitz in the middle of the winter. But we also don't necessarily feel like the Jays owed us this sort of interaction, nor do we think that it is going to seriously move the needle on fan support this year. It's not to say that you don't do it, but winning is the primary thing that is going to get the team to a point where they're playing to something more than a half empty (HALF FULL!) Rogers Centre this year.

Anthony Gose invades my soul
With a lot of empty space to fill up the spot in our brain that obsesses over the Jays, we've spent an inordinate amount of time thinking about Anthony Gose this month. The man who came to the Jays in the Brett Wallace trade (which we'll freely admit sent us into paroxysms of rage) seems to sit out there in the ether, like some distant treasure of unknown power and value that we'll only possess after a long an arduous journey.

(Note to self: Avert your eyes next time you see Lord of the Rings on TV. For Frodo's sake.)

The stats that Gose put up this year are pretty difficult to translate into any sort of tangible conception of his future major league performance, though we'll continue to spin the tale about how he had similar numbers to Carl Crawford at a similar age and level.

Lacking anything more concrete than that, we just go and watch this video of him on YouTube and admire the cut of his jib. (Maybe too much.) High socks! No batting gloves! Willie Mays' number!

We're reasonably certain that our Gose fixation is going to turn into a daily scramble towards the boxscores at...well wherever he ends up this year. (Dunedin? New Hampshire?)

Octavio, reconsidered
Maybe it was some Pollyanna notion that we had that, all things considered, Octavio Dotel wasn't a bad pickup and could close for the time being for this team. But the longer we think about his crappy numbers against lefties, and his propensity to give up the long ball, the more that we realize that this is an arm that was never meant to pitch high leverage innings in the American League East.

Sure, Kevin Gregg tried to throw around batters all year, with varying results. But the notion of Dotel pitching to Big Papi in Fenway or Mark Teixeira or Robinson Cano in Yankee Stadium gives us the shivers. It's made us unusually eager to see Brian Fuentes get signed, posthaste.

(Then again, we also have this notion that the Sausage King is going to end up closing this year anyways, so what's the big deal?)
Posted by Tao of Stieb at 9:59 AM

I don't know what to think of Gose either, so I chose to trust the unquantifiable opinion of the scouts for now. Either way, he's a still a ways away from the majors so you'll have plenty of time to read the box scores.

Fuentes is a better closer than Dotel, but if his price and or term doesn't come down a bit, I'd rather the bad closer in a transitional year.

The whole Caravan thing is probably a much bigger deal to us Western Canadian folk ("they know we're our here!!!!") - though they skipped the frosty old 'Peg - and while it won't make a lick of difference in attendance at the 'Dome, it can't hurt the intangible "buzz" factor. And TV ratings. Precious, precious TV ratings.

I don't know about this Fuentes business. I guess one of Carlson or Roenicke has the most to lose, but personally, I'd rather see the team groom one of the young arms to be The Man as a homegrown solution to the closer spot...which ain't gonna happen if AA keeps bringing in mediocre (?) veteran arms. Problem is you'd have to convert a starter to relief, which isn't exactly the best developmental (or value-based) idea out there, but given the sheer quantity of power arms in the minors? Whythefucknot, amiright?

For a fast guy, Gose stole a lot a bases in 2010, but was only successful 58% of his attempts. That's a lot of outs on the basepaths. Hardly inspiring unless A+ League catchers are simply the best catchers in the world right now.

As for Dotel, yeesh. Good luck with that.

I heard that Gose was taking off virtually everytime he was on first base, not picking and choosing his spots. let's just hope he's learning from his mistakes.
I don't mind the veteran arms for now. It'll give the Jays time to distinguish who the Romero's are and who the Purcey's are. Eventually I believe we'll have primarily home grown relievers to go along with home grown starting staff.

The Caravan is skipping out on Thunder Bay as well, Ack. If it was truly a caravan, they'd be driving through the country and have to hit the 'peg and T-Bay, wouldn't they?

The caravan may not make a big difference this year, but I see it as the kind of thing that gains momentum each year as people get used to it. It becomes a family tradition that kids look forward to. I think it's great.

Oh, and Gose's numbers may have been uninspiring this year, but it's not like Wallace hit up a storm. And he has to hit up a storm, because he can't do anything else.

Seriously, I can't fault anyone for skipping the Thunder Bay to Winnipeg route. That's a hell of a jaunt.

(And I don't think that they are crossing the country together in a VW Westfalia.)

Love the tickle trunk. Such great memories. The winter tour I think helps get the young kids interested in the jays which might help attendance TV ratings down the road. I sensed this from watching the video from day one. The team should focus on improving the sky dome experience. My ideas are wider seats, a goofy looking mascot like what the Phillies have, prime minister races (like the presidents race at some American ballpark), paint the interior roof dark blue and have fancy light displays when a home run is hit instead of fireworks, more interactive stuff on the jumbotron. I'd also like to see a blue jays network with more original programing and where they replay the nights game all night and show classic games in the offseason. I'd pay $5 a month for that. Great blog, keep it up

U guys think there's a chance AA would bring in Vlad to DH and putz around the outfield for a year. Would be fun to watch vlad swinging away batting 5th. I'm guessing at least 6 mil a yr for the bad back hack.

three months ago i have problem which is typical of all of us ! what should do and how to go on living, I did not understand ((I stopped smiling at ALL!!!! :( yes!!,i have bad teeth because of heredity ... why it so? Teeth is the first thing you see when chat somebody,or doing smth like this, I found a solution in putting lumineers ! and i can say it has guaranteed 100% result,also i think its a good investition

Gosh, there is really much worthwhile data here!