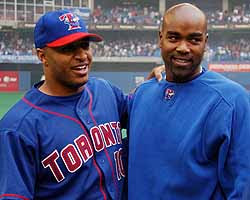 It's been an odd and fascinating few weeks as a Jays fan, as we've watched the team's fan base turn on the team's putative cornerstone offensive star, Vernon Wells.

(And before you go any further: We're making a distinction between the team's best player, which is clearly Roy Halladay, and the team's best position player. There are different expectations for each category, and they really aren't evaluated one against the other. Whether if they should is a totally different debate, which we can have on another day.)

What started out as frustration tempered by optimism has evolved into outright contempt as Wells performance at the plate, in the field and in the public sphere have all tanked this season. The expectations for Wells - a former first round pick, All-Star, Gold Glover and Silver Slugger - are astronomical, made all the more so by the sheer heft of his contract.

And while we've tried to separate Wells' performance from his remuneration, there's no question that the numbers he'll pull down in the coming seasons will have a severe impact on the team's payroll flexibility. Which means less money to resign players or to pick up key free agents. Which means finding a new level for the Vernon Wells Hatred Advisory System.

What occurs to us is that Wells is being held to a standard which very few other players could ever live up to, in part because of the long shadow cast by the last centerpiece star of the franchise, Carlos Delgado.

We probably didn't appreciate at the time just what an outstanding offensive player Delgado was. In fact, we seem to recall plenty of occasions where people picked nits over specific at bats or his performance in "clutch" situations. And yet, Delgado drove in more that 91 runs in each of his full seasons with the team, posting a garish .949 OPS for his career with the Blue Jays. King Carlos posted six of the 10 best single season OPSs, and holds the team records in runs, walks, total bases, homers, and RsBI.

Delgado's performance over his 12 years of service to the Blue Jays is the Gold Standard for Toronto hitters, and he established it just before the mantle of the team's best player was handed over to Wells. That's a hell of a shadow for Wells to step out from under. And in all likelihood, he never will.

(In fact, we're not sure who ever will. In our happiest springtime dreams, we saw Travis Snider becoming a 40 homer, 120 RBI force in the middle of the lineup over the next decade, although it's amazing how quickly those dreams were dashed.)

Because Wells came of age in the Carlos era, it's easy to forget just how long he's been a part of the franchise. Seemingly, we've been certain for several years that he was about to step up and transcend to the next level of stardom. That's why almost everyone at the time was completely on board with the contract extension that Wells signed: Vernon was the Franchise, and we couldn't afford - for baseball reasons and others - to see him walk away.

Certainly, the flashes that we saw out of Wells in 2003 and 2006 were enough to keep those notions fueled for years afterwards. But Wells was never a player who was going to play every season at those levels.

Wells is what he is. He won't ever be much more.

Only three batters (Delgado, Tony Fernandez and Lloyd Moseby) have made more plate appearances as a Jay than Wells, so we should be able to get a pretty good handle on where he stands amongst the team's all-time greats. And given two more average seasons with the club, Vernon will find himself moving ahead of the names in the pantheon - Bell, Barfield, Fernandez, Moseby - into second place in many of the team's all-time leaders list in key offensive categories.

What Vernon Wells will never do, though, is live up to what Carlos Delagado did on the field.

Moreover, he'll never be the central figure that Delgado was off the field. Delgado was a friendly, gregarious and cerebral player who was ready for the cameras and mics, and who gave thoughtful and honest quotes that didn't seem as though they'd been hashed out through hours of media training. Even in his most contentious moments, like when Elliotte Friedman, then of the Score, took the team's star to task at the end of a dissapointing season and affected shock when Carlos responded with fury, Carlos always seemed to be willing to take the role of team spokesman and handle it with aplomb. (Some might say that Delgado liked and sought out the attention, but again, that helped set the standard for what we expect of the franchise player.)

Wells, on the other hand, is a downcast mumbler whose answers to the media are stultifying to the point of being insulting. He's never seemed comfortable stepping into the lead role in speaking for his teammates, and when he is put into the position, he rarely offers anything insightful or inspiring.

None of this is fair, really, and we'll confess to that. One of the reasons why Delgado left such an indellible impression on Jays fans is that he left before his level of performance dropped off too far. And even at that, people were ready to chase him out of town at the end, because of (go figure) his contract.

Given the seemingly untradeable contract that Wells has, we'll likely get a good long look at his career's decline. And while it could very well be that by the end of his time with the Jays, Wells ends up as the second best position player in the team's history, he'll never have grasped at the levels that Delgado reached. And he'll always be seen as a failure for it.
Posted by Tao of Stieb at 12:00 PM

To me, he really needs to pick up his game to earn the title.

But now I'm trying to think of people I'd put ahead of him and I start doubting my choices — was Alomar here long enough? Does Molitor count? This is one tricky topic.

Wells isn't amongst the Jays top ten in some rate stats, including OPS. He'll end up there in doubles, homers, hits, and probably RsBI, but counting stats are often more of a tribute to longevity rather than performance.

We'll cop to that, for sure.

Carlos really was the King. I miss that cat, he was phenomenal.

I want Vernon to be mad. I want his play to be making him sick to his stomach. I feel like Delgado would have done that.

It seems out of the question that Wells will turn his season around, sort of how Carlos did last year, but I can dream. It's what I'm good at.

Carlos was the best Blue Jay ever

He was so consistently good for so long that it was taken for granted.

Vernon, really starting to hate him. There is a vibe about him that I don't like. That contract is the worst thing to ever happen to this team.

I have some hope that if Wells keeps on sucking he will show some pride and opt out of his contract.

It's a million to one shot cause the PA would probably never let him do it but...

I honestly do think he will start to come around shortly and hit to his career numbers for the rest of the year and the next 3 years or so.

If Wells opted out of his contract, it would be a sign of stupidity, not pride.

The Jays offered him the contract and backloaded it...he shouldn't feel any obligation to take some sort of noble way out, even if he sucks.

This might be the last major league contract that he plays under, so walking away for more than $45 million would be a totally bone-headed idea.

I wouldn't give up on Snider as the next big franchise player. After all he is still younger than the Blue Jays 2009 first round draft pick. He also has better numbers than Vernon Wells this year.

That logo was unfortunate.

Cheer up, everybody! Halladay's improving:

For those that haven't read this Verducci piece about King Carlos, please do:

I am now going to troll ebay looking for a Delgado jersey.

I loved the T-Bird. I'd take it any day over the Black Jays shite we have now.

if wells' performance isn't making him sick to his stomach, then he probably isn't human. i don't care how much he is making, i've got to believe he doesn't like being booed off the field after every out he makes

Great post. One thing though. You said, "Wells is what he is." But who is he? Each year he is up, he is down. His stats are all over the place. 2006 good. 2007 bad. 2008 pretty good. 2009 really bad. It's one thing when you can count on a guy to provide one level of achievement and then state, "that's what Wells is." But you can't do that with Wells because he is all over the board.

One other memory of Delgado. I always loved when there was a highlight of Delgado's homers on ESPN's Sport Center. One of the announcers would say, "Delgottit." Always made me smile

There is a reason that even after 5 years we still call him King Carlos. He WAS the franchise for the majority of 12 years.

It's nothing against Wells that Jays fans on the whole don't hold him in the same regard. You make an excellent point that it wasn't just on-the-field that made King Carlos, and we haven't really had someone like him for the media side of baseball since he left. Part of me enjoys the quietness of the current Jays (led by Doc's example...no wonder they're quiet), but sometimes it does feel slightly lacking. (But if that's what we have to take by having Doc, I'll take it.)

But I know for my generation of Jays fan...we grew up and the Jays were Delgado, Delgado was the Jays. He's so inextricably intertwined with my love of the Jays that I can't imagine what it would have been like had be never played in Toronto, and that has nothing to do with how many team records he holds.

I was scared when he left because I knew we didn't have anyone to take his place offensively on the team, but I really am starting to realise now everything that left when he did.