Try not to look so sad, chums 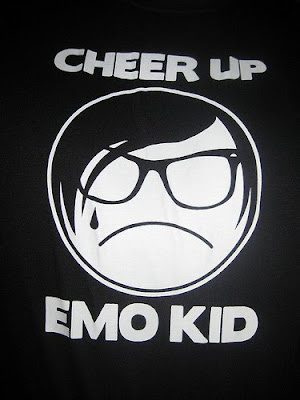 It's been quite a ride so far, hasn't it? The hot start through the nine weeks of the season helped to separate the true believers from the doubters, and the hopeless romantics from the incorrigible cynics.

Ah, the salad days: Homers were bountiful, and pitching performances were surprisingly satisfying. Brett Cecil got the call, and quickly emerged as the future (if not present) ace of the staff. Travis Snider was out of the lineup, but we hardly seemed to notice, given the performances of Fred Lewis and José Bautista. We'd even managed to relax about the whole thing with The Manager, even stepping in occasionally to (quietly) defend one of his moves. We looked at the standings daily, and saw the Jays sitting above the Red Sox, and mere percentage points behind the Yankees.

These were good days, and times to savour. We could hardly have been happier. We relaxed, smiled, and put on five more pounds.

But on the tenth week, it suddenly went ugly. There were shit-kickings, painfully close games that got away or never seemed far from our grasp. But all of it added up to a week with only a single narrow escape of a win. (And that win only added to our general anxiety about Kevin Gregg as our closer, leading people to start talking wistfully about the days of the Beej and Billy Koch. Or maybe that was just us...)

We've all been conditioned at this point to keep our eyes open and to anticipate the moment in the season where it all goes wrong for the Jays, and where they slip off the pace and back into the mid-pack (or lower) of the American League for good, so a week like this is certainly going to resonate. And while we're generally committed to be the last dude handcuffed to the ship's rail when it hits the ocean floor, we'll confess that there was much about this past week that causes us concern.

(Like JoBau's inability to hit inside pitches. Or the Jays' inability to get guys on and move them along. Or the spectacular ratfuck that is the fifth spot in the rotation. Or the prospect of meeting up with the Padres and the Cardinals.)

But if we can offer any solace in this, we'd tell it you like Ray Charles' momma told him: There's gonna be hard times. This past week sucked, but you've got to just pick up your replica retro Jays cap, dust it off, slap it back on your mellon and hope for a better week ahead.

This team has surprised us already, so let's try to hang onto those happy thoughts, even as they drift into memory. Because the alternative is a long miserable summer.
Posted by Tao of Stieb at 9:28 AM

some interesting numbers. Jays since playing Tampa at home have probably the toughest 37 game stretch in baseball. So far they're 4-8, and if they can go 14-11 to the all star break, that'll put them 18-19 in that stretch and 48-41 at the break. Follow that with 16 games against bottom feeders after the break, and this season isn't necessarily lost. Go 12-4 against those bottom feeders, and suddenly, the Jays are 60-45 heading into the Aug. 2, 2010 game against the Yankees. Season isn't lost just yet.

Good call on that, GCM. Still lots of room for the Jays to hang tough, and make hay against some weaker opponents.

Also, I've just realized a significant flaw with the blog lately: Too much big picture, not enough minutiae. Need to fix that shit.

Minutiae, then. Why are you so much higher on Cecil than Romero? Don't get me wrong, Cecil's been great, but Ricky's been (pretty much this whole season) in the top 10 of all starters in baseball in FIP, WAR and Swing-Str%, and has often been top 2 or 3. Ricky's having a monstrous season, and most other teams' blogs list him as our #1 (and Beyond the Boxscore, fwiw).

Cecil vs Romero! I have a post for tomorrow!

I really have to bring back the TweetBags. Because those were fun, informative, and was easier to write.

Speaking of Cecil vs. Romero, am I the only one thinking that Ricky might be getting a raw deal pitching immediately behind Cecil in the rotation? They're an awesome 2-3 punch but they're also pretty similar pitchers these days; for hitters, seeing Romero the day after seeing Cecil is almost like getting a 4th or 5th look at (almost) the same guy in a 2-day period.

Ty. You are not alone.

@Ty
Nope, not alone at all.

Don't see them going 14-11 there GCM. It would be fun if you were right though.