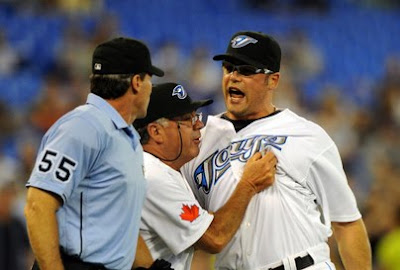 So...that's what Cubs fans were on about all season. Funny, because having been off the continent during Gregg's previous meltdown, we were still in the midst of our jarheaded love-in with the Jays closer.

So maybe that's why we're so eager to make excuses right about now. Like how it struck us that maybe home plate ump Angel Hernandez was making good to the Rays after refusing to call time to Carlos Pena and tossing Joe Maddon, and maybe his strike zone got a little cramped.

When we threw that notion out on Twitter following the game, intrepid reporter Ian at The Blue Jay Hunter undertook the task to get the Pitch FX data, and boy-howdee did he ever get the data. So if you'd like to pause for a moment and go read his most excellent analysis, have at 'er.

Not satisfied to wait until this morning, though, we actually got off our butt and looked up the pitches to Jaso, Zobrist and Navarro ourselves. On Gameday, which is admittedly totally unreliable, we found our suspicions confirmed. Conspiracy!

Then, this morning on Brooks Baseball, we found that the more reliable system seemed to confirm that Hernandez just made some very good close calls, although the fourth and fifth pitches to Zobrist were really close. And if it's a sunny Sunday Get-Away-Day, either Zobrist or Jaso is punched out and the Jays are high-fiving their way back to the clubhouse, another game closer to the peak of the AL East. Believe that.

The truth is that Gregg played a pretty dangerous game for a pitcher with men on base by trying to pick the corners throw pitches away from hitters. Gregg has some decent tailing motion on his fastball, and getting them in on the hitters hands or over the plate might have been rewarded with a ground ball or two, and a save/win.

For now, we hold our breath, and hope that this is more of a blip than a trend, and that Gregg heeds the words that Pappy Walton offered on his trip to the mound last night: "No problem."
Posted by Tao of Stieb at 10:01 AM

I swear to God this isn't Manager bashing - it really isn't intended to be - but even the most rubber-armed of closers needs a day off....even if a save situation presents itself.

Gregg was gassed and I question whether he really should have been "available"....never mind to throw 40 pitches or whateverthefuck he finished with. And once he was in, I don't see how he's in long enough to walk 5 batters.

Fuckin' Maddon's antics & his post-game comments, by the way.....hate that guy.

""The opportune moment can be disguised, or be wearing different clothing," Maddon said of the sudden turnaround. "Right there it was wearing the clothing of not permitting a timeout."

What in the name of Fuck does that even mean? We get it - you are folksy and wear funky glasses, but piss off with the nonsense.

Purcey walked too many guys in AAA for me to think he'd be an improvement as a closer. I think making him a hard-throwing LOOGY would be the best use of him--it minimizes the time he needs to keep focused.

I wouldn't mind Purcey as an Alan Embree type of power lefty, who pitches in late situations.

Scott Downs hasn't been right since his at bat last season, and would seem to be better suited to low-leverage situations for a while.

Over on DJF, one of their mouthbreathers decided Gregg was a pussy for not tossing the coach out of the way to really get physical with the ump. What an embarrassing legacy they have for masochistic fans to sift through. Milton Bradley wouldn't have let the coach hold him back!

Very disappointing loss, though. When Tallet left the game with a 5 run lead, I starting doing the Mr. Burns rationale: "OK, the bullpen will never give this up." "well, that's one run. No way they'll give up 4 more runs." "Alright, that's 3. Let's shut this down now, guys." And so on...

Next thing I know, I'm reaching for the Rolaids.

Wasn't Rommie closing in AAA when we called him up?

Gregg threw 88 total pitches in his last four appearances combined. Methinks he was a little gassed last night, and combined with the tight strike zone it was a recipe for disaster.

Just because it's a "save situation" doesn't dictate that Cito HAS to go to Gregg.

Camp gets the first two out on six pitches in the 8th, then Downs gets the final out of the 8th on 5 pitches.

I'm not sure why Cito didn't just leave Downs out there to get the four-out save, or even just to get the first out of the 9th and THEN bring in Gregg.

Cito has Gregg in his fantasy pool and he needs more saves.

or the Jays could "Kerry Wood" Dustin McGowan into closing if he comes back healthy. Honestly, with the exception of Brandon Morrow, there's no one on this team that has "closer" stuff on this team. They have some guys in AA that aren't ready yet.

This is manager bashing. Gregg is not good back-to-back, so he shouldn't have been in there in the first place. I know Cito wants to find out what his guys can do, but this one was obvious. As the inning went on, the bullpen should have been up faster.

Using Downs for one out was a waste.

My kids learned some new words last night. That was the most aggravating game in years (the last time any Jays game mattered this much was a while back).

I agree that Gregg should not have come in last night, he has proven to be very poor on back to back nights and I was almost certain the Jays would lose when Cito brought him in.

That being said, Gregg still deserves some of the blame. Whether or not those close pitches were strikes, it was my impression that the umpire had been calling that pitch a ball all night long. While other pitchers figured it out pretty quickly, Gregg kept going back to that exact spot hoping that maybe this time it would be called a strike.

I was a very frustrating game to watch.

Additionally, I had an interesting thought after the game. What if, and I'm not even sure what I think about this idea, the bullpen was run like a starting staff and set up as a rotation????

Is there a reason Downs wasn't kept in for a batter or two in the 9th? And what about Tallet? I know he was on a pitch count, but might it have been possible to let him finish off his inning? It upsets me that lost in all of this was Tallet's pretty good outing.

I know, I know... none of this changes the fact that Gregg's job is to close out games & he clearly shit the bed on this one. This really should have been a jays victory - completely Gregg's fault. But I can't help but wonder what might have happened if Tallet & Downs were kept in just a little longer...

This game was a walk in the park compared to tonight's.

Can anyone tell me what a stroke feels like?

More mismanaging by the manager.

I'm with Ack, Maddon and the Rays are reaching that spot under my skin normally reserved for New York and Boston.

Check out Wilner's blog. Him and The Manager got into a bit of a tiff.

Ha, Wilner wonders why Cito didn't like his line of questioning. It's because Wilner has one of those faces that everyone just wants to punch.

He can dish it out on his call in show, but he gets a bubble in his nose when someone else tells him to stfu.

Would it be a great moral victory for him to have Cito say, "You're right, Mikey, I should have made a different call. Kind of like when your dad didn't pull out."

HB - you might not like Wilner, but his questions to Cito were legit. Nobody in the T.O. media questions Cito on anything, so kudos to Wilner for that. Apparently Cito didn't like it, judging by his reaction....will make for an interesting subplot as the season progresses, at least...

Wilner's questions were perfect for the situation. Cito has certainly bungled the last two games.

I am not interested in defending Cito, but I definitely don't think he made a bad decision last night. The previous night, I would have pulled Gregg out, but I can also see how a man like Cito might want to go with some semblance of his 7-8-9 plan. Yeah, it blew up spectacularly and Wilner may have a fair question the first time he asked, but it's obvious that shithead just wanted to belabor the point.

It's not like he's asking Netanyahu about the Gaza blockade.

Oh well, I am "on record" as saying Wilner seems like a douche who, in my opinion, makes following the Jays less fun rather than more fun, but obviously Fan 590 disagrees and the Jays Talk callers keep coming back for more.

The hilarious thing is Wilner complains about being belittled by Cito. Isn't that what Wilner does to every other caller.

What a fucking joke he is.

I like your style, the fact that your site is a little bit different makes it so interesting, I get fed up of seeing same-old-same-old all of the time.

I found a great deal of helpful information above!