The Litsch is back 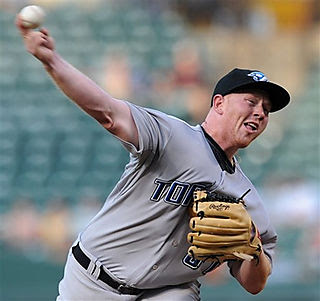 So all of our rotation issues are officially solved. Right?

Err...maybe. We suppose that would be a nice thought, and were we the type who could write off Litsch's 8.18 ERA and 34 hits in 22 innings over a four game stretch through the Pacific Coast League, we could start to think about how nice it is to have a solid fourth/fifth starter back in the rotation. Unfortunately, we're not able to convince ourselves that young Jesse's AAA beatings were completely the result of thin, dry air in deserts at altitudes.

(Although it would be really nice if we could, because then we could explain away the brutal ERAs being posted by Brad Mills, Ray Gonzalez, Marc Rzepczynski and most everyone in Las Vegas other than Zack Jackson and Bobby Ray. And even their averages in the high-3.00's aren't exactly the stats of which championship dreams are made.)

It could be that the Jays have decided to give Litsch the same treatment that Brian Tallet received when coming back from his injury: The courtesy of a couple of starts, with a decision on his rotation spot to follow. But where Tallet's lopey/gangly/junky/lefty stuff might make him a useful LOOGY or swingman in the suddenly porous an pitiable bullpen, Litsch's sub-90's fastball and crafty cutter might mean that he's a man without a role or a future in these parts if he can't prove himself to be useful from the start of his new beginning with the team.

It's not to say that we're rooting for Jesse to fail, because nothing would make us happier than to see him come in and post a sub-3.70 ERA by pounding the strike zone and mixing his pitches well. We're just not confidant that, post-surgery, he's going to be willing to toss his cutter more than 40% of the time, as he did when he was successful.

Moreover, we're not sure that now is the right time to move him into the rotation when the aforementioned Bobby Ray is pitching better (UPDATE: Oops...Bobby Ray is hurt, and hasn't pitched since mid-May) and Litsch seems to need more time to get his stuff correct.
Posted by Tao of Stieb at 1:14 PM

1. Bobby Ray is injured.
2. Litsch's cutter is sub 90, not his fastball.
E3. veryone said the same thing about Marcum pre season.
aye aye aye, no faith, I tell ya!

Okay, fine. I'm an idiot. But I still think they could call up Ray and see if they can winch his arm clear off his torso...just to help toughen him up.

Litsch's fastball averages 89-point-something. So it might get up over 90 here and there, but let's not assume that he could launch it past kids in the late innings.

He might end up doing okay, remember rehab starts are just that.. and a fat dude isn't going to fare well pitching in the desert.

I'd say that unless he blows the doors off, he's probably just keeping a seat warm for Drabek's Aug/Sept recall. Though I suppose Drabek's innings could come when Cecil/Marcum/Morrow are shutdown when they hit their Verducci IP limits.

Unless the Jays are in contention. Then Cito will pitch their goddamned arms off.

I think keeping Litsch away from eating options in Vegas is a wise organizational move.
I'm going to predict he'll be just fine one start, awful the next. Hopefully he can co-ordinate these starts with Morrow.

Actually, screw that, the ginger's going to be awesome!

By the way Tao, you should look up what you said in January 2009 about one Jose Bautista.
It will warm the cockles of your heart.

Why I'm reading a baseball blog from Jan 2009 when I should be productive at work, I have no idea.

Man, has everybody forgotten about the 2nd half of 2008 when Litsch came back from AAA throwing 93-94 with his fastball on a pretty consistent basis? He was also completely nails over that stretch, posting a 2.06 ERA over his last 9 starts of the season.

Given his AAA stats though, I'm gonna assume he can't do that anymore.

i'm so excited for a serviceable 5th starter that i'm going to overlook the 900th usage of 'the litsch is back' in a post about our portly ball-boy.

I enjoy you're blog,

but proposing to make someone a starter, who is injured makes you look weak..

But at least give me partial credit for knowing that Bobby Ray was doing okayish at some point this year.

I don't come here for injury reports. I come for the pie and black coffee.

Stop tweeting crap and start writing blogs. The Jays and Rays just finished a series and there hasn't been a word on this blog about it all week! Pathetic.

Time for Tao and Ack to fill the Jays blog void while the Drunks are absorbed by the World Cup of Homos.

What's the deal with Ack? Is he allowed to post whenever he wants or only when Tao let's him out of the basement on weekends?

the padlock comes off the basement door on weekends and during Tao's self-imposed exiles.

Believe me, that's all you need from me.