In defence of "fun" 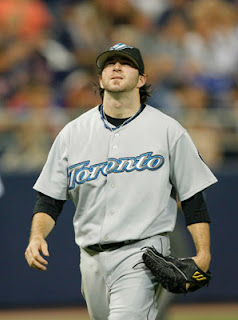 To be honest, I hadn't planned on a second post this weekend. But that's the thing about this blogging game: you never know when the mood will inspire. Part of what I (try to) do around these parts is react to the copious amounts of coverage around the team and provide my - opinion - when I disagree. Let's be perfectly clear on this - disagreement doesn't mean disrespect. Hell, I disagree with the Tao from time to time (cough Shawn Camp cough). Now allow me to get down to it before I earn my dismissal.....

The Sun's Bob Elliott and the Post's John Lott both penned familiar refrains in weekend columns concerning Roy Halladay and his legendary demeanor, work ethic, and preparation. More specifically, how those attributes allow Doc to mesh much better with his new team than old and how those attributes explain the difference in the recent successes of both franchises.

Lott, with help from Halladay, insinuates that it's the mental aspect of the game and unparalleled preparation of Chase Utley, Jimmy Rollins, and Ryan Howard that drives the success of the Phils.

“The part that surprised me the most is the preparation of the players — talking about Chase Utley, Ryan Howard, Jimmy, those guys — the time they put in, the attitude they go out and play with, that definitely surprised me."

It would be a fool's quest to argue that intense focus and preparation don't contribute to team and individual success. Hell, it's those very traits that led Jays fans to hold Halladay in such reverence. That, and the filthy, filthy stuff.

But do you know what I think led the Phillies to a World Series title? The talent of Chase Utley, Ryan Howard, and Jimmy Rollins. During Halladay's tenure as a Jay, never was there such a collection of stars up and down the lineup to support him. Hard work and pre-game prep undoubtedly played a role, but each of those players were anointed as up and coming stars before playing a major league game. It wasn't their work in the video room that earned those advance props. It was their talent level.

Point being, you need both to win. Talent and preparation. Halladay never had a roster full of both attributes during his time in Toronto. That's the real difference.

For his part, Elliott re-lives the now infamous pre-season quotes from some of the young Jays - in this case, Shaun Marcum - about how the clubhouse was to be a looser place, now free from the cold reign of King Halladay.

"In the spring, Shaun Marcum said with Roy Halladay gone the Jays clubhouse would be looser, the Jays would “have fun,” and Marcum would “talk to young guys.”

It was a shot at the departed Halladay’s intensity. People within the Jays organization have said the clubhouse was more relaxed once Halladay left with his all-too-serious attitude. "

That interpretation of the players message bothered me in the spring, and it bothers me now. Undoubtedly pressed with dozens of questions along the theme of "Whatever will you do without Roy?", I'd like to believe that Marcum was insinuating they would find their own way, and things would naturally have a different feel without baseball's best pitcher stoically leading the way. Call me a wild-eyed optimist, but I just did not read those comments as an indirect insult to the departed staff ace.

Further, and maybe I'm unfairly merging thoughts on both articles here, the insinuation seems to be that fun, loose baseball teams will never succeed against extremely focused, intense clubs. Perhaps (and even likely) the long season will flush out the argument further, but now seems like the wrong time to make such a point towards the 40-35 Jays, hanging tough in the monstrous AL East.....while the disappointing 39-33 Phillies find themselves in 3rd place in a weaker division. And hey, someone tell that to the young '03 Marlins roster, or '04's collection of Boston's self-proclaimed idiots.

Disappointingly, Elliott ends his column with a none-too-subtle throwaway:

A 5-1 Jays victory over the focused Phils, with Marcum throwing 6 strong innings? Yeah, I'd say that was fun.
Posted by The Ack at 12:45 AM

Good work again, Ack. I read that Bob Elliott piece and given how brief the quote is, it's clear the reader is being asked to draw the conclusion that Marcum is saying, "Ding dong, the witch is dead!"

He could have said, "It's tough to lose the best pitcher in the game, but we are going to stay loose and have fun. As an older member of the staff, I will be sure to talk to the young guys. I learned a lot from Roy and I will try to pass it on."

But that quote won't sell any papers or gin up the fan base, so you pare it down.

Elliott is the worst and he has really proven it this year. He's taken the mantle of the worst reporter covering the Jays and really run away with it.

No way in hell was Shaun taking a shot at Doc. As Darren pointed out, this quote was deliberately shortened and paraphrased by Elliott. I'm sure Marcum was trying to say something along the lines of "Doc was intense and helped out the young guys like me take that intensity out on the field, and now it's my turn to take that ace/leadership role, but a little differently. Having fun with it, too."

I wonder how high the Jays' payroll will be next season?

Do you have any interest in doing game threads? There is NO place on the Internet doing them for Blue Jays games any longer.

I miss Roy more than any other player we've had in recent years, but there's absolutely no question the current Jays are looser, less pressured, more cohesive than in previous years. For one thing, they don't have to worry about the endless Halladay questions, for another they're playing above expectations. But Halladay was a slightly gloomy, overly serious guy who learned his attitude from guys like Clemens and Morris -- neither of whom were clubhouse faves. In the off-season his idea of fun is fishing and church. Maybe Marcum is a good alternate kind of role model for a bunch of young kids who've come up together through the minors. Play the game hard, have fun, support your teammates, and maybe go out for a beer and a burger once in a while. That's different than showing up to work out an hour before anyone else. I think the small club of latin players also has something to do with it. Guys like A Gon and Bautista and Molina seem very into the game -- but they also have fun with each other. That's been a positive also.

A ballclub doesn't always have to be an Intensathon to be successful. Loose, talented teams are often the best teams.