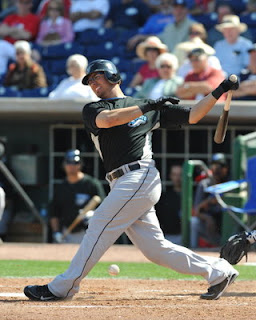 Heyo! Ack here, in case you'd forgotten. I know - try to temper your enthusiasm, but I'm hoping that absence does indeed make the heart grow fonder. What? I was only out of the loop for a week? One goddamned week? Well then...

It was during my nightly ritual of scouring MiLB boxscores for the Jays minor league affiliates that it dawned on me - in the midst of a slump (and a corresponding Overbay hot streak), perhaps we've been too quick to anoint Brett Wallace as the next foam-at-the-mouth prospect whose recall we eagerly await.

What about that guy Arencibia (or Aaron Cibia, for all you DJF hounds)? Remember him? The Player whose initials the Jays Talk crowd hold against him? OK, let's get serious for a moment here....

After a fairly miserable 2009 campaign (.728 OPS) and a slow start to 2010, Arencibia has apparently found his groove and currently sports a much improved .848 OPS to rock along with his 12 HR/33 RBI. Here's the part where you say "yeah, but those are inflated by Vegas". So what if I told you that his home/road OPS split was .731/.991? Then what? PCL inflated? Yeah/sure/maybe, but at some point, you have to stop discounting players because of the league they play in, no? I mean, whaddya want, a 1.0+ OPS? C'mon. Arencibia may never reach that coveted foam-at-the-mouth status (yeah, I know - I made that up), but he can certainly become a legit major leaguer.

JPA is in a pretty tough spot for a recall, all things considered. John Buck is handling the starting duties as well as any of us could have expected, and you can't recall a hitting-first catcher to be your once a week backup. Seems inevitable he'll see big-league at-bats before the season is through, though. And hey, with his relative aversion to taking a walk, he'll instantly be a favourite of hitting coach Murph. Heyo! (yeah, it's good to be back.)

Oh, and about Wallace....let's not allow his recent statistical nosedive and negative reviews (insider alert! But here's the money quote: "First-base prospects are expected to hit for average, draw walks and hit for power. Wallace is doing one of those things, but his power is a bit of a myth, and the walks are something that might not have ever been there in the first place.") talk us off the kid.

Because sometimes, it's about more than the numbers. It has to be. He's going to hit.

Brett Cecil is an Ace in the making (if he isn't already).....
You're damn right he is. Go ahead and convince me otherwise.

No, seriously. Why can't he be? Because he doesn't throw 95+? Get the hell outta here with that.

.....and Brandon Morrow could make for a fantastic #4
Speaking of throwing 95+, Morrow seems happy to harness his filth instead of just whipping max effort fastballs past major league hitters (though that's always fun, too). I'm telling you....if Papi Walton can smooth out his mechanics and Morrow settles into a consistent delivery....wow. Just, wow.

With all the talk of the upside in the arms within the system and those the Jays just drafted (Deck McGuire - now that's a baseball name), Morrow might trump them all.

Just another reason this is a fun team to watch and follow. And that's enough for me, anyway.
Posted by The Ack at 1:40 AM

An on-base percentage somewhere approaching league average would be a good start. Even the hacktastic Miguel Olivo had a .350 obp in the minors.

You know what, Peter? That's a great call re: Jeroloman. I'm certainly not disocunting him, but I just can't wrap my head around his offensive explosion this season. I still think of him (wrongly?) as a defence first catcher.

Which isn't a bad thing, even if that's all that comes to pass.

and, re: JPA's OBP....he is what he is, I guess. He'll have to hit for average to put together any sort of respectable OBP, because he isn't going to walk his way to one.

A quick glance at minorleaguesplits.com says that Jeroloman has gone from an extreme groundball hitter in years past, to an extreme flyball hitter this year. Seeing as that points to a legitimate change in talent, we should expect his future offensive output to be closer to this year's that to that of years' past.

Why can't the team bring them up (separately, or together) and see which one has the least trouble adjusting to the majors?

Oh, right. The team is contending.

I get that the team is playing better than expected and that management is under pressure to not mess with the current winning formula. But there will come a time when everyone involved will regret not giving Wallace/Arencibia/Jeroloman (and others, probably) some playing time in 2010.

Or is 2011 now the year when they play all the youngsters and see which of them has the right stuff?

Unfortunately, it is probably 2011 before any of the youngsters get some playing time because that is when there will be a manager other than Cito "gotta get my veterans a good contract" Gaston will no longer be at the helm. To bring any of them up now would be to bring them up to the bench to sit.

Hmmm, a bit of a grammatical misstep in all the excitement, but I think you know what I was trying to say.

Comparing Arencibia and Jeroloman makes no sense. Arencibia is a level ahead and one year younger.

Jeroloman had more walks in 382 plate appearances in 2007 than J.P. Arencibia has had in 1496 PA's over his entire minor league career.

Age and level become completely irrelevant when your plate approach is THAT bad.

Call them both up. And FUCK INTERLEAGUE PLAY.