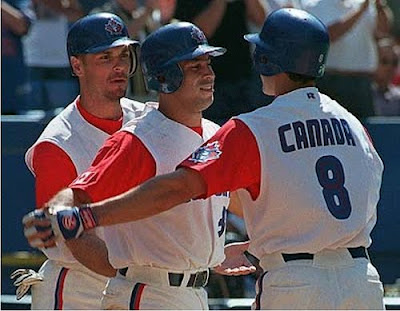 Where we realize that the Jays are not going to be at home over the Canada Day weekend.

(Mind you, they were at home last year, and there were plenty of photos of RickRo in his Canada Day duds to prove it. But we settled on the image above because of the gratuitous presence of Ed Sprague. We thought it proved our point.)

Okay, this is probably where we turn into a big sooky-baby spoiled kid in the mall parking lot, wailing at not being spoiled enough and blowing angry snot bubbles out of our nose. But is it too much for MLB to just do the Jays a solid and maybe let them play at home every July 1? The team is stuck in the perpetual Group of Death year after year, so the least you can do is give us one day to attract some extra proud Canadians down to the ballyard to hear some Trooper blasted over the loudspeakers and have some fireworks set off in the Dome.

We complain to avoid the real problems...
If Ricky Romero were to throw a perfect game, it could end up being one of those 10-hour long deals, because the Jays bats seem to go somnombulent when he is on the mound. Watching Aaron Hill whiff at Jake Westbrook's slider last night like he was channeling the Retro Handsome Alex Gonzalez made us wonder if the boys don't just breeze past the scouting reports when the good pitchers are on the mound.

When is a 4.50 ERA impressive?
It's impressive when you think that the pitcher still has a number somewhere in the mid 6.00's, until you realize that Brandon Morrow, tonight's starter against the Cleveland Racially- Insensitives, has given up a grand total of five earned runs in his last 34 innings of work, dropping his ERA down to respectability.

There's a part of us that wants to think that Morrow can become a younger, cheaper version of A.J. Burnett, with less douchebaggery and fewer excuses attached. Over the past month, Morrow's certainly been the far better pitcher of the two.
Posted by Tao of Stieb at 11:58 AM

Yeah, the schedule is pretty awful this year. G20 BS was one thing, but you'd think they could get the Jays home for Canada Day. They have Cleveland at home at the end of the month, so why not switch it? Flip mode!

I say this as someone whose scheduling experience is pretty much limited to, "I'll watch the Simpsons at 9:00, then play xbox for 30 minutes, and then watch True Blood at 10."

"The perpetual Group of Death ..." No shit, eh? It's hard enough playing in this God forsaken division, and having one helluva fucking interleague schedule, including three stolen home games, and on top of it all, we can't play at fucking home on Canada Day.

I need a cigarette.

We were away for the Victoria Day weekend as well, and then inexplicably playing in Toronto the week after on Memorial Day. It's somebody's JOB to make the schedule; I would think you'd actually have to go out of your way to mess it up that badly.

I think they had to be away because of the long set up for the U2 concert scheduled for July 3rd.

Of course, the concert's not even going ahead now.

I always knew you could blame it on Bono.

If anybody's looking for something positive to think about, let's take a look at J.P Arencibia's line in Vegas so far this year:

I actually had planned to see that show until it was canceled.

I've never seen U2 live and I really want to before either Bono or I die. Doing my level best to beat him to the grave.

Morrow already is a cheaper AJ-if he can keep
this up that is.

Somnombulant, that there is one of them big words...

Pretty sure the Jays have requested to be on the road for Canadian holidays, as TV viewership is down, and people tend to go out of town

I haven't liked U2 since Rattle & Hum. Does that make me a bad person?

FWIW, I'm pretty sure it's up to the clubs to make special scheduling requests. So it wouldn't surprise me if either the Jays didn't care, or they figured the CDN holidays wouldn't generate enough extra $$ to make it worth the effort.

Ah come on Ack, Achtung Baby was a great album! Now that Passengers "soundtrack" deserves to be mocked.

I've always thought, can you imagine the kind of crap that Bono would release if he went solo? Frank Black times ten I tell you (I'm aware that Mr. Black has done some great stuff, but does anyone need to put out this many records).

Ack, can you recommend a place to drink in the Peg on an upcoming Sunday and Monday night? Last time I think I went to the Toad.

Also, can I tempt anyone in the roto-league in a slightly damaged Tigers reliever?

Where you coming from & where are you staying?

If you've never been, you should probably consider the cliched Winnipeg Earls (on Main, preferably) experience. For the, uh, "atmosphere".

Haven't been in a while, but Kings Head Pub in the Exchange district used to be cool.

If Goldeyes in town, spend $10 on a ticket and drink beers at the ballpark. Highly recommended.

I don't even know what goes on at the Forks these days. Maybe patio at Muddy Waters or something.

There's a huge new sports bar opened up on Portage across from MTS Centre. Never been, though.

Really, I'm lame. My cool pass expired about four years ago. So apologies if none of the above work out for you....

Ah, Earl's on Main. How I miss it. Actually, I miss the service industry at large in Winnipeg. The worst culture shock I had to deal with when moving to oil country was the fact that everyone takes in stride the terrible service provided at restaurants and bars.

Thanks Ack, I'll drop you a line through the Tao. I'm moving from Edmonton to Ottawa and if I can make it out of Winnipeg without my car being stolen like last time, I'll be pleased. Staying in Armstrong Pt. area I think.

Service industry has improved slightly in Alberta, I knew a bartender who was fired for "being an asshole to customers". The couple trips to Fort Mac were awesome to witness customer service though.

Scrappy, I'll take your slightly damaged Tiger reliever for my seasoned Chase Utley. Ty, I feel for you in our DJF league, brother.

JPA had such a ridiculous month, that his 2/5 the other day LOWERED his numbers for the month. Time to boot Buck and bring the guy up. His eye isn't ever going to improve anyway.