This rotation is doing just fine without what's-his-name 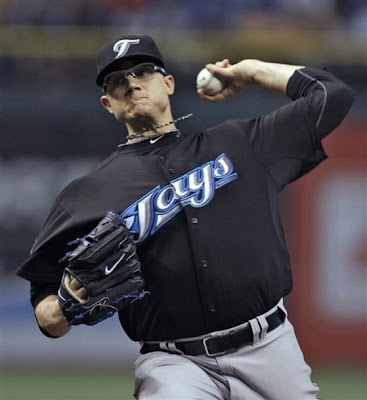 It's probably easy to forget this after the shit kicking that the Jays took in the first two games of the Rays series, but their rotation - or, at least 60% of it - has been something to behold thus far into the season. Take a gander through the league leaders, and you'll find three Jays starters in the top 20 of the ERA, WHIP and Ks.

Maybe this has crept up on some of you who were inclined to follow along with the notion that the absence of Roy Halladay was going to create a giant sucking vacuum in the rotation, and that the 100-loss season would certainly ensue because one-fifth of the starting corps was gone. "A bunch of guys named 'Who?'" is the laugh line that we seem to recall.

But last night's awesomely manly performance by Cecil brought us back to remembering how much we've enjoyed the pitching performances from the top three so far this year, with the occasional quality start from Morrow tossed in for good measure. The Jays numbers as a starting rotation sit in the middle in both the AL (6th of 14) and MLB (16th of 30) in terms of ERA, although with the improvement seen in Morrow, the expulsion of some of the lesser lights and reinforcements on the way (Litchtits!!!1), we're cautiously optimistic that the starting pitching can actually improve.

With a team that is sitting three and a half games back in the Wild Card chase in a season that was supposed to be lost before it got underway, we really hope people start to recognize how much great baseball our guys are playing, and how close this team is to making the next step.

(And yeah, we're a hopeless booster for this team. We wouldn't have poured all of these hours and all of the effort into this little ratfuck of a blog if we weren't hopelessly devoted to this team. If you want someone to be cynically aloof about the Jays in 2010 and in the future, there are an infinite number of options out there for you.)

Speaking of next steps...
It's the National League for the next two weeks, and we have a whole lot of stuff to say about the Rockies, Padres, Cards and whoever. But we'd rather leave The Ack something to talk about this weekend.
Posted by Tao of Stieb at 11:07 AM

The pitching has been nothing short of sublime, especially those three mentioned. All J.P. Ricciardi draft picks, might I add.

Ubaldo tonight. Momma. Interleague play has been a swift kick in the nuts in recent years; I look forward to our fortunes changing this years, as this team quietly continues its quest towards the Wild Card.

It is worth pointing out that, as result of the less than stellar defense played by those in black & blue, the Jays are much, much BETTER pitching team than this.

The starters rank 3rd in baseball by both FIP and xFIP, as a staff they're 7th in FIP. Even better than!!

Well said, Tao. This year has been a pleasant surprise. If they are 2-3 games from the Wild card in August and Sept, it will be astounding and wonderful.

Not sure if the haters are getting to you on some level, but don't let them. Most of us realize you have a full life outside of this blog (beautiful wife, new house, a job that actually pays the bills) and we are grateful to read your observations on an almost daily basis.

Seeing as my blog was last updated March 21, I am impressed with your consistency.

it's funny about the defence. I think they have the 3rd best fielding % in the league. Wonder why FIP and xFIP are so off compared to ERA. Could be a little bit of Eveland and Tallet in there, but not in FIP xFIP?
Also, Morrow gets more than "occasional" solid starts in there. 7 of his last 10 have been quality, and his last 3 against potent offences have been stellar.

Here is my concern when you (or anyone) say things like "...and how close this team is to making the next step."

A quick look through our roster shows alot of guys (Gonzalez, Bautista, E5, Buck, Molina.. etc.) that don't (or shouldn't) have any place on a team that looks to contend in the AL East.

Let's say all of those guy suddenly fall back to earth (or at least closer to career norms), we're back talking about a team that might scratch out 75 wins.

The fear that we're watching a spectacular flameout of guys playing way above their heads keeps me from shotuting "Playoffs!!!1" as loudly as I should.

Our rotation's future might look bright, but our lineup..... not so much.

If AA's drafting strategy is any indication, it seems like the Jays are going to build the rotation from the inside and, hopefully, get the proven hitters they need to contend through free agency.

The again, for every guy we have playing an outlier year, we have a couple studs who are slumping a bit. A Gon, Buck and EE can cool off as Hill and Lind heat up.

@GCM - fielding percentage is deeply flawed. You can't make an error on ball you can't reach. Or a ball the official scorer deems to be beyond "an ordinary effort." Errors are dumb.

Have I ever told you that you are the shit? Because that is awesome, how you saw my stats and raised me a FIP.

(And we should really get on that podcast. Check your email.)

LOL, just when you think Tao is going to nut up, he is publicly gobbling a guy from another also-ran Jays blog. Jeez dude, self-respect much?

I agree with Greg E - I think the Jays need another impact bat in order to stay in the race. Maybe Wallace can be that guy by displacing Overbay, or they get an upgrade somewhere else on the field. The Jays are seventh, but the Yankees, Red Sox and Rays are 1, 2 and 3 respectively.