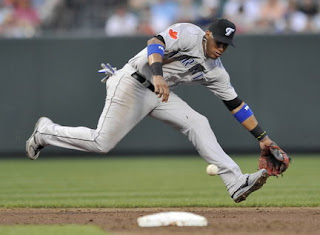 Chances are you've read articles and/or blog posts here there and everywhere concerning just who the key bounceback candidates are should the Jays expect to build - tangibly - upon the unexpected success of 2010.

Aaron Hill and Adam Lind - step right up. Or perhaps you feel it's the younger players - Travis Snider and JP Arencibia come to mind - that need to solidify their status as everyday players, or - fingers crossed - emerging stars.

We've also spilled gobs of digital ink discussing the rotation, which must "step up" now even more than before with the departure of "veteran" Shaun Marcum. Yes, Ricky Romero, Brandon Morrow, Brett Cecil, Kyle Drabek, and (insert #5 starter here) must indeed pitch like men for the club to emerge as legitimate contenders in the near future.

But one name is oft overlooked this offseason, and Yunel Escobar has as much potential to take his game - and the fortunes of the Blue Jays - to the next level as any player on the roster. While many fans were left wow-ed by Escobar's hot start and Fernandez-esque defensive wizardry (what?), the truth is that Escobar's overall contribution last season was.....underwhelming.

Ignoring his miserable pre-trade numbers - let's chalk it up to the Atlanta Braves culture of blatant racism (I kid! Kind of!) - Joo-nel still only managed a sub-.700 OPS with the Jays. I know, right? Take away the flair at short and the shared man-bro dugout handshakehugs with Jose Bautista, and that's what we were left with.

But there has to be more in him, doesn't there? There has to be. Twenty-eight years of age (and it seems like a legit 28, not a Cuban 28) seems far too young to be beginning the decline phase of his career. And despite notions of being a bad-body shortstop not prone to aging well, Escobar displays obvious athleticism and is no slug (yet).

In Escobar, the Jays have a shortstop who has drawn MVP votes in the very recent past. Should we expect a similar plateau going forward? No, probably not, unless we want to be completely unreasonable. But what is reasonable is a return to an .800 level OPS with Gold Glove calibre defense (if Ozzie Jeter and his magic glove will ever relinquish the crown) (that's sarcasm).

Plug that into the Jays 2011 everyday lineup and call it an "offseason" win. I'll take that every time.

Despite struggling offensively all year, he still put up a 2.2 WAR.

And you're right...after you get past the elite guys like Tulo and Hanley, Yunel Escobar could be just as good as any other SS in baseball next season. He doesn't really get mentioned enough.

I agree. Yunel could be a terrific shortstop, so his struggles in 2010 are puzzling to say the least.

Perhaps 2011 will be a brighter year for the shortstop.

And now he has a manager in John Farrell, along with the ever-positive Butter, to encourage and develop him. They all believe in Yunel and I'm betting it shows on the field this year!

I've been thinking about Yunel a lot this offseason as well.

Cripes, even if he posts a 4 WAR, that's a good chunk of production towards the top of the lineup.

Also and Yunel: Is it just me, or is he headed to 3B with that big stocky body of his?

Yunel to 3B could make a lot of sense longer-term, especially if Hechavarria has a good year. If Bautista's gone after this season (which seems likely), then a 2012 lineup with Escobar at 3B, Hech at SS, and Lawrie in one of the outfield corners might be kinda neat.

didn't the jays hire mr. fernadez as a personal fielding tutor for junel?

Yunel makes no sense at third. He's not a great on base threat and he hits for very little power. Most of his value is tied into his ability to play one of the best defensive SS's in the majors. You're better off trading him then putting him at third.

I think Yunel has a shot at being the top AL SS right now. Which probably says more about the lack of a good SS in the AL then anything else. I figure he puts out a 280/350/380 line with his plus plus defense. I'd be shocked if he wasn't a 3-4 WAR SS.

I remember reading a Braves blog that Yunel had groin/ligament injuries in early April, much like Hill. If he can improve conditioning and stay healthy, then we have hope.Of course it doesn't hurt that Fernandez was a conditioning freak and may rub off on our man.
I also wish we could just get rid of the turf in the dome, who knows how much of a factor it will be on the long term durability of the players, thinking of Alomar's knees and VW's hammy problems.

I was always surprised with Atlanta's willingness to trade him for minimal return the way they did. Could it be that they saw something that everyone else is missing? Just asking.

I left this comment already, but it didn't appear. Manny is coming to TO. Bank on it.

Yunel has a fatal flaw. He's neither goose nor gander. His build is that of a 25 to 30 homer power infielder - he was taught to slap the ball and run. He knows he's more than a slap and run guy but hasn't learned how to hit for power. At 28 - is he going to turn into a butterfly or stay a caterpillar? I say what we've seen is what we'll get.

I see him gone when Heck is ready - and Heck - most likely - won't hit much better than Johnny Mac.

Yunel as a strange inside out swing but he hits the high balls well. If he could max out with a 270 average and 18 homers i would be happy.....fifteen even I can see him coming back strong this year and I'm happy someone finally picked out of the need to improve lot.