The last days of the Sausage King's reign 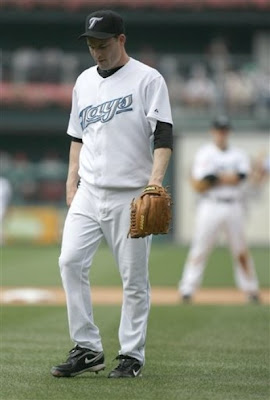 If you were following along on Twitter yesterday afternoon, you might have noticed us back-and-forthing with a few fine chaps on what the future holds for Jason Frasor in Toronto. But if you had better things to do, we'll bring you up to speed.

We think this is it for Jason Frasor in Toronto.

There. You're up to speed.

"But wait!" you say. "They offered him arbitration! Does that not mean that they had some interest in retaining Frasor's services?"

To which we respond: No. To us, it means that they wanted the draft picks that they could get for him, and that they took their chances on him accepting. Which he did, which meant that they had to go through the whole charade of negotiating with him up until the deadline.

"No! You're wrong! And you're stupid and ugly too! Jason Frasor will fosh the shit out of hitters once the Jays and Frasor bridge the tiny little gap between the $3.25 Million they offered and the $3.75 Million he requested! How can they not come together?"

We may be homely (joli-laid!), but momma didn't raise no dummies. If the Jays held firm on their offer and wouldn't split the difference on what seems to negotiable divide, then we're getting the sense that they wouldn't feel especially brokenhearted if Frasor were to take his deep, spittle-drenched late-inning exhalations somewhere else next year.

"Well, Frasor's probably going to win in the arbitration room, so we'll see him back anyways. So there!"

Sometimes, losing is winning. (Wait, did we just channel The Manager?) If the Jays lose, they can still release Frasor and owe his only a marginal severance. Or they look to trade him. Or they add him to the ever-growing list of right-handed arms populating their bullpen.

Or maybe they win, and they have a guy who they didn't especially want for $3.25 Million on their roster, which could happen. But what we have a hard time envisioning is them sticking with him through the season on the off-chance that he performs well enough to ensure them a draft pick in the 60's or 70's in 2012.

Besides: If dollar bills equate in any way to respect, it's worth noting that the Jays have given more of them to Jon Rauch and Octavio Dotel (Correction! Just Rauch...see comments) in the offseason than they were willing to offer to Frasor.
Posted by Tao of Stieb at 10:49 AM

On the flip side of that argument, if they're okay paying more than that for Dotel and Rauch then I'm sure they're okay with paying that much for Frasor, who can reasonably be expected to give them pretty much the exact same value as those other two guys.

Frasor is the new Accardo. Offering Frasor less money but not significantly less money than Dotel and Rauch seems like a move calculated to insult him. Clearly the Jays want Frasor (and possibly other players as well) to know that they don't appreciate losing out on draft picks. This is the ugly underside of "The Plan".

Dotel will make $3 million this season, so whether or not he makes more money than Frasor depends on how you look at it:

Tao, I think you're on to something here. I can't see why the Jays wouldn't want to just settle for an extra $500,000k unless they had plans to ship Frasor off before Opening Day. Is it really worth going over to arbitration over that little of a difference?

Nice catch Peter. I thought that Dotel was $3.5, but I didn't double check it. Bad on me.

The point here is not necessarily that I think that the Jays are going to walk away from the arb decision (and to be honest, I'm not even sure if they can).

I just think that everything points to the fact that they are done with Frasor, and that they don't necessarily want to go through 60 innings and $3 Million and more in salary to get that draft pick.

You are absolutely right that the Jays should look to move him. As an asset, I'm not sure what he brings, but yeah, they shouldn't just walk away.

I just don't think that they have any use for him any more.

Interesting spin Tao. I definitely see your reasoning. I'm actually going to add to it.

Do you feel that the Anthopoulos self imposed deadline could be a tactic by Alex to let other teams know what Frasor wants contract wise? So it's not a guessing game before hand?

Wouldn't it be safe to say that now teams can look at it and offer a prospect knowing very well that they can have Frasor's services for 2011 for 3.75 million, now that the reliever pool has dried out and teams are still looking for arms? Does this make Frasor the most sought after reliever on the market?

AA's game seems to be to use relievers as stop gaps until we have a bunch of David Purcey types, while turning the stop gaps into draft picks and holding together a decent bullpen.

This could be verified next year, if say, Shawn Camp were to accept arbitration as a type A FA and then the small difference would again be shown, opening the door for other teams to discuss a trade with the Blue Jays.

AA's goal doesn't seem to be to hold onto type A or B FA relievers, but to somehow either get picks or prospects from them.

It's not that Frasor isn't effective, it's more of can we get increased value for him in the form of prospects and draft picks.

I definitely think you're right on this one and this is Alex forcing other teams to come after Frasor. He's basically showing his hand and asking other players if they're willing to trade for one of his cards.

If this is the case, I love it. What a shrewd friggin' move!

I think a big part of where the Jays are going here is making use of the arbitration process rather than fearing it. It's there to be used, and you don't need to be afraid of it.

So this is what it is to be a Jays blogger. Are you sure you don't want to bring the Friday Rock Out back?

I think you bring up an interesting point, but I feel the only reason that they didn't meet on numbers wasn't because of the dollars, but because of the years. Frasor is probably looking for 2 or 3 years. They Jays probably offered him 1 year, and he turned it down.

I would expect that they try and negotiate a multi-year deal rather than settle arbitration. It will work out for both sides, as after this season Frasor will probably be a type A again (it averages 3 years) so they would back to be back to square one, Jays wanting the pick, and no team wanting to give one up for a reliever.

I had the EXACT same thought about Frasor. In fact, I wrote a post about it as well... Great minds?