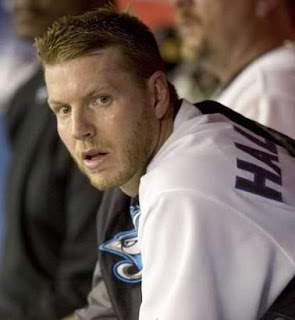 It's not that I think it's not going to hurt. I'm not delusional, 'fer chrissakes. We're still talking about Roy Halladay - the man, the myth, the Blue Jays legend.

It's just that I'm ready now. It's enough already. The whole thing has gone on long enough. Really, let's be honest with ourselves - we're all friends here, right? - does it really feel like Doc has been a part of the team, or at the very least, part of the team's future, since the trade debacle shitstorm that swept through the organization back in July?

Because to me, it feels like me we've just been counting down the days until it's over. With baseball's Winter Meetings looming right around the corner, I'm almost hoping, mercifully, that it comes to an end. It sucks for Doc, it sucks for the organization, and it fucking sucks for the fans. Not the most eloquent thing I've ever written, but hey - the Roy Halladay Sweepstakes haven't exactly been poetry in motion.

At this point, Halladay breaking camp with the Jays will be just about the most awkward situation possible. It's really not even an option, despite the protestations that "2 comp picks just might end up being the best package". So get it done. Put us all out of our misery.

I'm ready for it, anyway.

Lying liars and the lies they tell
"We wanted to trade Roy and Roy wanted to be traded (in the summer), as he does now."

This quote from venerable old JP Ricciardi is just a litttttle bit different than the July deadline stance of "Roy never asked to be traded, we're just seeing what's out there."

Hey, I know how the game is played, but it's still funny as all hell to read. At least JP left us with one of his legacy quotes:

"I personally think, move the player and move on because ultimately the player is going to leave."

"I know of two HUGE announcements coming at the Winter Meetings. I expect both will be bigger than any player signing or news made during. "

Carroll has already denied all of the obvious guesses from his followers - expansion, contraction, relocation, Selig news, etc. Any guesses?
Posted by The Ack at 12:37 AM

Otherwise:
- Divisional Series from 5 games to 7
- Re-alignment
- Balancing the schedule

Epic quote from J.P. That's why I love him.

Can't wait for the meetings.

My guess is the always exciting selling of teams. Rangers and Dodgers? I'm hoping the news is more palpable for fans, who you know, couldn't care less about teams being sold by quasi-billionaires.

Reason #1 Why Twitter is useless: Lance Armstrong uses it as a platform to chart his menstrual cycle.

I don't know if these would have CBA implications but how about an international draft or trading draft picks? Or perhaps a PED amnesty?

My definition of HUGE might be different than Mr. Carroll's. (insert penis joke here)

Re-alignment would be huge, but the rest of the guesses are underwhelming.

My assumption on this is more video replay and 7-game LDS.

Which, I suppose, counts as HUGE if you look at it the right way.

What I'm holding out hope for is a balanced schedule. Or exploding bases.

They talked about a 7 game LDS on PTI the other day, so that could be it. I guess that's huge in certain circles. I thought they were going to try to reduce the length of the season.

The Jays trading places with the Tigers in the AL Central would be HUGE!

WOW - I just commented over @ DJF regarding the Roy, and then I came over here to see yr post on the same subject. As you can see below, I am more than ready....


"It still seems kinda strange to me that 7 weeks of spring training away from home is enough to be a deal-breaker for a dedicated professional. If that's the case, sign with Tampa or the Marlins next year, and FUCK OFF ALREADY. I have become disillusioned with the Roy. Sure he gave everything to the Jays for many many years, but he's starting to sound like a giant pussy. "I'll veto any trade after spring training... I won't play on a team that isn't going to win the World Series... I won't train in Arizona... blah blah blah."

I think I'm the first to say it, and I'm going to repeat it..

Sorry for the copy & paste,
I don't expect it to be a popular opinion, but I just had to agree with the sentiment.

Carroll said it wasn't a 7-game LDS, so I guess that's out. He also said the announcements will be "big, not sure about surprising, tho very few "outside" people know."

I think "Fuck Off Roy!" is a little much, but that's me. But I will agree that the "I will only train in Florida" bullshit is, well, bullshit.

Yeah - can you imagine if the Cubs (for example) make a pitch for Roy with a great package that would make both teams happy, and he squashes it because they train in Arizona?

THAT would piss me off.

IBL Accepting Applications for Commissioner's Position - 11/27/2009
Toronto - The Intercounty Baseball League today announced that applications are being accepted for the League's Commissioner position.

Hi !.
might , perhaps curious to know how one can reach 2000 per day of income .
There is no need to invest much at first. You may commense to receive yields with as small sum of money as 20-100 dollars.

AimTrust is what you haven`t ever dreamt of such a chance to become rich
The firm incorporates an offshore structure with advanced asset management technologies in production and delivery of pipes for oil and gas.

Its head office is in Panama with affiliates around the world.
Do you want to become a happy investor?
That`s your choice That`s what you really need!

I`m happy and lucky, I started to take up real money with the help of this company,
and I invite you to do the same. If it gets down to select a correct partner utilizes your funds in a right way - that`s it!.
I earn US$2,000 per day, and my first deposit was 1 grand only!
It`s easy to get involved , just click this link http://avezyjyxi.builtfree.org/dybonom.html
and lucky you`re! Let`s take this option together to become rich

Roy Halladay has a no-trade clause. How he uses it, whether he doesn't like Arizona or he thinks stripes make him look fat, is up to him. At this point, I couldn't care less anymore about the Halladay non-news.

Hello !.
You re, I guess , perhaps very interested to know how one can reach 2000 per day of income .
There is no initial capital needed You may begin to get income with as small sum of money as 20-100 dollars.

AimTrust is what you need
AimTrust incorporates an offshore structure with advanced asset management technologies in production and delivery of pipes for oil and gas.

Its head office is in Panama with structures around the world.
Do you want to become an affluent person?
That`s your chance That`s what you desire!

I feel good, I started to take up real money with the help of this company,
and I invite you to do the same. It`s all about how to select a proper companion utilizes your savings in a right way - that`s the AimTrust!.
I earn US$2,000 per day, and what I started with was a funny sum of 500 bucks!
It`s easy to join , just click this link http://asonykyde.bigheadhosting.net/lijuhymi.html
and lucky you`re! Let`s take our chance together to get rid of nastiness of the life

You're, perhaps, interested to know if the Unicorn uprising in mid 2010 will affect the performance of your stock portfolio. Since the uprising will be fierce and bloody, if you are invested with such corporations that will provide the necessary weapons cache to help US and Canadian forces quash the uprising, owning stock in GM, John Deere, and Monsanto may be vital pieces to help your stock portfolio weather the horned-horse insurrection.

For more information on how to come out ahead, financially, in 2010, please click:

This better actually be "HUGE" and not a HUGE...moneygrab for rich teams.

I'm guessing we'll be disappointed with a 7 game LDS and a team sale or two. If it was anything else, we would've heard something about it by now.


Ok here's one of the big things to be announced Monday: http://bit.ly/6ICO3I I wouldnt want to be in the baseball stats business right now.

Exactly. Bigger than any other news made at the meetings my ass. "Well, maybe that Halladay guy was traded today... but who cares, let's get onto more important things: is motherfucking BLOOMBERG interested in baseball statistics now? Holy fucking shit, now THAT's news!

My point is made. This is 2009. If there was actually something coming out that's bigger than the deadline itself, we would've heard rumors about it from reputable sources. Like TMZ or something.

OK, ladies, we now know what Mr. Carroll's definition of huge is. Adjust your expectations accordingly.