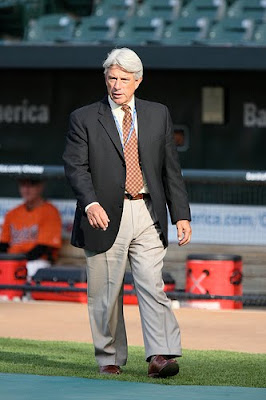 Imagine our surprise when we returned home from a night of work-sanctioned piss-tanking last evening, and opened up our email to find a press release from Sportsnet announcing the return of Buck Martinez.

We were so surprised to find our email on the Rogers media list (and also pretty hammered to boot) that we totally missed the fact that Buck is coming back to Toronto to serve as the play-by-play voice of the Jays. It barely computes this morning, to be honest with you. But really, what's the worst that could happen when Buck Martinez takes on a task in the game of baseball for which he has little previous experience?

(Oh, yeah. Right. I'd kinda blocked that year and a half out of my mind.)

It seems a little weird for Buck to be coming back, because from where we sit, there is no other market in the majors where his knowledge of the game would be questioned more than in Toronto. At the same time, it does seem from the initial reactions that we've heard that people seem pretty happy with this. Probably about as happy as they were when the team reached into the past to bring back the Manager. And look how well that's turned out!

(Seriously, I'm not this grumpy. I'm not! I'm just a little hung over and unable to look at the bright side of things, because the brightness burns my eyes and makes every throb in my lobes.)

This announcement also means the end of the Jamie Campbell era in the Jays booth. While some (most) around these parts found Campbell to be lacking (significantly), we hope that the kid lands on his feet. He seems like good people, and a genuine baseball fan, and we hope he finds something new and rewarding to do in the short term.

Taking a break
If we're a little scarce around these parts for the next week or so, it's because we're undertaking a move from our crappy little apartment into a house. These things don't always run smoothly (so I'm told), so forgive if we're not on top of stuff for a little while.

We've asked The Ack to take over for us, but he's not answering our emails these days. We think he may be plotting against us. But if he's not, he may be around should the Jays pull off any sort of deal or engage in further information gathering.
Posted by Tao of Stieb at 10:12 AM

I can hear a bit of Vin in Buck's tones. He might be better suited to play-by-play.

I'm guessing he'll have to leave XM for this one? I always enjoy him on Baseball This Morning.

Great post. That was Campbell's dream job. I'm with you; hopefully he lands on his feet.

Good luck with the move, mate. Positivity will reign upon your return.

I didn't mind Jamie Campbell, but I'm not fussy about announcers. He would have to be "boom goes the dynamite" bad for me to notice.

I do have fond memories of Buck with Dan Shulman, but he ain't walking through that door.

Congrats on the house, Tao, but I will miss you.

Communication breakdown! I answered your email a few days ago, boss. Perhaps there is a reverse plot in effect, whereby your server deletes me as spam.

(see what AA's cloak & dagger regime is doing to us all?)

Do you think if I call Alex Anthopoulos a shitload of times and ask him for a job, he'll agree? I mean, that's how he got his start. Then, perhaps, I can take care of this whole "The Manager" problem myself...

AA will hire you, however, there will be a downside:

1. You will not be paid
2. You will no longer be able to comment on anything on these blogs that is not approved first.
3. Your working hours will be Monday-Sunday 5am to 11pm

Other than that it will be a great experience.

As for Buck, I'm okay with it, but would have been ecstatic if Shulman was coming back.

Peter, I just want 15 minutes alone in a room with THE CITO.

I'm also thinking about coming into work late on Monday. Why? Because Vernon Wells is signing autographs from 12-1 at Fairview Mall. I've got an "I Believe In Vernon Wells" sign that could really use his autograph. He needs to know that it's only the kids that care. There's a grown man who believes in him, too.

Shouldn't Vernon be in Texas and not freezing his hamstrings for the winter in Toronto?

I'm somewhat indifferent about Buck back. It would've been something if Shulman came with him because he was the real star of that duo.

I think Campbell could do real well elsewhere. He never really got the baseball thing down, but I always like him when he does a Prime Time segment for example. He seems like a pretty likable guy, and maybe if they had put someone next to him who isn't an imbecile we'd be mourning his departure (maybe). I think he may surprise some people at how he does at the Olympics.

And don't tell Vernon about the "Vernon Wells Hatred Advisory System" either!

Tao, I also received that press release ... makes me wonder how they got my email in the first place, but maybe they just mass emailed anyone and everyone.

Will do. I think must be done.

"Thanks for autographing my sign, Mr. Wells. The Tao of Stieb says hello, and that stuff you heard about a 'Vernon Wells Hatred Advisory System'? Pure propaganda. Fuck a UZR rating. You're still my centre fielder. And good work leading the mutiny against 'The Manager.' Us real, die-hard Jays fans, we all hate 'The Manager.' One more thing: PLAYOFFS!!!1"

I agree with Colin. I hate Campbell as a play-by-play guy, but I always feel some guilt about it because he seems like a geniunely good guy. I think he'd do really well behind the mike on PTS.

So it occurs to me, while we're bringing people back, that Carlos Delgado is only 27 HRs from 500. Ad we're allegedly trading Overbay. And we have a couple of untested righthanded firstbasemen/dh types (Ruiz/Dopirak) who could use a platoon partner.

eyebleaf, ever the optimist. Buck is a character, i'll give him that. I wonder if he'll needle JP mercilessly on the broadcasts. and about Campbell, FUCK 'IM! Nice guys finish last, he was a middling announcer.


Vernon knows that people hate him. NO amount of spin will change that. I wonder if my boy Buck will rip him a new asshole on a consistent basis. As king of the Vernon Wells For a Bag of Balls committee, I dread the next 5 years. The team will be dreadful for the next two years, the Orioles will be getting better especially with Milwood aboard, Tampa making moves and the Jays are rebuilding. They will be rebuilding with that 20 milion dollar albatross around their neck too! Meanwhile, the Os will pass them ,the Rays will be on the decline and fuckhead Vernon is still here. Terrible...as much as I want to rip JP for that,it was Godfrey's wretchedness that saddled the Jays with Wells.

Bruno, a little love for Vernon Wells will go a long way. Open your heart. Let him in, man.

Eyebeleaf, where did you hear/see about Wells at Fairview? I know he is at Jays Shop from 3-4PM...