The dumbest thing Bob Elliot has written (this week) 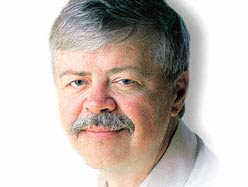 We must somehow be immune to the charms of longtime Toronto Sun scribbler Bob Elliot.

We'll hear people wax rhapsodic about him and his skills, and how he's sure to eventually win the Spink Award and gain entrance into the Hall of Fame, and we were left at a loss. We heard people talk about what a fantastic read his A Northern Game was, but we struggled to make it much more than halfway through, literally falling asleep almost every time that we endeavoured to dust off a chapter.

(Really, after one or two chapters, a book emphasizing just how goshdarned friggin' Canadian these Canadian baseballers are loses it's appeal for those of us who don't particularly care about the provenance of our favourite athletes.)

We'll confess that there may be a chance that he is a better reporter than writer (not a bad thing at all), although we often wonder about his comic overuse of the "Anonymous NL Scout". (This is especially the case since this unknown baseball birddog seemed to be trotted out whenever Elliot needed a blunt object with which to bludgeon the former administration.)

Whatever the reason that we don't seem to get Elliot's work, we generally don't see him come up with anything particularly awful either, so maybe his worst crime is that he is bland. Hard to believe, we know, considering the electrically vibrant personality that he puts forth on his appearances on Prime Time Sports.

But in Sunday's Sun, Elliot offered up an absolute howler on the significance of Roy Halladay's departure. And if you'll permit us our moment with the Fire Joe Morgan meme, we'd like to share this bit of work with you.

Plenty of calls, e-mails and texts received in busy week.

Nice to know you're keeping busy. What with the biggest trade of the decade for the Jays going down this week. Hopefully, all that contact with your fellow humans didn't cost you too many naps.

One friend's message was short: "Andrea Bocelli is gone. So am I."

Andrea Bocelli is dead? And you're friend is going to commit suicide out of grief?

My friend is not a ball fan.

He appreciates excellence. Over the years he has paid to hear Colin Powell speak, although he disagrees with his politics; watched Mikhail Baryshnikov while disliking ballet, heard Bocelli sing, although he does not like opera and watched Roy Halladay pitch.

Okay, I see where you're going with this. You're trying to say that your friend appreciates only the finest things in life, and Roy Halladay is one of those fine things. And this is supposed to mean something profound to me, although all I can think when I read this is "Andrea Bocelli was not so much a singer as a hoary hollering novelty act, and he really sucked, and now he's dead. So maybe I should show some respect."

(Wait! Hold the phone! A quick Google search tells me that Bocelli is alive. So Elliot's friend is clearly full of shit. If only he'd realized it before he went and hung himself in the shower.)

He would only go to the Rogers Centre to see Halladay face the New York Yankees or the Boston Red Sox.

Okay, let's stop the charade right here. Elliot is trying to use this expression of disinterest in the Blue Jays as bad omen, and an example of how people are going to abandon this team because of the loss of one key player.

Except that the truth is that Elliot's friend is not some sort of connoisseur, but rather, he is a dilettante, a tourist and an interloper who is only interested in his own self-aggrandizement through his broad demonstrations of his aestheticism. And if that fey bastard doesn't want to come watch the Jays next year, then that's just fine by me.
Posted by Tao of Stieb at 12:35 PM

I love the Bocelli carving. Elliott is guilty of that BS all the time - that is, saying "Bocelli is dead" and expecting us to know what the fuck he is talking about.

I am convinced that Bob Elliot only has a job because he came with the furniture when the Toronto Sun moved into their current building.

I have no idea who Bob Elliott's friend is (of course), but I love the way you skewered him. It felt good. Real good!

If the only two opera singers you can name are Bocelli and Sara Brightman, you might not want to blow your horn too hard at your next wine and cheese.

Oh, and feel free to keep using the FJM meme. It scratches me right where I itch and those guys ain't coming back.

Tao, you forgot that Elliot is also guilty of pure factual error:

"The Jays had scouts Roy Smith and Gary Rajsich in Houston to watch Cuban left-hander Aroldis Chapman this week. Chapman defected when the world juniors were in Edmonton in 2008."

Bob also went on bitching about how the Jays don't draft Canadians on PTS a couple of weeks back. And then grunted something about "Or they draft them but don't sign them."

And I yelled at my iPod "What do you call Trystan Magnusson, motherfucker?"

But moreover, who cares? This whole thing about how Canadian stars are going to bring out fans is such horseshit.

Honestly, Jason Bay and Justin Morneau grew up farther away from Toronto than somebody who was born in fucking Florida. Yeah, they sang the same national anthem as I did at school every morning, but who gives a shit?

You are totally getting blocked from Bobby's twitter feed now.

You know, I'd be a little disappointed if he didn't block me.

I don't give a shit where the players are from, as long as they have the ability to play the game of baseball. It's not like getting a bunch of Canadians is going to be some sort of magical elixir for what ails the Jays. That elixir is winning and the way to do that is to build the system back up with Americans, Latin Americans, Canadians, Asians, hell even Europeans and Aussies if they're worthy. Christ, How do Griffin, Perkins (he just took a severance package: 1 down 2 to go), and this bozo still have jobs? Ugh.

The attendance of Roy Halladay's final appearance in a Jays Uniform at the Rogers Centre was 20,668.

"According to two people familiar with the process, one of the Amaro-led brainstorming sessions produced an idea that might have allowed him to keep Drabek: Maybe the Phils could flip Aumont and Gillies to Toronto, because both were Canadian. In addition to their status as strong prospects, the two players could provide a public-relations boost to the Blue Jays on the day they lost their best player.

Anthopoulos, though, valued baseball skills over nationality. And while he liked the Seattle players, he preferred Drabek. "If a player is talented and happens to be Canadian, that's a bonus for us," he said. "But would we ever acquire someone because he is Canadian? No.""

And Tao, this was brilliant.

I guess it was wrong of me to assume that a grey moustache meant automatic connoisseur status and cultural education. You tricked me, Bob.

The next time someone suggests that the Blue Jays have leeway with a free agent because they are Canadian, I'm going to lose it.

Elliot, Griffin, McCowen, the late Marsden and Hunt are all like the uncles we all have had

They have their opinions, they are usually old-school, off-base and patently wrong but we have been listening to these opinions as long as we can remember. They aren't changing their views, nor will they acknowledge or accept the contemporary leneses in which we view today's game

Enjoy these guys for what they are and while they are still around.
The torch will be passed as it always does.

We are seeing the new wave; Blair, Freidman, Schulman, Brunt, KLaw, Kenny Ken Ken and just as important the blogosphere...yes Tao, The Ack and DJF, Mop Up Duty, Dug Out Central, you are all part of the next wave of baseball opinion and analysis. Keep it up...but...respect those who came before you.

Sorry you too, Hunter. No disrespecting

My mistake Peter D. I had his second last start at the cable box in my head. That night 11,159 watched Doc go the distance (yawn) in a 4-1 loss against the Twins to Carl fucking Pavano. Ugh.

Ari, thanks for the reference to that article. Awesome. Not only is AA not catering to fucking retards like Elliott, Griffin etc, he's also not catering to the "fans" who like to parrot Elliott's good friend Donald S. Cherry and talk about getting some "good ole Canadian boys". Fucking retard hockey fans fawning over a team that hasn't done a God damn thing in decades, but unless the Blue Jays are in 1st place they "suck". Fuck off and fuck hockey. I used to love hockey, but thanks to sports highlight shows that are 97.5% hockey regardless of the time of year, I have come to loathe it.

The writing does suck, but he was the first to say that Phillipe Aumont was NOT going to the Jays, and that we were getting Drabek, so obviously he does have some sources...

The dude will never let the draft pick signing issue of last year die, and loves to bring it up as a jab to Anthopoulos like he was running the show. Get over it, crotchety old curmudgeon.

Look, Bob Elliot is not very handsome at all. I ignore schlemiels like him, and so does Alex. we are focussed on one thing: a highly successful franchise (the possibility of which rests on winning, of course).

Trust me, these hacks will change their respective tunes when the appetite of the "average fan" jumps back on the bandwagon of taste I am creating.

And by the way, I enjoy Bocelli, but only through my 14-year-old daughter's closed bedroom door.

we need to bring back the glory days when the dome was the dome and fans came out in droves to watch canuck paul quantrill work his magic outta the bullpen. those fans were there for him, nothing to do with the then recent WS victories.....

by the way i enjoy con te patiro (Bocelli), its beautiful music not "howling" c'mon

So this is going to sound a little odd...

Does anyone know where I could get an Expos mini-bat? Like the kind you buy at the stadium? When I was doing my crazy baseball road trip, these bats were my souvenirs. I just found my stash where I had packed them all away, got all excited to display them in the basement, then realized I'm missing the Expos and the Indians. Running up to Cleveland to get another isn't an issue, but I heard that getting an Expos ticket has become pretty difficult these days.

Anybody have any suggestions? There's a cheap looking one on Ebay that the guy wants like $20 for, but for that much, I'd want one with some color (colour if you will.)

Any help would be appreciated.

fey bastard...bravo. I only know of one other person who has used the word "fey" in the last 100 years and he (me) is a genius. You're in good company.