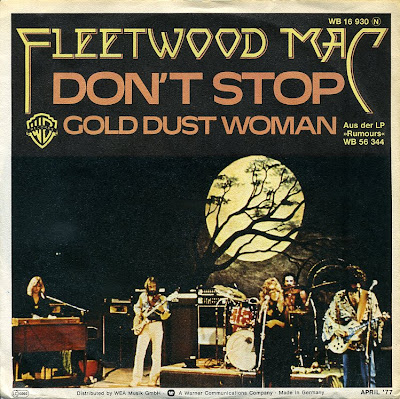 (And right about now, there's a handful of you who have a Fleetwood Mac aversion and raw open wounds from the Roy Halladay presser in Philly yesterday who have just flipped out and thrown their computer out the window. Sorry about that.)

It was unquestionably sad to see Halladay in another team's uniform, smiling and shaking hands and speaking warmly of the coming opportunity and floating out empty platitudes about his time in Toronto. It was sad to hear someone float out a new nickname for him overnight: Dr. Phil. (Yikes!) But frankly, we're thrilled that this whole thing is over, and we can move on. Keep on movin'. Let's push things forward.

We're not saying that we're glad to see Halladay gone, but from where we're sitting, this is the most exciting moment that we've had as a Jays fan in a few years. Maybe it is the excitement that you feel when you're about to go through a set of Level 5 rapids in a white water expedition with a bunch of weak-armed bureaucrats, and maybe you know that there's a good chance that this ship hits the chute at the wrong angle and you're going over and you're going under for an undetermined amount of time. But fuck it...Let's do this. Let's go.

Let's not look back, and figure out the multitude of ways that this is the fault of J.P., or Paul Godfrey or Paul Beeston or The Manager or whateverthefuck. Let's look at these three guys we got, who instantly move into the Jays' Top Ten prospects list, and let's get ready for what their emergence as significant contributors could mean.

And we don't want to indulge in propect pornography, but the one thing that we'll say about the three guys that the Jays received in return is that they've all had the opportunity to play for a year or two or three in affiliated ball, and there is at least a better understanding of how their skills will transfer to the pro game, as opposed to some pie in the sky supplemental round pick that the Jays were going to get after Halladay left. Whatever the case, we're pretty geeked to have these three new guys.

Over the years, we've seen Jimmy Key go to the Yankees, and Dave Stieb go to the White Sox, and George Bell go to the Cubs, and Roberto Alomar go to the Orioles. We saw Carlos Delgado walk away to Florida, then go to the Mets. We've seen Tom Henke move on to the Cardinals (err, oops...I meant Rangers), and we've seen Tony Fernandez leave and return and leave and return more often than we can count.

The point is that the team persists. Our fandom and our dedication to the Jays persist. Our desire to see the team succeed persists.

This is not the end. This is a new beginning. This is the start of a new journey. This is a moment to savour.
Posted by Tao of Stieb at 9:34 AM

Surprisingly, after watching clips of the Doc/Phillies presser, I slept well last night. It's over now. And hey, the season ahead will undoubtedly be frustrating, but it'll be a different kind of frustration. Growing pains in place of treading stagnant waters.

Also, and this goes against what I said pre-deal....there is some intrinsic value to having Doc go to the NL vs the fucking Yankees or Red Sox. Now that the possibility no longer exists, I can admit it would have ripped my guts out to see him pitch in pinstripes, goofing around with AJ, Melky & the boys...or red stockings, swaying to Sweet Caroline during the 7th inning stretch. How fucking gross would that have been?

Looking forward to seeing these guys come up together, and combine with the young pitching. The future looks pretty bright, at least brighter than a week ago.

In the end, we're all cheering for the Jays. The laundry, so to speak. We've felt loss before, and we will again. That's the beauty of baseball... how much it mirrors life. Any pain you feel now will be dulled by the coming of spring and the optimism of youth and new beginnigs.

It could have been a lot worse.


Now I look forward to watching the good Doctor mow down the Yankees in the world series next year.

Doc in Philly is something that I think we can all handle. Seeing him come to town a couple of times every year and wipe the floor with the Jays would have been tough to take.

I'd actually look forward to Doc's return to Toronto with the Phillies. I think he'll get an unbelievable ovation. And he deserves it.

All jokes aside, I think there's a pretty good argument that Halladay is the GBOAT.

Possibly the most sensible thing written about this whole ordeal. When Wallace becomes the next Fred McGriff we'll have a new favorite Jay.

From Philly Inquirer, Halladay's wife Brandy on Doc taking Lee's 34: "That should have been ours in July."

Brandy Halladay can go and fuck right off.

@ The Ack: I look forward to Doc beating the Red Sox or Yankees to win the World Series. He did it for years in Toronto. Now he'll do it on the grandest of stages. I can't wait to watch that shit. Playoffs!!!1 (For the Phillies!!1)

Yeah, Brandy was a bit of an evil kitty on that one, wasn't she? I thought that was pretty brassy of her.

These athletes wives should be seen and not heard, amirite boys?

Her tears that summer day in the press box in Toronto. All lies!!!!1 Doc's got my heart, but I'm finished with Brandy. Doc and his family don't need to endear themselves to the Philly Phaithful in the God damn papers. Philadelphia knows they just got the best pitcher in baseball. I really didn't need to read that shit. Silly Brandy.

Doc is dead to me now, he is the enemy.

That is unless of course I draft him in my fantasy league :)

That was brassy of Brandy, wasn't it. I'm sure it's hard to say all the right things at one of those deals, but still....makes you wonder a little.

I think it was more a shot at JP Riccardi's ineptitude than a shot at the organization and the fans.

At least, I'll live in denial and convince myself of that.

They both did a lot for the team and the city through their charitable work, so I'm (personally) willing to let one slide. I don't think that any harm was meant by it.

You're a better man than I, Scott, and you make good points.

If you read the release when Doc signed his last extension, he loved being here, and he loved the moves J.P. made. Signing Wells, signing BJ and AJ. Acquiring Glaus and Overbay. Even the Thomas signing. I don't understand why Brandy would be trying to single out Ricciardi. I believe it's flat-out wrong to say that the Jays did not try to build a winner around Halladay. They did. It just didn't work. Couple the attempt with the AL East going absolutely ape-shit at the same time, and it's not surprising that it didn't work out. But try they did. And until Doc himself comes out and speaks ill of Ricciardi, which he didn't even after JP was let go, I believe Doc believes the same; JP tried his best. It just didn't work.

I suspect Brandi's motivation behind her saying what she did had more to do with the media circus that began in the summer. That had to be a stressful time for the Halladays

Yeah, real stressful. They must have been wiping their tears every night with crisp $100 bills.

Oh yeah. Mucked that up. He finished in St. Lou, but went to the Rangers. Oops.

It's hard to be a Blue Jays fan. I'm not sure this move will get the Jays out of the dreary, constant, soul stealing, mediocrity they have become, but just like every year, I'm hopeful. And I'll watch, even when I don't want to, I watch, and I hope.

Who's next out of town? If he doesn't start to rake, I'm not sure I can stomach another season of Wells and his Zen-like acceptance of the steamy overpaid poop pile he has matured in to.

Well kudos to you nonetheless. I have no recollection of him in StL.

Holy shit! he was awesome in St. Louis!! Why did he retire?!

I blame this lapse in baseball memory on the strike.

Tom Henke reeked of awesomeness. Or was that Aqua Velva?

Nice to see a discussion of my first favorite Jay. I used to get giddy when he came into the game. Terminator has to be one of the best closer nicknames ever. I like Hammer of God a lot too.

I let Brandy away with it, would appreciate a thank god it wasn't the Yankees or Red Soxs though.

Think Downs will be the next to go, followed by Accardo and Tallet. Not sure about Overbay, if Wallace is the first baseman of the future is he ready? if not who plays first? It doesn't make sense to stick Lind there and find a new DH for a year does it? Overbay may end up being the cheapest option.

bullshitter, Roy Halladay is not.

Some rock out primers on this reflective occasion...


A story of unrequited love...


and this one first hit home at Sweetness's memorial......

Life is the journey - death is the destination - remember that next time you're thinkin' you won't follow the Jays now that the King has left the house. Now lets see Kyle pitch a no-no and Brett win it in the ninth with a Grand Slam. Go Jays!

Is it April yet?

thanksroy.com is now up to 13 pages of comments