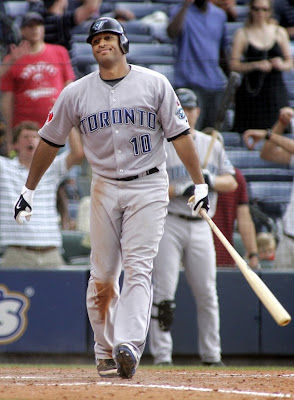 Our shtick around these parts has traditionally been to be the eternal optimist, talking people back off the ledge and putting the various dips and dives of outrageous fortune into some sort of rational light or perspective.

Somehow, we're just not feeling up to that task right now.

Maybe it's the mounting frustration at the fact that Cito Gaston has decided to chisel his lineup card into a granite tablet, thus ensuring that the tender feelings of the heart of the Jays' batting order are nurtured while they collectively suck the life out of the team's offense night in and night out.

Over the past six losses, Alex Rios, Vernon Wells and Adam Lind have combined for a grand total of ZERO runs batted in amongst them. ZERO. In 78 plate appearances. That shit just ain't funny.

And we understand that the past week represents a small sample size, but it's not as though this is a trend that appeared out of nowhere. Wells, your putative cleanup hitter for life, hasn't driven in a run since May 6 while Lind has posted a .645 OPS in the month of May. And while Rios has started to turn on the offense over the past month, his .786 OPS, four homers and nine RsBI are hardly enough to carry an offense on his own.

(As a side note to Vernon Wells: If you foul four pitches in one at bat off your foot and leg, do you suppose that you might want to stop chopping downwards on every slider and breaking ball that is thrown up there?)

We're not saying that this team needs a shake up just for the sake of shaking things up. But in the midst of an atrocious six game slide, we're finding it increasingly difficult to put our faith in the wise and sage Gaston's "Lose One, Win Two" philosophy. Do anybody really think that out of the charred remains of the past week, Cito's magical stubborn stoicism will earn us twelve wins?
Posted by Tao of Stieb at 8:54 AM

One reason I was not excited about Cito's return is exactly this: he's not a great improviser. He's good at making stars feel safe, but he's not great at reacting when a something out of the pattern shows up.

It is funny when they team hits a power drought though considering Cito's past as a hitting coach. I would think he would be able to start helping Vernon out of his impatience/desperation at the place.

I'm not saying Cito's to blame, or he's at fault, far from it. But sometimes, as much as you'd like to be Tony LaRussa, there are times you have to be Ozzie Guillen.

Come on Cito, just mix up the starting lineup for ONE GAME! Move Rios and Wells up into the 2 & 3 spot, and move Hill down to the cleanup spot. It can't hurt to try it for one game, right?

Or move Hill to third, Lind (in spite of his troubles) to cleanup, Wells fifth and Rios second.

Or look at the hot hand...Whatever.

Did it really make that much sense for Bautista to be hitting ahead of Overbay yesterday?

I believe Cito's magical stubborn stoicism will earn us 12 wins.

With the same lineup.

I believe in Wells and Rios.

Every team is going to go through a stretch where they can't hit with runners in scoring position.

Every team will not go through a stretch where their cleanup hitter doesn't drive in a run in weeks, but, hey, Vernon's our cleanup hitter for better or worse these days. So, faith.

I don't know Tao. I want to believe in the line up as is, but I watched some of the Sunday night game and seeing Mauer and Morneau made me feel ill. Maybe it's time to pick them out of a hat.

The men who fell to earth...

Here's hoping the Jays get it going again. The world seems a little sweeter when your team is doing well.

(yeah, I have nothing useful to add)

I like the out of a hat idea that Voodoo Matt mentioned. If I remember, it enabled Billy Martin to win the second game of a double header (can't remember the full math on if that was as valid or not, and my Baseball Prospectus book is at home).

Wells has always been streaky, and I might be wrong but never draws too many walks (when he swings at everything...). He makes sense lower in the order, hoping that he can sac some other guys with higher OBP.

We're sure that Vernon is not going to be awful all year long, but for the sake of comparison, here's what a few other cleanup hitters have done since Vernon's last run batted in on May 6:

Those six players are the cleanup hitters on the six last place teams across MLB. And their production dwarfs the ZERO runs that Vernon has driven in over the past two and a half weeks.

And this isn't a rant about his contract or anything of the sort...it's just stating our opinion - long held - that Wells should probably be hitting further down the lineup. And Cito's a fool if he can't see that.

Wow, Adam Dunn is doing very well for a guy who's playing a game he doesn't like.

That dead horse can still be beaten, right?

@ Valentino Right on with Wells lower in the order. There is no reason to have him so up in the order when he is so terrible. @ DP, you always have something useful to add! @ Those who don't doubt Gaston. If this losing streak continues AND the lineup doesn't get going what then? When a team hasn't won a championship or hasn't made the playoffs in 15 years, no one is untouchable in terms of batting order. Wells is not Big Papi, he didn't bring his team to the playoffs every year and bring another World Series to the Jays. Same with Rios, he doesn't deserve his spot either,so change it. Anyway, Cito has to realize that this is not the 92-93 team too. He has to push some buttons now and then, not lay back and wait for the game to come to the Jays, it hasn't worked on 6 games.

Vernon Wells has turned into a poor man's Joe Carter (without the clutch hits, RBI, and home runs).

Well I'm not opposed to changing the line up a bit, let's not pretend like the "magical stubborn stoicism" didn't already help earn us 27 wins.

Lind's batting .333 with runners in scoring position. Tough to argue with right now, on this miserable Monday morning.

You know what would be fan-fucking-tastic?

If Vern and Alex would maybe smash a few baseballs around the park in Baltimore and put an end to the batting order debate.

How about it, fellas? A few XBH, maybe?

Yes, it earned 27 wins, mostly against teams that the Jays are SUPPOSED able to beat. They've been miserable against the teams they HAVE to have. They have to consider that they've gotten pretty embarrassed in those games also.

And remember, it's not just hitting, the seams in the pitching have started to show also.

Yes, it could be a slump, and yes it could even out in the end, but standing pat is not the way to end it in a tough division where a team can go on an 11 game winning streak with its designated power guy barely touching the ball.

@ G Valentino: This - wins against teams that the Jays are SUPPOSED to be able to beat - is the classic argument.

When we play the Yankees and Red Sox well, we lose the games we're supposed to win. So far this year, we've won the games we're "supposed" to win (any games against the White Sox coming up?). So far, we're 1-5 against the Evil Douchebag Empires. It's not a gap that can't be closed, considering how many games we've got left.

The goal is .500 ball against AL East opponents (except the Orioles), and beating up on the teams we're "supposed" to beat.

So I'm not putting any less emphasis on 27 wins because we're supposed to get those wins. A win is a win. We take it.

I don't even know what the fuck I'm saying.

The Jays better win tonight, and as The Ack said, some fucking XBH from motherfucking Rios and Wells would go a long fucking way.