Farewell to the Beej 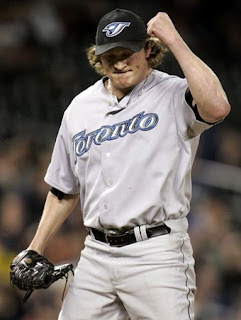 We all saw this coming when you signed on for five years, back at the Winter Meetings in '05. But those worries are for another time, we figured. We're building a winner here!

Very early on in 2007, we knew something wasn't right. Your back hurt, we were told, and your pitching suffered. Alas, the sore back magically morphed into full blown Tommy John surgery (familiar with the term, everyone?), so under the knife you went. "Better to happen now", we all said, "We have three more years on this deal."

In 2008, you took back the closer role (thanks for holding it down, Acorn), and though it didn't appear your stuff was all the way back, you gutted out 32 saves for the team. "That's OK", we all thought, "Everyone knows it takes two seasons after TJ to get it there."

Enter Spring training 2009. Fastballs in the low 80's. A slider that didn't want to slide. "Uh, he'll come around, right? He's a veteran, he knows how to get ready for the season." But it didn't come around. Not even close. "Oh, shit."

So now whatta we do? A closer who can't close, still on the books for this season and next at $10 million per, reduced to mop-up duty. Only the mop must have been saturated, because even that wasn't working. "Oh, shit."

I wish you well, B.J. I really do. You seem like a proud guy, and your struggles today surely aren't for lack of effort. Someone will pick you up - they always do - on Rogers' dime. Good luck old friend.
Posted by The Ack at 12:23 AM

What kind of conditioning did you do in the offseason BJ? Chicken wing?

We did have some good times with Beej. Those times seem awfully expensive in retrospect, but no hard feelings. Good write-up Ack.

I've always been a BJ apologist. This was my final tip o' the cap to him.

Hate to agree with Griff, but it sure looks like Cito's pulling the strings these days.

It's finally an end to a bad situation. It's sad to see him go, but Hayhurst belongs in the pen. He joins other closers for this team that met with a sad ending, Duane Ward mainly.

I don't know why losing him bothers me so much, but I find it sad. I guess I remember his 91 mph fast ball and his unhittable slider better than I do his 87 mph fastball and non-strike slider.

Goodbye to my 2nd favorite BJ ever.

That time in the storage closet of the bowling alley will always be special. Hmmm, what was her name....

His time here was fairly brief, but I do have some vivid memories of the dude. Weird things, like listening to the late innings of a game while driving home, Ryan coming into a tight spot, and knowing he would nail it to close it out (which, in '06, he did).

I really like Scott Downs, but I don't get that same feeling when he takes the mound in the ninth. Better than the '08 and '09 versions of BJ, but not close to '06 Ryan.

I was at the Rogers building when they signed him and afterwards as he was waiting by the entrance for his ride, I needed to step past him for the door...it honestly took me two side steps to get around him he was so huge and wide...he was powerful and awesome at his best. He deserved a better fate but I think he is done...

$15 million is a lot, A FUCKING LOT, of money to swallow. But I guess it had to be done. I'm sure B.J. refused a trip down to the minors, and the Jays were left, really, with no choice. The Cito no longer has faith in The Beej, so he had to go, cheque in hand.

Anyway, great post on his time in Toronto. It began so well and, like many things in life, ended badly. We'll remember the good times.

I'm sad to see Beej leave too. I remember the time when you could trust him to shut the door. Love his personality and fire too. Having said that, I do think he's done but hope he gets a chance to prove me wrong.

I just wanted to say that I can take the Jays having a losing season. I can stand rebuilding, failing, whatever this year turns into but what I can't abide or ever get used to is being lied to. It's just a sore back, this year we're going to run more, 2010 is going to be the year, etc.

No more lies is all I ask.

Sadly we're done now. Under .500 behind the Rays, Sox and Yanks.

Sadly if being under .500 at any point in a season disqualifies a team from the postseason, there won't be any participant from the AL East.

So Lind didn't make the All Star Game. And his quote made me die a little inside:

"I did," Lind said on Thursday. "I was hoping Canada would come out and vote strong. I figured if I played hockey, it would've been a landslide

Prepare for your Roger's Wireless and Cable package price to go UP !!!!

Met BJ Ryan and Brandon League in a bar after the Canada Day 08 game at Safeco.

BJ was smoking a menthol and it seemed cool so I bummed one, and I asked him how stoked he was that Cito was back. He was pretty indifferent.

I told him to get super pumped because Cito was gonna take them to the 'Ship. Then Brandon League told a really funny joke.

Those 2 are gonna wish they took Cito more serious. Or maybe they'll land elsewhere and thrive. I just hope League's next. After Dellucci of course. But NEVER Doc. All for now.
-WAMCO