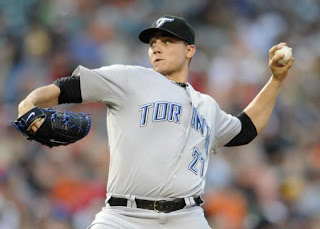 Well, not exactly, but the Jays did manage to end the slide, even if for a day. The first positive contribution from Dellucci (groundout RBI!), a great effort from Franchise Cecil (6 scoreless!), and a bullpen that just might be slotting back into effective form with the return of Downs in the closer role were all reasons to smile. Well, maybe not a smile. Call it a half-hearted grin.

It was a strange mix of emotions that I was feeling during Friday's 2-0 victory over the Orioles....content to win a game, but unable to shake the doom & gloom surrounding the club - or maybe more accurately, the fanbase.

No, these are not easy times for Blue Jay fans. A team falling out of contention. The face of the franchise on the block. Professional baseball player Scott Rolen now rumored to be joining him, and we've seen the end of his hit streak to boot.

There was this tidbit from SI's Jon Heyman, where he (half-heartedly) suggests that fan backlash just may have Jays' brass thinking twice about moving the Doc, but as much as I'd like to believe that making my personal grief public is assisting in stopping the machine, the rumour mill is sure to continue churning until July 31. For my own personal sanity, I think I'm just going to ignore it all for a few weeks.

Email ThisBlogThis!Share to TwitterShare to FacebookShare to Pinterest
Labels: Depressed, I don't know what I'll do if the Jays trade Doc, optimism, Scott Rolen is the Greatest Blue Jay of All Time, The Roy Halladay Depression

They should be damn well worried about backlash. Trading Doc for prospects? Screw that. We have prospects. Why isn't anyone talking about the value-add he brings to the pitching staff? Our youngsters are doing well and a lot of that can be attributed to watching Doc.

And damn it, Doc should be going into the Hall of Fame as a Jay. Screw the organization if they fuck it up.

I stand firm: if Doc refuses to sign an extension, we have to trade him.

Pennant. This shit ain't over yet; I don't give a fuck.

What the hell am I doing up this early? It's 4 AM over here. I blame David Delucci. His ground outs to 2nd cause insomnia.

Thank Doc that Bret Cecil found some poise on the mound. He really has the ability to be something special.

Wasn't a "prospect" involved in their Manny deal? and wasn't the yanks first rd pick involved getting Mark Teixeira, don't they already have a depleted farm system? How good of a prospect can the sox possibly have being that they've been near the best in MLB for a decade now? So, is this hope that all our trading partners don't have pieces needed for ma boy roy? unfortunately with JP running things I'm not so sure.

Also, Did anyone see what Wells is hitting away from the dome? a MLB 5th best .337? WTF? We need home boners too!!

I can't believe Rolen might be on the block too. This week of rumours just keeps getting worse and worse.

Good news-ish.... this is what I've been reduced to. Cheering for Doc to not get traded to one of the axis of evil members. FYI, i guess the jays wanted the ghost of Ruth in return.