Welcome back (to a face slap) 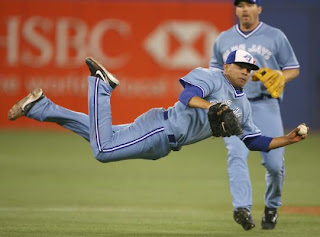 Like many of you, I anxiously tuned in to the Jays' first game back after the All-Star break with vaguely optimistic (it works on so many levels) expectations. Romero! Powder Blues! A chance to stick it to the Sox! Baseball, baby!

That lasted until, oh, the first inning. I can think of better ways to start a game. Nothing spells buzz-kill like a Youkilis homer with Pedroia on board. Barf.

It's just one game, but......in many ways last night's effort was everything I feared. Essentially, there are two ways the team can respond to The Halladay Depression:

(1) Play inspired baseball to show the league (and management) that the team is close to being a contender, or

(2) Come out flat and wait for the other shoe to drop.

If you watched last night's effort, I don't think I have to tell you how the team responded in the series opener against our favourite Nation of Douchebags. Inverse b's, friends.

Julio Lugo's designation for assignment terrifies me
Boy Wonder GM Theo Epstein pulled a Ricciardi in designating Julio Lugo - who's owed about $13M over the next season and a half - for assignment. You'll remember that our own boy wonder (jokes!) has had eyes for one of my least favourite players in MLB over the years, and now it appears he can be had for the league minimum (barring anyone foolish enough to trade anything of value for his "services").

I don't need to tell you how much this terrifies me. With the trade deadline approaching, and our own Ninja-like shortstop approaching free agency.....well, I don't even want to finish that sentence. So I won't.
Posted by The Ack at 10:15 AM

For the love of god, please don't let Julio Lugo and his incessant crotch grabbing ever call the Dome home!

Apparently Lugo is headed to the Mets.

I get the feeling it's going to be a long and tedious rest of the season.