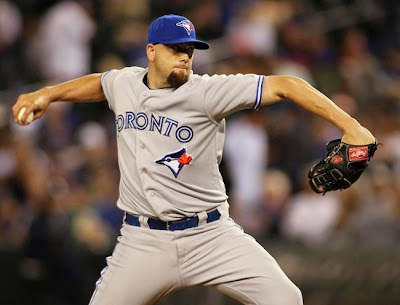 Provenance: Born in Fort Knox, Kentucky. Went to high school in and around Tulsa Oklahoma.
Selected in the 29th round of the 2003 amateur draft by the San Diego Padres. Made his major league debut for the Seattle Mariners on September 11, 2011.

Acquired: Traded to the Blue Jays on July 30, 2012, in exchange for Eric Thames.

Contract Status: Will not be eligible for arbitration until the 2015 season.

Back of the Baseball Card: Pitched 67 games and 73 innings over one season plus one month with the Mariners and the Jays. Posted a 3.82 ERA in 2012 - including a 3.38 mark after the trade to the Blue Jays - striking out 33.6% of batters while walking 9.5%. Was homer-prone in Seattle, oddly enough, giving up 2.2 HRs per nine innings, but dropped that number to 0.9 in his 27 games in Toronto.

Recent Injury History: Fractured right arm while pitching in independent ball in 2009, requiring a steel plate and nine screws to be inserted surgically to stabilize his elbow. Delabar left baseball for a year, but returned when he rediscovered his velocity while testing the radar gun for the high school team he helped coach in Elizabethtown, KY.

Looking Back: In the moment, it seemed as though the deal to acquire Steve Delabar last year might have been one of the least interesting trades the team has made in recent years. If anything, it seemed like the Jays were dumping Eric Thames just to get him out of their system and move on.

When Delabar arrived, he came with the reputation of being a big arm who threw hard but straight, and when he found the strikezone, he often found trouble. But at a time where the pitching corps was ailing and in need of reinforcements, bringing in any warm body with a vaguely functional arm seemed like a not-bad idea. The likelihood of Delabar sticking around in the long term, though, seemed a bit remote.

But something funny happened over the last two months of the season: Delabar began working ahead in the count, upping his percentage of first-pitch strikes. Batters also started swinging at a marginally higher pace, and missing with those swings more often. All of which resulted in Delabar becoming one of the Jays' more reliable bullpen arms in the late stages of the season. In some crazy corners of the interwebs, it even got some people considering the idea that maybe - just maybe - he might be an option  to set up or even close games at some point in the near future.

Having a visually stunning breaking pitch certainly helps to make that case. In September - and standard caveats about the value of stats in meaningless September games apply - Delabar began working his split-fingered fastball into the equation more frequently, throwing it almost as often (114 times) as his fastball (116 times). It seems unlikely that Delabar could keep up a near 50/50 split (pardon the pun) between his four-seam and splitter over the full length of the schedule.

Looking Ahead: While the Blue Jays' bullpen is packed, and features many power arms, there are enough questions about the back end to warrant some lofty considerations for Delabar in 2013.

What's the deal with Casey Janssen's injury? Or what will Sergio Santos look like in his return? If neither of them are effective or available in the early part of the season, Delabar's role could become more vital to the Jays' chances of an AL East pennant.

Does that mean that Delabar could be the closer at some point? It's certainly possible, though most fans would probably wish against the series of events that would bring that reality to bear. On a more positive line of thought, Delabar could serve the team very well as a late inning option to get big strikeouts when necessary.

Pessimistically: Is another hard throwing depth arm in the bullpen. Might walk too many, or get hit hard at times. He still has options.

Optimistically: The end-of-season trend continues, and Delabar strikes out a lot of batters in late and close situations.
Posted by Tao of Stieb at 12:05 PM

How crazy is near future? I had him POSSIBLY closing games in 2015 if Santos wasn't worth his contract options.

Watch for Delabar to come in after Dickey. The Mets did this with Parnell last year. A guy that throws 95+ is hard to track after trying to hit that knuckler.

He grew up in Glendale, Ky. Where did OK come from?