37 Jays - Is Maicer Izturis Ready to Play Every Day? 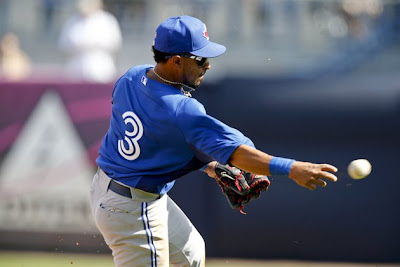 Provenance: Barquisimeto, Venezuela. Signed by Cleveland as an amateur free agent in 1998. Made his major-league debut as a Montreal Expo in the twilight of their final season.

Injury History: Nine separate DL stints in his career. Issues vary from knee and hamstring issues early in his career, thumb surgery that ended his 2008 season, and shoulder trouble that sidelined him and rendered him ineffective in 2010. Was mostly healthy last season, with the exception of a ribcage issue late in the season.

Looking Back: There was a brief moment in November - before the joyous tumult of the rapid roster reconstruction - when Maicer Izturis was sum total of the Blue Jays' offseason acquisitions.

At the time, it seemed like a tidy bit of business: A veteran with a lot of versatility around the field - and a switch hitter to boot - who could fill in around the infield. If you were feeling particularly happy in the moment, you might even imagine him replicating his 2009 season (.359 OBP/.434 SLG/3.4 fWAR).

That season will likely go down as the high point in Izturis' career, but there's still value to be drawn from him in the later stages of his career. He's still a player who doesn't strike out a lot, makes lots of contact (89.5% of the time), and just two seasons ago stroked 35 doubles.

In the field, Izturis has handled second, short and third with little fall off at any of the three positions. The Ultimate Zone Rating metric - as frustrating as it is - looks with a mostly kind eye on his work at third and second, while there seems to be a lot of noise in the measurement of his work at short (really high highs and weirdly low lows). If you step back from those numbers and couple an impressionistic approach with the eye test, Izturis seems to be an estimable defensive player wherever his glove is utilized.

Even with that defensive versatility, Izturis struggled to keep himself in the starting lineup over the past eight seasons with the Anaheim nine. When his performance was ascendant and he managed to eke his way into an everyday role, injuries would sidetrack him and he'd find his way back to a fill-in role.

Looking Ahead: The frequency with which Izturis has been hurt should be a concern, especially if you ponder the possibility of his production being on a downward trajectory in the next three seasons.

If his shoulder issues have robbed him of whatever marginal increments of power that he had in the first place, Izturis' bat might not be enough to keep him out of a bench role for a team that is intent on contending this year.

As a second baseman - and it increasingly looks as though his defense might win him the starting role there - Izturis rates close to the league average offensively. (The average output for second basemen in 2012 was .318 OBP/.383 SLG according the Baseball Reference.) With a little BABIP luck, he could hold his own at the bottom of the order simply by getting on base to be cashed in when the lineup turns over and the bigger bats come up.

Pessimistically: Injuries take him out of the lineup for significant portions of the season, and limit his effectiveness when he is able to play. Loses starting job, and spends more time as a defensive replacement.

Optimistically: Is healthy enough to find some of the doubles power he displayed in 2009 and 2011. Possibly moves his way up the lineup to the sixth or seventh spot. Locks down the second base job and holds on to it all year.
Posted by Tao of Stieb at 12:42 PM