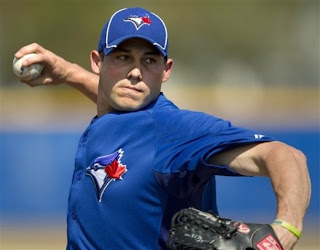 Acquired: Drafted by the Blue Jays in the first round (33rd overall) of the 2000 MLB amateur draft.

Looking Back: You'd think that we would have learned by now not to get overly excited by the sparkles and flashes that are conveyed through second-hand accounts of Dustin McGowan's progress.

It's been too long. There have been too many setbacks. There might not have been enough quality there in the first place. And yet, we're captivated. Tales of one spring training inning - ONE INNING - and people get hooked anew by the promise of Dusty and his "stuff".

Oh, stuff. It's such a mesmerizing thing. An intricate weave of velocity, movement, and aspirations. You'll note that when people speak of McGowan's stuff, they invariably invoke the names of Roy Halladay or Chris Carpenter, in part because the ambition among some fans and some media is that the big right-hander assume that mantle. Even with Brandon Morrow and Josh Johnson already on board, there's an appeal to the recent history of the Jays, and McGowan is the next piece in that narrative.

This isn't to completely dismiss the notion that McGowan could be something. In his erratic return to the Blue Jays in 2011, his fastballs would peak in the high 90's, though where they ended up was anyone's guess. That sort of power can occasionally gloss over a lack of control on occasion, but it's not a path towards long-term success.

Looking Ahead: They say that past performance is the best predictor of future success...but is there anything meaningful from the past four years of McGowan's career that we can look upon to find insight as to what he might be this year?

The most likely scenario for this season is that McGowan pitches in some portion of the season, and might add his name into the growing and impressive list of hard-throwing right-handers. But does that mean five games? Or 10? Or 20?

The other scenario that has the potential to play out is that the Jays attempt to slip McGowan through waivers in order to kick their decision on him down the road. His million-and-a-half salary this year and next might be enough to ward off some teams that don't have the levels of attachment and patience necessary to wait and dream McGowan through another season.

Pessimistically: Never makes it off the complex. Begins looking at a career after baseball.

Optimistically: Is healthy enough to play baseball, and good enough to matter to the big league team.
Posted by Tao of Stieb at 4:10 PM

Ive been a fan of Dusty's for years. You may not like the way the Jays gave him a loyalty contract, but you cant help but respect and appreciate a guy like this who works his ass off to try and make something of his talents. He's never given up and he continues to fight to save his career. Nothing by respect for him, and the best of luck.

Agreed. What we all like about him is that we all want to believe that potential will pay off, that hard work and dedication gets rewarded and most of all, that guys who are perennially unlucky (with injuries) don't get beaten by life.