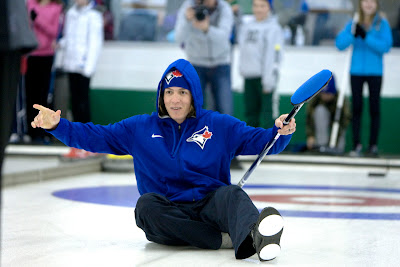 Acquired: Via trade on July 27, 2011 as part of a three-team deal with the Cardinals and White Sox. Many players were involved. But that's neither here nor there.

Contract Status: Avoided arbitration with a one-year, $4.675 million deal in January. The Blue Jays hold one more year of arbitration rights before Rasmus becomes a free agent the 2014 season.

Injury History: Missed a few games with groin problems in 2012. His only DL stint over his career was a month in late 2011 with a wrist sprain, but he has a long list of minor boo-boos in recent years: Fingers, abdomen, leg, knee, ankle, foot.

Looking Back: Colby Rasmus has become a polarizing figure among Jays fans. Many casual observers wonder what the fuss was about this alleged blue chip prospect who strikes out too much and never seems to live up to the hype.

On the other hand, those who like Colby like him a lot. If you cut up the season into convenient slices, you can find moments where he looks like the emerging star who can provide very good defense and tear the cover off the ball at the plate.

For instance: If you take the 52 games from May 5th through to the All-Star break, Rasmus posted a .908 OPS (.352 OBP) with 13 homers and 14 doubles. He also lowered his strikeout rate to 16.7% over that period. He was exciting in much of that first half of the season, and a fan could start to dream on the idea that he was finding his footing. If only that was the end of the story.

Following the All-Star break, Rasmus fell off significantly, with an almost unfathomable .515 OPS through his final 66 games of the season. Part of that might have been due to extraordinary bad luck, as evidenced by his .227 BABIP post-break. But it seemed as though some of the improvements made in his swing and approach - the quicker, quieter swing and his daring proximity to the plate - went missing at times as he struggled down the stretch.

I hate the word "inconsistent", because it is entirely overused in sports talk. But Rasmus seems to tinker with his swing and approach and mindset so often that you never really know which player is about to step into the box on any given at bat.

Looking Ahead: One wonders if Rasmus heard Anthony Gose's footsteps behind him as they took they took their frigid tour of Western Canada this winter.

While Gose might have struggled in his first taste of the Majors, there's reason to believe that over a full season, he might be able to put up equivalent offensive value to Rasmus' while providing defense that is at least the equal if not better. You have to think that the Jays' brain trust will closely monitor  the return on their investment in Rasmus in 2013 with a view towards planning out the 2014 season.

And if we're talking about these players in econometric terms: Colby Rasmus is a volatile commodity. At Colby's best, it's hard to imagine anyone in the Jays' plans matching his dynamic offensive game. At his worst, he's a below-replacement-level centrefielder who might struggle to maintain his playing time on a team with more depth.

For those of us who genuinely like Rasmus, love watching him play and constantly hope for him to prove himself to the non-believers, this year could be agonizingly tense.

Pessimistically: Rasmus continues to hack away at the bottom of the order, doing little to keep his spot. He paves the way for a move out of Toronto to become someone else's reclamation project.

Optimistically: In a deeper lineup where he could have become a role player, Rasmus asserts himself as a significant bat in the middle of the lineup, posting an OPS over .800 with game-changing power.
Posted by Tao of Stieb at 4:05 PM

Only FireJoeMorgan can bitch about inconsistent. It is known.