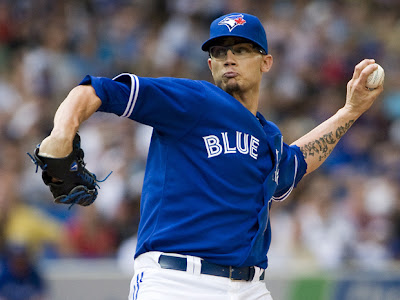 Who: Brett Aarion Cecil. Sport goggle aficionado. Left-handed pitcher, most recently in a relief role. Six-foot-one, with a weight listed at 215 pounds, though that is a moving target. Jersey number 27, age 26.

Provenance: Dunkirk, Maryland. Selected with the 38th pick overall of the 2007 amateur draft by the Blue Jays out of the University of Maryland. Made his major league debut less than two years later, on May 5, 2009.

Contract Status: No contract signed for 2013 as of yet. Is out of minor league options. First year of arbitration eligibility is next season.

Recent Injury History: Nursed a groin injury for two months of 2012 in the minors. Injured pitching hand cleaning a blender in 2011. Had a case of the dead arm in late 2010.

Looking Back: There are few players who are more confusing to evaluate than Cecil. For a few moments, Cecil was the Jays' best pitching prospect, and seemed to solidify a role in the rotation after a solid 2010 season: 4.22 ERA, 117 Ks and 54 BBs in 172.2 innings...and a 15-7, if that's your style.

If you were paying attention closely in the final months of the 2010 season, though, there were signs of the struggles that were to come. Cecil was shelved for a week with arm fatigue, and saw his fastball velocity drop off by a couple of miles per hour. In the moment, you could have written it off as a typical late season lag, but in the ensuing two years, that velocity never really returned.

With less heat behind his pitches, Cecil's homer-to-flyball ratio exploded from a very respectable 8.7% to 13.3% in 2011 and 14.5% in 2012. Couple this with a simultaneous rise in his fly ball rate - perhaps as a result of a less effective sinker? - and you see a rapid decline from a pitcher with peripherals that were tenuously those of a major league starter.

Towards the end of 2012, Cecil re-emerged in a return to the bullpen. With less of a workload per outing, Cecil seemingly felt free to let fly in his short stints, and his fastball velocity in September popped back up above 92 MPH.

One other odd note about Cecil in 2012: He has seemingly abandoned his slider, choosing to go with a curveball as his breaking pitch of choice. Throughout his emergence through the Jays' system, Cecil's slider was always the breaking pitch that was mentioned in the shorthand analyses of his arsenal, but by September of last season, he had seemingly stripped it out of his game, tossing the pitch just three times in 12 appearances at the end of last year.

Looking Ahead: A closer in college, the Jays spent much of the past five years stretching him out to make use of his expansive repertoire. Now, his best hopes to stick on the big league roster - and indeed, with the organization - come as he shifts back to the bullpen.

The Jays find themselves in a position where they have a fair bit of left-handed pitching that can step into the big league club's bullpen. In the pecking order of bullpen southpaws, Cecil will enter the season behind Darren Oliver and slightly ahead of Aaron Loup based on the latter having options remaining. Later in the season, Luis Perez will re-enter this crowded situation if his recovery from a July 2012 Tommy John procedure is successful.

Given that competition, Cecil will need to be something more than a middling middle-reliever to retain his spot on the roster.

Pessimistically: Cecil's homer rates continue to rise, and he shifts to the back of a smaller bullpen. And when you start to back yourself out on a plank like that, it isn't long before you realize suddenly how short it really is.

Optimistically: A more focused approach and the return of some velocity makes Cecil a reliable option to quell mid-game rallies. Pitches well enough to get a nice deal to buy out a few arbitration years.
Posted by Tao of Stieb at 11:38 AM