37 Jays - The Outside Chance of Jeremy Jeffress 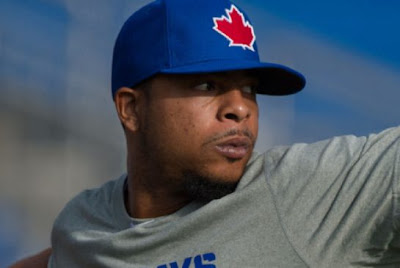 Provenance: Born in South Boston, Virginia. Selected with the 16th pick overall of the 2006 amateur draft by the Milwaukee Brewers out of Halifax County (VA) High School. (No, really!)

Acquired: Purchased from the Kansas City Royals on November 8th, 2012 after being designated for assignment.

Contract Status: No contract signed for 2013 as of yet. Is out of minor league options.

Looking Back: If you knew much or anything about Jeremy Jeffress before this offseason, it might have been for his inclusion in the trade that brought Zach Greinke to Milwaukee. If you're enough of a fantasy baseball geek, you may remember his name being tossed around as a potential future closer after a nice September callup in 2010.

Or, perhaps you saw his name drift across the newswire for his multiple suspensions for marijuana use. Those three formal admonishments now leave him in a situation where his next smoke will put him (so sorry for this) one toke over the line.

(Perhaps I'm indulging in cornball references to songs from the 1970's to get over the idea that someone could be suspended for life from baseball for smoking weed, while a long list of ballplayers face little or no repercussions for getting liquored up, stumbling into the driver's seat of their car and actually driving off in a stupor. It's so far beyond absurd that I'll never understand it.)

Setting the off-field matters aside, Jeffress is an intriguing player. He has shown tantalizing velocity throughout his development, regularly touching 99 MPH with his fastball. But while he has always been able to let it fly, he seemingly had little sense of where it was going once it left his hand.

If you wanted to add a sympathetic note to Jeffress' minor league résumé, you could point to the fact that he travelled the bumpy and inhospitable road through the Texas and Pacific Coast leagues after the trade from Milwaukee.

Few young pitchers make it through that path unscathed, and Jeffress' first exposure to those leagues saw his K/BB ratio shrink to 1.10 in 2011.Was he pitching around batters? Attempting to avoid contact? Whatever happened initially, he improved that same metric dramatically last season in his second go-round in those hitters' leagues, with a 2.46 mark. Not dazzling, but an improvement to be sure.

Looking Ahead: Jeffress will be hard-pressed to make the Blue Jays out of Spring Training, and until several readers asked for a preview piece on him, he wasn't even going to make the cut in this 37-part series.

Jeffress' profile is very similar to Esmil Rogers, another fireballing bullpen righty who is out of options, and without a number of injuries between now and Opening Day, it is hard to imagine both of them remaining a Blue Jay into April.

Through the first few weeks of pre-season action, both pitchers have struck out a lot of batters - 11.4 per nine for Jeffress, 12.9 for Rogers -  while keeping their walk totals reasonable: two walks each through 6.1 innings for Jeffress and five innings for Rogers. Both have given up a lot of hits - Jeffress: 6; Rogers: 7 - though the latter's hits seem a little more apt to leave the yard (three homers to one.)

But then, that's a tiny sliver of spring stats, to be taken with all the salt in the sea.

If it comes down to a choice between the two where the performance in the fake games of pre-spring create little separation, one wonders if the cost of the players might enter the equation. Rogers was the player that ultimately was the return for former manager John Farrell, while Jeffress was essentially a free pick up.

And while it might be unfair, the fact that Jeffress is so close to a lifetime ban might ultimately make him the more volatile asset. Which is terrible.


Pessimistically: Jeffress loses the handle in a couple of late spring games, and finds his way onto the waiver wire. Another team is certain to take a chance on him, given the opportunity.

Optimistically: Continues to show improvements in control, and ekes his way onto the April roster. Establishes himself as a solid middle reliever who can shut down a rally with a key strikeout.
Posted by Tao of Stieb at 11:46 AM

I want to preface this by saying that I'm not nitpicking - just pointing something out that I find very interesting with regards to this line:

And while it might be unfair, the fact that Jeffress is so close to a lifetime ban might ultimately make him the more volatile asset. Which is terrible.

The thing is, Jeffress is out of options, so he can't (easily) be sent down to the minor leagues. Incidentally, smoking weed is only a punishable offence in the minor leagues. MLB players can ingest or inhale basically whatever they want ("PEDs" notwithstanding).

So I'm not sure that a lifetime ban is really a concern with Jeffress anymore, if only because his contractual status makes it very difficult for him to end up in a place where he might actually be subject to those ridiculous rules.

Yeah, IIRC smoking reefer is only a big nono in the minor leagues.

I dunno, combination of his contractual status + vague reports from camp + gut says that he goes north with the team.