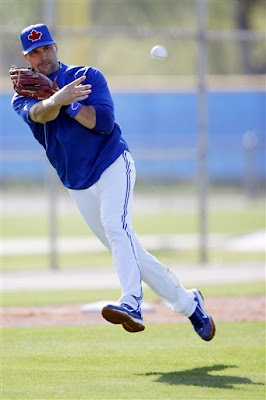 Provenance: Passaic, New Jersey. Not far from Hackensack. Selected by the Atlanta Braves in the seventh round of the 1996 amateur draft out of the University of Pennsylvania. Debuted for the Braves in September of 1998.

Injury History: A long list of ailments over the past five years have served to limit DeRosa's effectiveness. Missed two months early and one month late in 2012 with oblique strains. Missed more than three months of 2011 with wrist problems, which had previously ended his 2010 season in May.

Looking Back: His medical chart screams "retire already!". He hits the ball so tepidly that his isolated power numbers over the past three season - .065, .023, .059 from 2010 through 2012 respectively - profile more along the lines of a skinny teenage infielder.

DeRosa's real skill or added value to the team is alleged to be the way that he ties the room together, not unlike like Lebowski's rug. If that's the case, then you'd have to assume that his intangible value is off the imperceptible chart, if only because the less ethereal value is so scarce as to be impossible to find in the stat lines.

It wasn't always thus, and there was a moment in his career where DeRosa had emerged as a second-tier star. After signing a three-year deal with the Cubs in 2007, DeRosa more than lived up to the bargain, posting an .800 OPS (.355 OBP, .445 SLG) through the deal's conclusion with the Cardinals. He averaged 18 homers, and filled in admirably around the diamond, getting reps everywhere but pitcher, catcher and centrefield.

Injuries have severely limited DeRosa in the past five seasons, and his wrist injury seems to be chronic. If past injury history is the most telling harbinger of future trouble, the chances of getting much more than 100 plate appearances seems remote.

Looking Ahead: The current narrative is that DeRosa is in camp to be the new, older and wiser best pal for Brett Lawrie. Maybe he's there to hide the Red Bull, or to suggest a use for his time and money that doesn't include more ink on the marginal segments of exposed flesh that the young phenom has remaining.

With today's news that Lawrie will start the season on the DL, though, it seems as though DeRosa will have a role to immediately fill in for the first week of the season, and maybe longer.

For all of the data that has piled up through a long career thus far, it is hard to say what to expect from DeRosa in the short term. Is there any pop left in his bat? And that's not to kid ourselves into thinking of him as any sort of power threat...but can he hit a double? Or send something past the infielders with enough gusto that a .235 BABIP doesn't become the norm?

Pessimistically: Gets injured quickly, ushers in the Andy LaRoche era before they even start opening the dome on a regular basis.

Optimistically: 2009 is a long time ago now, but is it out of the question to think that DeRosa could keep his OPS above .700 and play in more than 50 games?
Posted by Tao of Stieb at 6:00 AM

If we're referencing The Dude when talking about DeRosa, can we call him DudeRosa?

DeRosa has said his wrist feels better, and the numbers support that assertion. He isn't going to be 2008 DeRosa at the age of 38, but if his wrist continues to be sound, he could actually be valuable outside of mentoring Brett "Redbull gives you wings" Lawrie