Who really holds the keys? 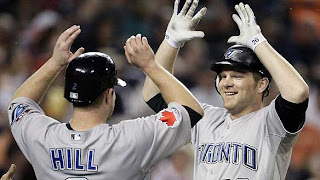 I have to admit - even I'm getting sick of my subtle (?) pissing and moaning concerning the lack of improvements made to the big league roster this winter, following up on a season full of promise. It's easy to get caught up in the daily talk and innuendo surrounding each and every player available through free agency - or made available via trade.

With the Jays tied to them all and coming home with none, I fell into a solemn state of acceptance that improvements to the big league squad would likely come later rather than sooner. Surely with this young club, the logic went that every step forward is likely to be countered by a step back.

And while every conversation surrounding the team's potential success in 2011 invariably includes some variation of a throwaway line on the re-emergence of Aaron Hill and Adam Lind... have we ever really - I mean, really - considered the potential impact there?

Look at those numbers for a moment. The dropoffs are staggering, and it's hard to believe an 85 win team ran those two statlines out for 600 plate appearances each. Begs the simplest of questions:

What in the fuck happened?

While it's fair to say that Lind's 2009 season was his likely high-water mark, a return to .850 seems entirely reasonable. Aaron Hill will likely never hit 36 home runs again, but neither is an OPS hovering around .800 with great defense a reach.

Think about those numbers again & their contributions to the '10 Jays. Now think about the '10 Jays with numbers approaching "reasonable" from each. Of course, nobody expects Jose Bautista to lead the league in home runs and beard growing again (OK, maybe beard growing), but I don't expect just 14 longballs from Travis Snider either. Shaun Marcum's 13 wins and post-game quips won't be easy to replace, but 2011 should see full seasons from Kyle Drabek and New Brandon Morrow.

I suppose what I'm trying to get at here - as awkwardly as ever - is that we don't need the Big Splashy Move to have hope for another step forward for this Jays club.

Stable does not necessarily equal stagnant.

And since I'm here.....Early Season's Greetings
Sincerely wishing every one of you who takes the time to read this page a very safe and happy holiday season. With the Tao off gallivanting (fun word) across the land down under and this dude unlikely to be back until sometime after the 25th, here's hoping you all enjoy the break with those you love.

Happy Holidays, everybody.
Posted by The Ack at 12:14 AM

Email ThisBlogThis!Share to TwitterShare to FacebookShare to Pinterest
Labels: 101 Reasons for Offseason Optimism

What moves would I have liked to see, that were realistic?

That would have cost Rogers ~$30-40MM annually, with Uggla extended, leaving at year's end for comp picks or traded beforehand.

Even with these additions, and arb raises, the payroll for 2011 would have been ~$90-100MM, and the Jays would be a legitimate contender. Of course you would not have traded Marcum.

$100MM makes this team a contender.

Going into 2011 with a ~$60MM payroll is fucking pathetic, especially considering the quality of the rotation and how cheap it is. Most teams would see this situation, where ~$40MM was coming off the books, as a major opportunity to add a few major pieces, and at least try to contend. Even if they only won 88-90 games, they still would drive ticket sales and interest in the team among casual fans, and may even have stayed in the hunt through August/September.

Rogers talks a major amount of shit. They slashed payroll, and refuse to spend until the team starts drawing more fans, and that, they even admit, will only happen with contending/winning 90+ games. It is as simple as that. They are cheap cunts. Dunn and Uggla would not block anyone, or cost the future of this team a single thing, other than $25-30MM/yr.

So the Jays' current roster had better perform, or we will never see an influx of cash, unless it is 3-5 years from now, when (IF) our farm produces some stars that all come up at the same time.

I don't post as much, but I still check the site just about every day. Thanks to you and Tao for breaking up my work day.

Thanks to both of you for all the hard work you put into this blog. You guys really do a terrific job.

Have a great Christmas!

All the best Ack (and Tao). I agree with Bret, I appreciate your hard work giving me something to read at work. Merry Christmas to you and yours.

Echoing others as I really enjoy coming here.

Aaron Hill had probably the most puzzling season in history. His line drive percentage was 10.6 percent. I've never seen one that low before. It's amazing really to hit that few balls on the screws, especially as he's averaged close to 20% most of his career. Puzzling. You have to believe he will come back. Lind should come back too. That would be like two good trades if they get back to at least three quarters their 2009 levels.

I agree completely. If Hill and Lind even bounce part of the way back to their '09 selves, that should offset the expected regression of Bautista.
Why do we need Uggla, and why do we need to sign relievers at $5 million apiece? 2012 is when this team will be ready.

Thanks for the year of posts. I hope thay my site will be as respected as yours one day...

Merry Christmas to the Ack and the Tao.

If only 'ifs' and 'buts' were candy and nuts, then we'd all have a wonderful Christmas.

#1 Sign Adam Dunn - as a DH only, I see the merit of this, but I don't think he'd come to the Jays after the Ricciardi comments and is this really the guy you want to build a team around?

#3 Sign Encarnacion as a bench player - if he's not playing a big role, don't sign him. I completely agree with the sentiment that this guy gives you Derek Lee/Adam Larouche production at bargain basement prices


#5 Retain FLewis or get a better 4th OF - This doesn't make any sense at all, there are a million equivalents that you can pay a lot less for

#6 Pick up Olivo's 2011 option to back up Aaron Cibia - Olivo was awful in the second half last year, I'd rather have the draft pick

Even with these moves I don't think the Jays compete for a playoff spot. None of these guys are impact players and would just take away money I would prefer be spent on vital pieces when the Jays are actually a serious contender.

I disagree with all the potential moves suggested by Wolf above. As was pointed out to me, the championship teams we almost completely homegrown or trades, with only a few short-term free agents signings. Looking at how crazy the off-season has gotten, I'm glad we stayed out of the craziness. I'm happy to spend next year seeing what we have. It should be fun, and that's really all I ask.

Thanks to you, Ack and Tao for writing my favourite Jays blog. I'm always excited when there's a new post here and you guys never disappoint. Happy holidays!

All the best, Ack & Tao. Merry Christmas, happy holidays, and all the best in 2011. I mean this in the most not-awkward way as possible, but I love you both.

There is another buy-low, post-hype ex-uberprospect out there in the weeds that I'd LOVE to see AA give a chance to, that would come dirt cheap.

Really, even if he craps the bed again, what's the harm in giving him a 2011 chance? We're not going anywhere, it bumps JB to 3rd, and makes Davis the 4th OF. Really, we sign C-Patt as a depth option (please, please, please tell me you're ok with 500AB's in Vegas, Corey), with Milledge sitting there still?

Let's all remember how disappointing the 2009 offseason was. People were seriously suggesting that the 2010 team was about to lose 100 games.

If all of those things happen, the worst case scenario is we will have a better idea of what this team is capable of in 2012. Best case scenario, everyone realizes their potential, and we all laugh about our offseason complaints.

Let's all remember how disappointing the 2009 offseason was. People were seriously suggesting that the 2010 team was about to lose 100 games.

If all of those things happen, the worst case scenario is we will have a better idea of what this team is capable of in 2012. Best case scenario, everyone realizes their potential, and we all laugh about our offseason complaints.

am i the only one who remembers adam dunn spouting off after the world baseball classic about how boring the city of toronto is? he was also complaining about the way the wbc was schedualed and stuff. maybe i'm way off...

I'll echo the thoughts about thanks to Tao and The Ack for the blog, you guys for sure have the highest nailing percentage out there.

I'm with y'all on taking a chance on giving a former top prospect a 3 or 4th chance. How did Delmon Young look compared to Lastings Milledge before this year?

Anon, I think you mean Chipper Jones. Jones was the guy talking about WBC scheduling & how bored the players were.