If Patience is a Virtue.... 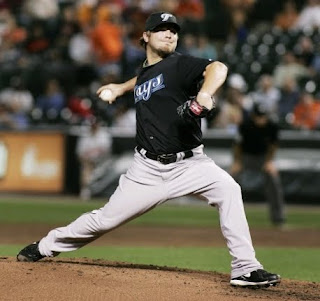 .... then Alex Anthopoulos is a saint.

The Red Sox trade for one of the steadiest & most prolific sluggers in baseball? "We don't need Manny that badly." Oh, you don't? Well, how about if the Sox then go scoop the Angels by signing Carl Crawford? "We won't give in to daydreamin' Dayton Moore's outrageous ask for Greinke."

And the Greinke decision is the right one. He's one of the most coveted arms in the game, but coughing up future top of the rotation arm Drabek along with middle of the order bat Snider, PLUS more highly rated prospects? Lunacy. And I recognize the potential to be tarred & feathered as a prospect-porn hypocrite here...... but there's a difference between this situation and last winter's Halladay affair. Drabek and Snider are ready right now. They aren't seasons away and they've already flashed success in the major leagues at tender ages.

Would I swap out Drabek in a package for Greinke? Yeah, I probably would. But that's no knock against Young Kyle (h/t - Jamie Campbell), it's an acknowledgement that to trade for an ace, you probably have to give up a (potential) future ace. Plus, the Jays system is now suddenly loaded with high-ceiling arms that could potentially be the next Drabek (Aaron Sanchez), or a reasonable facsimile (Stewart).

Snider's the dealbreaker here, for me. There's nobody else in the system, or even on the major-league roster (prove me wrong, Jo-Bau) like him. Sure, he might never progress further and settle into a career as a .260 hitter with 30 HR power and a strikeout rate closer to 200 than 100. But he also just might develop into a high OBP masher consistently knocking 40 laser shots out of the park per year. Those are the kinds of players you build around.

So wait Moore and the Royals out. See if the price comes down. And if the eventual loser of the Cliff Lee sweepstakes gives in? So be it. Let them pay that price. And if they don't? You know Anthopoulos will be on the phone.

I'm with you all the way. A Drabek for Greinke deal straight up makes sense. But not with Snider and others. I hate when teams trade their on-the-cusp prospects. Part of the fun of baseball is watching the next new star develop.

one question i am left with is what to do re: the 2011 season. i have no real sense of whether AA wants to improve on 85 wins or not.

it is clear now that the Jays have little chance of making the playoffs given the off seasons of the Red Sox and Yankees. (I suppose it's possible that the Red Sox will run away with the division and the Yankees will take a step back, but i doubt it. Both teams will win a lot of games.)

The only remaining piece on the roster that is arguably too old (with respect to both skills and controllability) to be around when the Jays are in a position to break through is Bautista. Is there any reason to hold on to him if you can get high ceiling prospects for him now? If he has another great year then you're looking at 2 picks when he hits free agency. If he has a mediocre year then you're looking at 1 pick or nothing, or scraps at the trade deadline. Dealing him now seems to be the sensible thing to do, i.e. selling high.

on the other hand, if you aren't going to get rid of him then don't you have to sign a significant DH (Manny)? what's the point of having all that power in Bautista if you're not going to improve the pieces around him? shouldn't you at least try to catch lightning in a bottle?

I think AA was (and maybe still is) on Greinke solely on the "elite players" mantra he's been following. And I don't think the Jays as an organization care much about how many wins they'll get over the next two years as long as they keep trading Marcums for Lawries and Gonzalezs for Escobars. Attendance was brutal last year but TV numbers were very good. If they stick with the plan,
the fans will come back eventually. The previous GM kept switching horses. The easiest way to see the 85 win season was a bit of a mirage is to look at the record with the Baltimore games out of the picture. That's the team I'd think I had if I were Anthopolous. Sub .500, showing some positive signs.

I wouldn't trade Drabek straight up for Greinke, never mind throwing Snider in the mix as well. I'd rather watch Drabek growing, maturing, improving and winning his Cy Young award over the next 6 years here much more than anything Greinke delivers in the two years he's here. Besides we're not going to compete in 2011 or 12 anyway so why give away the future????? I think Greinke's had his career year,is over rated and if the Yanks have a serious concern about his ability to pitch in Yankee stadium, so do I.

Good point on Bautista. He'll be an interesting case to watch. Either an important part of giving the Jays an outside shot this year or a guy to trade at peak value.

What I wonder about is that there's been a fair bit made about Bautista's value as a player from the Dominican, in terms of attracting other players from the DR, even helping any other Latino players become more comfortable (eg, Escobar).

I guess we'll see how he does and how the team does during the season.

Yeah, I agree with Doug Drabek. Not sure the average fan that Rogers would like to see in the seats would view it that way, but if the Jays gave up Drabek and Snider for Greinke, I would not be high-fiving anyone.

there is a misconception that JP and many fans share and that i fear AA shares too: that the jays are not ready to win now (or weren't in 08, 09, 10) because they don't have an all star in every position. if you look at winning lineups, they have 2-4 all stars and 5-7 useful cogs. even the 2011 red sox look to have 4 all stars at most in their lineups (youk, pedroia, crawford and gonzo). and while it does look like the redsox are champion calibre, there is no guarantee the yankees won't fall back. without lee, their rotation is mediocre, and their lineup is one a-rod injury away from being worse than the jays.
if we pick up laroche or damon we have a chance this year (we would have a better chance if we kept marcum too)...there is no reason to keep pushing the timeline back...it's not like the redsox or yankees won't buy players in 2012, 2013 etc...

I think that Ramirez should be given some consideration for part time DH and stick him in left field the odd day (I know he isn't the best fielder)....he for sure would bring some interest to casual baseball watchers, sell some seats. He likes John Farrow and might just surprize everyone. If he stinks, then he can be released.....but maybe worth a look.

Why does everyone say 'if you throw out the Baltimore games'? All the other AL East teams get to play them too, so that is a pointless fucking argument.

The Orioles fucking sucked is the point. If you're getting all dicked-up about 85 wins, you don't include the bar slut in your figuring. Especially when you were first in line. What were we, 17 out of 20 or something? High fives.