An irrational argument for Cliff Lee 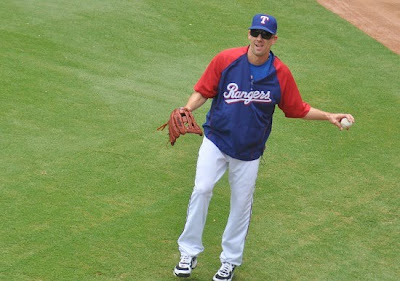 Okay, so seven years is entirely too long for a pitcher (in spite of how free and easy Cliff Lee's delivery seems to be), and on that level, we shouldn't even go where we're about to go.

And moreover, Lee is an Arkansas boy, and we'd presume that moving to Canada until sometime in 2018 isn't high up on his bucket list. For someone who grew up that far from the 49th parallel, we would imagine that Toronto might just as well be Nome.

But if the much coveted hurler were here before us, we'd offer him this reason to consider looking at a deal to come to the Blue Jays:

You remember that guy who got traded from the Jays to the Phillies? Which precipitated you being moved from the Phillies to the West and then to the South, so that they could make room for their new shiny staff ace...you remember him?

You remember how the day that you got shipped off, how that dude's wife was all like: "Cliff Lee wasn't even supposed to be here...we were supposed to be here all along, so he was just keeping the uniform warm for us until we got here." Ring any bells?

You know how many times that guy brought Toronto to the playoffs? None. And how many big games did he pitch in here? None.

And you know what you can do? You can come to Toronto, take a team that's about the emerge into a contender, take them where That Guy never could, and shove it right up his ass.

Now would that (along with seven years and $155 million) be something that interests you?
Posted by Tao of Stieb at 12:38 PM

Come on! If this line of thought was enough to motivate Cliff Lee to take Toronto to a World Series victory, couldn't you get behind that?

Stop living in the past!

As much as I liked that other guy, I can't argue with the logic here. :)

Did Halladay's wife really do that? Or am I simply--in the words of Bugs Bunny--gullabull?

It's an intriguing argument. He had a chance to take Texas where they hadn't been and that's always a better challenge than taking the Yankees back to where they've been a million times.

Speaking of irrational arguments, I say Anthopoulos jumps into his hot tub time machine and go back and make sure that the Alex Rios for Tim Lincecum deal gets done.

It's best not to even contemplate a Cliff Lee signing, but that being said, if the Jays do think that they will be competitive within the next 3 years, why not sign a premier player now that you believe will still be dominant at that point? It is foolish to think that a premier player will be available 'when this team is ready to be competitive', they don't come around very often.

"And moreover, Lee is an Arkansas boy, and we'd presume that moving to Canada until sometime in 2018 isn't high up on his bucket list. For someone who grew up that far from the 49th parallel, we would imagine that Toronto might just as well be Nome."

I wonder about this. I, for one, am fascinated by the American south, simply because it's so different from where I've lived most of my life. Don't you think there are at least a couple MLB players who have thought about playing in Japan just for the adventure and exoticness of it, despite the obvious detriments like salaries/language barrier?

Then again, I'm more "pass through for a few weeks" interested than "commit to seven years" interested.

Beyond all of your excellent analysis, you forgot to mention that The Jays have not yet been connected to Lee. Since reports never surface about players that the Jays are pursuing, logic dictates that they are deep in discussions with Lee's agent as we speak. They must be the mystery team that is offering 7 years.

Also: I think it would be great to have Lee for the first 4 years of any deal. I have no confidence that he will agte well beyond that. Few do.

would it be possible to front load a contract so that most of the money you're paying comes in the first few seasons? that way with the jays lower payroll for the next couple of years a lee signing wouldn't hurt and then in the regression years you wouldn't be massively overpaying an innings eating vet and would still have some flexibility to sign homegrown talent and such. vernon's contract wouldn't look sooo bad if his big paydays weren't still on the way. don't know what the players union or agents would have to say about a deal structured where the majority of the money comes in the first half of the contract but if i were a player i sure as hell wouldn't mind it one bit.

Hey if rogers has enough money to buy a majority share of MLSE then why couldn't Toronto be "the mystery team"? I'm sure that Marcum move was made to open space for somebody else. Maybe that's why they haven't pulled the trigger on Greinke????? Just a thought

Xave, I've lived in the Old South. Trust me, all the good ole boys want to be near their mamas, all their cousins out to the fourth ones,the local catfish ponds, and their big wheel trucks with the gun rack and stars and bars bumper stickers. Hell most of them hardly ever leave their home counties unless they are in the tender care of the State Corrections Dept. And that would be about half of them.

All pitchers get hurt sooner or later. All them. Major injuries. Sometimes more than once. Like Dustin McGowan. Or Rich Harden. Or Prior and Kerry Woods. Look at Strasburg last year, he could be done for good by the all star break. 5 years for a young gun like Romero is a gamble. 7 years for a 32 year old is insane.

it's not insane if you have insurance on the deal. Of course the insurance might be 30 million in itself.

first time checking your blog but i like what i see. Halladay's wife said that? Ouch!

Lee, you basically HAVE to do it now.

Rob (North Side of the Diamond) said...

Nicely done! I love it.

Paul! We missed you, mate!