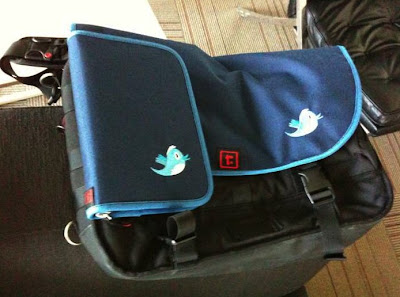 Because we like for you to do the thinking, and because we are auditioning to take over Griff Mail Bag (should we get the call from One Yonge Street), here's some pithy answers to to your questions delivered via Twitter. Tweet Bag!

The Tweet Bag's biggest fan, @PdcD asks: Any predictions or pre-indicators of what a full season of Yunel Escobar as the Jays SS may produce in 2011?

We know that by now, you've all figured out that we're a worrier and that we fret about everything with this team. But Yunel is one of the pieces that concerns us most headed into next year.

While his behind the back glove flips and drag bunts were enough to keep us all excited through the last half of last season, his trend line after arriving in Toronto led gradually downwards. His OPS from July 16th (his first game with the Jays) through August 16th was a respectable .784, with three homers and 10 RBI. The next month (August 17th to September 17th) saw him put up a .748 OPS with one homer and six batted in.

By the time that the last two weeks of the season (September 18th to October 2nd) were finished, Escobar fell off a cliff, posting a .397 OPS, eking out just six singles in his final 54 plate appearances.

The Bill James predictor figures him for a .748 OPS over a full season next year, but with a solid .366 OBP. Which sounds about right to us. We think it's possible for him to be productive out of the number two spot in the lineup, even if he's not crushing the ball. But we have a sneaking suspicion that the more the fans in Toronto see him, the more that they will begin picking away at some of the perceived flaws in their "flashy" shortstop.

NEXT! @a_rebolledo asks: Spose the Jays make minimal changes. Rajai in LF, JBau 3B, JP at C. Say even Lyle comes back at 1B. Are they better next yr?

The way you frame the question, we'd say: "Nope".

We're not convinced that JPA has a Rookie of the Year campaign (though we're open to that eventuality, of course). We don't think that JoBau puts up the outrageous offensive numbers that he did last year (and really, how could he?) Rajai? Well, we like him as a fourth outfielder, and we wouldn't be averse to seeing him get lots of PT. But is he an upgrade? Not really. And Lyle would be welcome back in our mind, because he was sneakily productive (so sneaky, that the advanced metrics don't even notice!), and we love his glove.

Does that mean that we don't think the Jays will improve on last year's showing? Not at all. But you're looking too much towards the offense, and not enough towards the state of the pitching staff. The Jays' offensive numbers could go down next year, and they could still man up and compete based upon their pitching staff (particularly the starters) taking their game to the next level.

Late entry! From our favorite man in Lotus Land, @dlbrows: Is this a make/break year for the plan? No playoffs is fine but can THE plan handle no bounce back from Hill/Lind and...no break out year for Snider? Take the team from the cusp to too much to upgrade?

The short answer is "no". This is not a make or break year for the plan because from what we understand of Alex Antopoulos' direction for the team, the plan isn't about hitting higher peaks, but rather, about raising the level of the plateau.

If this team takes a step backwards this season (80 wins? 76 wins?), and the decline is in part attributable to disappointing years from Hill, Lind and Snider, there is still capacity for the team to make smart acquisitions (like the Yunel trade, in spite of our sour response above), and continue to develop, build and trade from a strong base of prospects.

We've never been a big fan of the "tear it down to build it up" approach, because we actually think that there is a false dichotomy built into that line of thinking. So if 2011 turns out to be something less than stellar, we wouldn't call for the franchise to be stripped down and for the Eternal Building Process to begin anew from a couple of rungs down.

(Plus, we actually don't think that you can tie a team's progress to its win-loss record if you are taking a longer view.)

One more! Punk Rock Icon @DrewGROF asks: Seriously, why would anyone drink a Canadian red wine?

Oh sir. This is an entirely regrettable position you've taken. And while we understand that your South Ontario baco noirs aren't for everyone, to paint all of Canada's vinters with a broad brush of shame is quite unfair.

It's true, however, that those of us in the middle of the country aren't always given the opportunity to get our hands on some of the finest product out of the Okanagan Valley in B.C.. And so maybe Mission Hill's fine products have eluded you in recent times. (And you have yet to come to the realization that John Simes, Mission Hill's winemaker, is a bit of a genius.) But if you have the time and inclination (and a spare $75 to toss around), we'd highly recommend you try a bottle of the 2006 Oculus, a truly outstanding Bordeaux-inspired wine. It's probably the best wine experience that we've ever had.

Also from B.C.: Quails Gate's Pinot Noir, which has a fantastic dark cherry and oak flavour. Also: It gets you drunk.

Finally, a plug for an Ontario wine: Inniskillin can be hit or miss, but their Reserve Series Meritage is great. A nice combination of dark fruit and spiciness. Plus, it's on sale at the Wine Rack this week! (And this post was not paid for in any way. Consider this plug a public service.)

And if none of these recommendations satisfy you, Drew, then I'll keep an eye out for a case of something tasty and suitable for you as I spend the next month in Australia.

Down under? A month? Sounds nice. I miss you already.

I'll tell Luke Prokopec that everyone back in Toronto says hello.

Tao - Make sure you go to Byron Bay for a few days... it's heaven on earth.

Avoid Surfer's Paradise, unless you enjoy skyscrapers blocking the sun on the beach and douchebags.

There's a PSA from someone who backpacked the majority of the continent.

I'm not a big fan of Canadian wines myself, however, Konzelman wines are pretty damn good, and yes, their baco noir is the best I have ever had, but unfortunately is only available at their winery (as far as I know)

I think the jays will regress a bit next year, but like the Tao said, its all part of a larger, long term plan.

A good rule of thumb for canadian wine: for red stay with BC, whites (rieslings) from Ontario.

Please let me know when the change happens - Griff answering Griff's Mailbag makes me want to throw up..... although after a year he finally and hardly ever mentions JP anymore.

Oddly, I think getting JP out of town allowed Griff to chill out and start talking baseball again as opposed to rehashing whatever bad blood he had for the then Jays GM.

I wouldn't say that Griff was my favorite this year, but I certainly found a lot more of interest in what he wrote.

Not that I'm down on all Canuck wine: Southbrook Fume Blanc is a great bottle of wine.

Australian wine! Love the stickies. Make sure you do a day in the Barossa (Kellermeister's chocolate-infused port, Sable, is a personal fave - bring me back a bottle?), a day in the McLaren Vale (d'Arenberg makes fantastic wines, especially the not-available-in-Canada Peppermint Paddock; and there was this fantastic family winery that made a beautiful rose petal wine but damned if I can find them on the internet), and a day in the Yarra Valley. My favourite wine ever is DeBortoli's Noble One.

But yes, there are a few good Canadian reds.

Baseball - to digress from the w(h)ine thread for a moment - Yunel - holding SS till Heck-A-Long SS comes up. IF Yunel stays it'll be at 2nd. The guy is a big(ish) guy who should be able to hit for power - but has been trained since being a wee one to to a slap hitter. Now the guy is just plain fu*ked up - neither fish nor fowl.

The 2010 year by Lind AND Hill is really scary. The in place core of the "Future" was to be Lind, Hill, Snider and the Young Pitchers. If 2011 doesn't see Lind and Hill rebound - a lot - and Snider - given a full year in LF - blossom - then the "Future" looks to be too fu*kin' much like the past for my liking.

Thanks, guys. Now I'm thirsty with two hours left in the work week. Time to go for a 'smoke' break...

Tao, be sure to have some sparkling shiraz in Australia.
But be careful, those bubbles will go straight to your head.