It all depends on your perspective... 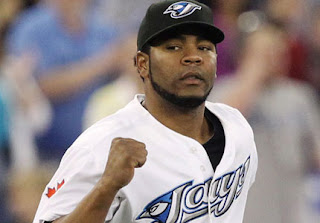 Offseason blogging can be a tough racket, given the paucity of news surrounding these Toronto Blue Jays of late. Once tied to every player available and many who aren't, the search term Toronto+Blue+Jays won't get you a whole hell of a lot on google (or even MLBTR) these days. And what news there is can leave the most ardent of fans scratching their heads.

Item: Toronto re-signs Edwin Encarnacion to play 1B/DH
The optimists among us will point to Encarnacion's obvious power, and the fact that his worst attribute (his, um, inaccurate arm, to be charitable) is minimized with the stated intention of banning him from the left side of the infield. Plus, he hits lefties well and comes cheap. Plus plus, we get another year of milking this (paying attention, Blue Jays in-game promotion staff?). What's not to like?

Well, for starters....bringing back the artist formerly known as E5 doesn't exactly ring the bell on fresh starts and upside. Given 400 AB, we'll see 25 HR and not much else. And that cheap price tag? Well, it's exactly that. Edwin is a low-cost alternative to a veteran free agent and saves Anthopoulos from dipping into the minor league stocks to acquire a long-term solution at either infield corner.

The jury's out on this one. I like the move, but 6 months from now Edwin could be clearing waivers and here we go again....

Item: Jays lose Downs, Gregg, and sign.....?
Yeah, Frasor is back on an arbitration gamble. And Tallet's innings have been replaced by Villanueva. But word from the front office is the club is happy to let the market "sort itself out", leaving the Jays to leverage the arms not yet invited to the dance.

This scene, I'm not so rosy on. Seems to me that filling the 'pen with picked-over stocks does not a contender make.

And that's the heart of all this, isn't it? Should the fans expect the Jays to be making moves this offseason to transform the club into a 2011 contender? Or is the prudent move to bide (at least) one more year of time and let the club mature?

To the disappointment of many, I'm sure....it's becoming clear that seems to be the way management is leaning. Forget Manny, forget Derrick Lee, forget any veteran FA looking to cash in. That's not the current m.o., and I suppose it never has been.

Does that mean all is lost - another year of flailing away in the middle of the AL East, devoid of enjoyment for fans craving a winner? Pardon me, but fuck no.

I expect the comments to reflect anger & impatience, but this is where the club is. Barring an unforeseen blockbuster, the names making up the Jays of 2011 will be much the same as those of 2010 (bullpen notwithstanding). The worst possible scenario is a step back from the veterans such as Wells, more of the same from Hill & Lind, and a lack of a step forward from the young rotation and Travis Snider.

And maybe this offseason is the hedge. Answer some of those questions and then make the definitive move. And hey - last year was fun, right?

Or maybe Anthopoulos pushes his chips to the middle and pulls off a Greinke/Upton/Rasmus deal before this post is cold.

Email ThisBlogThis!Share to TwitterShare to FacebookShare to Pinterest
Labels: Isn't this the happy Jays blog?, Offseason

The Encarnacion signing I like. Mostly because of the damn song. And the mashage of lefties.

I don't mind the team not spending on the bullpen. Fuck it. Let's see what the available arms can do.

I'm also cool without a big/semi-big name coming in to play DH. Again, let's see what we've got. Encarnacion wasn't the problem last season. Nor was the bullpen. Hill and Lind were the problems. Let's see what the Jays truly have in Lind and Hill, and then make a run.

I still think the Jays could sign a 1B/DH type as the jobs start to dry up and some guys get left out. I would really like to see a 1 year deal for Derek Lee but I'd guess he won't be one of the guys left without a job.

I don't think signing E5 for 2.5 million really handcuffs them though. They could still sign another 1B/DH and still get E5 playing time. There is always injuries too, I'd pay 2.5 million to have E5 on my bench ready to play full-time if needed. Better than some of the other sacks of crap the Jays benches have been made up of lately.

I'm thinking Bautista bombs another 50 dingers next season, so naturally, I'll be at the Skydome everyday without a care in the world.

The post season ain't over until the horizontally challanged woman sings.

Bullpen is scary. But arms are arms so they say.

I like it. I am also of the idea that we need to see what we have so AA can determine what we need. Let's just let these kids play and fix the leaks next offseason.

On the lack of bullpen signings. The market for bullpen arms right now is silly (http://www.fangraphs.com/blogs/index.php/relievers-are-not-worth-multi-year-deals/). The Jays have had success in the past creating a bullpen from scraps. I don't see why this should change despite the grumblings of the "go for it in 2011" crowd. Even when they do decide to make a run I would be more comfortable with spending on starting pitching and position players rather than relievers.

Encarnacion could be an Alex Gonzalez-type situation from last year. Turn him into a younger asset. Either way no real harm. Like it.

Though I find myself in the "for" camp on this one, the refrain "no real harm" could just as easily read "no real gain".

I guess what I'm saying is....I do "sympathize" with the crowd whose frustration is bubbling over, watching assets like Marcum dealt for potentially higher-impact assets like Lawrie to push back the timeline...at least optically.

I think we all expected the Jays to take another step forward this winter, and unless you count the potential for internal growth, it hasn't really happened. Yet.

re: bullpen....it's not that I want to see AA blow the budget on a "name" that might only nominally outperform a low-salary reliever....but again, maybe it's just the optics. I don't like the sound of "ah, let's just see who's left after everyone's had their fill."

I also think the versatility of the team may allow the Blue Jays to keep one more arm up in the pen this year. A lot of guys on the team can play multiple positions, giving a lot of guys days off, and still having some good off the bench options.

As it stands right now, our BP depth chart is: Frasor, Camp, Janssen, Purcey, Carlson. After that, you have Rommie Lewis, Josh Roenicke, and one of the following arms for long relief, Rzepcynski, Litsch, Ray, Mills.

I think our pen will do just fine. Especially thinking our pitchers will be going deeper into games, especially Romero. Got a blog coming up illustrating what I think Romero will bring in 2011.

Let's just let these kids play and fix the leaks next offseason.

this sounds familiar. oh right, that's what was said during the '09 off-season. i imagine we'll be saying the same thing again after the '11 campaign.

with so much of the team's identity tied up at the A and AA level, the "let the kids play" and the corresponding "this team is not one or two pieces away from contending" mantras will likely be with us for a while.

Rather than seeing who's left when everybody's had their fill, I'm content with the team seeing what they've already got in the coming year.

As I see it, Frasor, Camp, Janssen, Purcey, Villanueva, Carlson, Lewis, Roenicke and Reyes seem likely to contend for a spot in the pen. With Romero, Morrow and Cecil all but guaranteed a spot in the rotation, that only leaves two openings for Drabek, Stewart, Rzepczynski, Mills, Ray and Litsch to compete for, so I suspect a few of the losers there will get a look for some relief duty as well.

That's not to say that the bullpen is all but set, but I think the pieces are definitely there to put together a decent one.

With regards to the Encarnacion signing, I'm OK with the deal overall, but I thought the purpose of bringing in a 1B/DH type of player was to have a back-up plan in case Lind turns out to be a horrible infielder, and I can't help but think E5 simply becomes E3 when pressed into full-time first base duties.

I'm still of the belief that Rogers is simply not willing to kick any kind of substantial dollars into this team yet, specifically in regards to free agency. Spending money on scouting, International prospects, and draft picks is all well and good, but at the end of the day, the payroll is still going to be around 75 million.

I feel like the disappointment among fans is just one of the consequences of Anthopoulos' "never reveal anything" policy.

Guys like Bob Elliot have been able to drive the media narrative this offseason, and the "the Jays think they're one piece away from contending" item made it's way everywhere, and fast. If that's not the team's plan, many GMs would have simply come out and said that it wasn't true. Seattle and Cleveland, though in worse shape than the Jays, are two teams that come to mind that came out and told their fans not to expect any dazzling moves this offseason. There's obvious pluses to Anthopoulos policy - in that it prevents other GMs from getting involved and messing up his plans - but this is one of the big negatives in my view.

I am one who is against the Encarnacion move and what it says to fans. Fine, he does well in all the new-fangled stats, but the bottom line is that when you actually WATCH BASEBALL every day, this guy sucks. He's an all or nothing hitter, doesn't know how to go the other way and is the worst defensive 3B the Jays have had . . . since Eric Hinske. (sorry, without Eric I could have made this more impressive, but he was really awful)

We pay more for tickets, they have cut tons of benefits for season-ticket holders, got rid of the cheap games in the upper deck and yet we spend less money and don't even try and create excitement???

I get that this is a transition year (again), but how would a 1-year with a reasonable option for Manny hurt the long-term plan? And don't give me any bull that Rogers doesn't have the money, but that particular corporate leech has been sucking the people of Ontario dry for years.

I definitely agree with you.

I get that this is a transition year (again), but how would a 1-year with a reasonable option for Manny hurt the long-term plan?

it wouldn;t hurt the long term plan but it would cost money and set a precedent for signing "big name" free agents to fill gaps.

the current Rogers approach seems to be to hope that fans never think of top names as real options. if the money is truly there (as we are told over and over) then i can't fathom that AA would look at the number of runs scored and NOT be desperate to add some guys who can get on base.

the off season evidence does not support the thesis that Rogers is willing to spend on major league talent, contrary to their public assertions.