That's it? That's your theory? 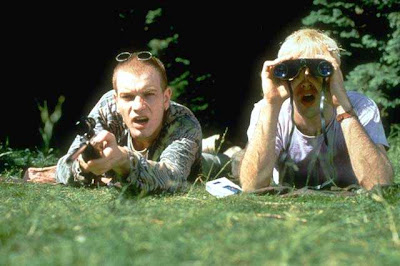 So at some point in his Declaration of Principles call over the weekend, Alex Anthopoulos noted that he wanted to build (NOT re-build, goddamnit!) the Jays with trades, the draft, free agents, international signings, and minor league free agents. That's Alex the Ant's plan. Beautifully fucking illustrated.

Actually, that's not really a plan. It's more of a regurgitation of a primer. (Someone was boning up the night before his exam...er, presser.)

And it stands in stark opposition to the previous regime, who, if they didn't acquire players in one of the ways listed above, must have just waited for players to fall from the sky through the roof of the Dome.

Whatever they think that they're doing, one thing seemed pretty clear from all of this jibber-jabber: There's no great sack of money that will be thrown at the team this year to address any of the problems or gaps that they have, and there won't be any additional money available to paper over the mistake that is Vernon Wells' contract. What we, as Jays fans, are being told is to be patient and that someday, someway, maybe there will be a competitive team in town.

This clearly isn't the mythical J.P. Five Year Plan. It's the newfangled Alex Ant indefinite plan, The Eternal Building Process in which the team will continue to set aside a serious run at the Wild Card or (god forbid) the AL East crown until such a time as they feel comfortable making a run. Because they wouldn't want to embarrass themselves, would they?

We used to pity Pirates fans, because it seemed like keeping the faith with the Bucs was a Sisyphean chore. It kinda feels like they might be pitying us by the end of this.

Picking through the entrails to find little shards of happiness
Look, don't get us wrong. It's not that we're rooting for Alex the Ant to fail. And it's not that we're totally pessimistic. After all, it sounds as though the team is in the midst of looking for a replacement for Cito Gaston, which should be Job #1 if they ever want to be anything in this league.

And to be honest, we can actually understand if the organization didn't necessarily want to can Cito after the player revolt, if only to head off an ongoing series of such clubhouse calamities every time the active roster members had their feelings hurt or their needs not appropriately attended to.

We're holding in our mind's eye a vision, and that vision is of the day in the early season this year where Cito steps aside and pulls the ripcord on his golden parachute. Maybe even before the season starts.

What a pleasant thought.

Talking 'bout rumours
It was weird that within 24 hours of our floating Chris Snyder's name out there as a possible target, there were rumours that he would be coming to Toronto, followed by assurances that he and his gimpy back were not to be exchanged for Lyle Overbay.

We're not sure if we have any powers to make these things happen...but if we do, here goes: We think the Jays should make a run at Lance Berkman, David Wright and Felix Hernandez. Please please pretty please.
Posted by Tao of Stieb at 9:39 AM

The 5 stages of grief are:

I know this because google tells me it is so.

Anywho, I think I've moved past Denial (hey, maybe Doc will re-up...), got past my Anger (Cito! Fuck all this shit!...), and am firmly entrenched in stage 3 - Bargaining.

Maybe the young kids will surprise! We'll grow with them! It might be fun!

This will last until roughly 30 games in, when the mistakes and losses pile up (Depression), and run through season's end to Acceptance (this might take a while...).

What the fuck else can we do?

(side note - I will revert back to Depression, likely for an extended period, when The Transaction That Shall Not Be Discussed happens)

I move back to bargaining every off-season. It's a vicious cycle, being a fan of this team.

"The Eternal Building Process" - that's a good one. And a very depressing one.

As much as I wish Cito would pull the chute, I'm resigned to the fact that we're going to have to put up with him for one more season. One last annoying hurrah. Poor Jeremy Accardo.

"Sisyphus is a jays fan" is maybe the best tag ever. Ever.

I think I've got a foot on either side of bargaining and depression.

I blame Cito. And the terrorists. Cito is kind of a managerial terrorist. In his wake, he leaves destruction.

The part that gets me is that a crappy Jays team is somehow bearable with Halladay taking the mound every five days. The announcement from AA pretty much guarantees that they have to trade him for a windfall, and that's what has really depressed me.

Actually, I think Sisyphus is a Cubs fan. Harry Caray was perhaps the best embodiment of this - sauced by the time the seventh inning rolled around and any sense of optimism was sustained by being pickled in a boozy elixir that numbed the reality of the Cubs's thirst for falling short.

Maybe if Flashback Fridays persist to a point where they become completely meaningless, around the time they honour Sil Campusano, perhaps the Jays will be the most Sisyphus-esque of baseball teams. Until then, it's the Cubs.

Ahh...you'll be surprised. I got over losing Jimmy Key and Dave Stieb.

We're just going to have to use that extra reserve of affection towards Shaun Marcum. By the end of the year, we'll be totally transfixed by his ongoing facial hair choices.

At least if Doc goes to a contender it makes the choice of which playoff team to root for obvious. Unless it's the Red Sox or Yanks.

I'm starting to feel like one of Job's comforters here.

The Jays will spend WHEN/IF they are close...however they will not spend to get close. Catch 22.

SO - if we draft like the second coming and sign every great Latin talent for the next five years we might get close enough to spend.

IF that works then the only way to STAY COMPETITIVE is to KEEP SPENDING bucks - like Boston and the Spankies do. Will that long term commitment to money be there? SURE - provided we fans show up in our 4 + millions at the gate and buy 10$ Montreal Smoked Meat sandwiches while guzzling $7 beer by the case - well - at least the beer part has some attraction - too bad they don't have single malt scotch - at $7 a bottle.

I don't think that you have the luxury of a slow, deliberate build in Toronto. If the Yanks and/or the Red Sox have a down year next year, and you're looking to win 88 games in 2012, you're gonna miss that window.

And it ain't coming back any time soon.

Ask the Maple Leafs how trying to compete every year rather than rebuild has worked out for them.

You can't predict the down years for the Yanks and Sox. With a geriatric offense and disappointing youth (Hughes, Joba, Melky, Cano) and reliance upon an oft injured arm, I would've thought the Yankees were ripe for another letdown this past year.

Hockey and baseball are two different sports. You build your teams differently.

Plus, the Leafs have been rebuilding for five years.

I believe it is always better to try and build the best team you can, rather than sustained mediocrity in hopes of an off season from the teams above you.

As for the Leafs, I don't consider adding guys like Blake, Kessel, Lindros, Allison, O'Neill, Bataglia, Peca, Kubina, Toskala, etc. rebuilding. That is playing for the now, and poorly.

Jays need to load up on as much young talent as possible, go out and get as many guys like Matt Gamel, Brandon Wood, one of the Rockies OF's, Justin Smoak, Bumgarner, etc. These are the types of guys that will break out at the same time as Snider, Rzepczynski, Cecil, Purcey, etc. Now you are talking a core to build around.

Milton Bradley to the Jays? Really? Check out the analysis at http://jaysbalk.wordpress.com

Not entirely sure what exactly everyone was hoping AA to say? Did you expect him to come out, snap his fingers and transform this team into a perrennial conteder?

Not too sure why everyone is so closed minded and cynical of a guy who hasn't even had the chance to do anything of consequence yet.

I agree with Anon 10:00. Tao, snap out of this funk. It's baseball for Christs sake. It's a beautiful game. Fuck winning every year. Fuck winning more than once every thirty years. Just give me a competitive team and a gleam of hope and lets get ready for pitchers and catchers in February.

I never figured you for the instant gratification type, so give yer head a shake and get on with some decent rosterbation and a cigarette.

The decision to go forward with Cito is a kick in the nuts. I don't like it, and it makes the team seem as though they are going to be deliberate in the development of this team.

That said, I was (and still am) pretty happy with the idea that AA and Tony LaCava were getting the reins to direct this team. I just want them to have something to work with.

I quit smoking this week. Don't remind me.

How you gonna write if you ain't smokin?

I have an ether rag.