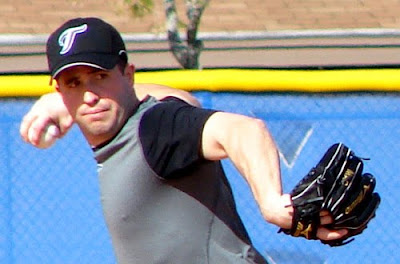 (Editor's Note: This entire post was written and posted before the news that the Jays signed Alex Gonzalez. Maybe it isn't as funny or pertinent anymore. But read along anyhow.)

The vast majority of the responses that we received about the John McDonald signing yesterday were negative, but to varying degrees. (And yes, for some reason, people send their complaints to me, as though I could do something about it.)

But most people still felt somewhat conflicted, because how are you gonna hate on Johnny Mac? The Prime Minister of Defense! Come on!

To help you through this time, we offer a quick breakdown of the various subsets of reactions to the McDonald signing, and judge the appropriateness (is that a word?) of each of them.

The Oblivious "Fuck Yeah!" Happy Subset
Characterized by: A general feeling of elation. These folks are totally stoked that Johnny Mac, the heart and soul of the Blue Jays, is coming back. They may have worn their "McDonald 6" jerseys over their jackets last night. May have had "PMOD 4 EVER" tattooed on their bits yesterday.
Is this reaction appropriate? Not at all. As nice a guy as McDonald is, this is not a great moment in franchise history.
Possible treatments: A quick gander at McDonald's career offensive numbers.

The Ambivalent Subset
Characterized by: A feeling that the signing is a terrible omen, followed by a profound feeling of guilt over their unspoken disdain for such a prince of a guy. May have spent time looking at the Jays 40-man roster, identifying the other "25th men on the roster". Relieved to hear that the Jays are still looking for a starting SS.
Is this reaction appropriate? Absolutely. It's what the sane man is thinking. (Well, it's what we're thinking. If you would characterize us as sane.)
Possible treatments: Watching YouTube videos of Johnny Mac's defensive prowess. Prorating JMac's four homers over a full season.

The WTF?!! Subset
Characterized by: Angry tweeting and angry commenting. Recriminations. May have drawn a link between McDonald's salary and unsigned draft picks. Sent over the edge by the news that the deal was for two years.
Is this reaction appropriate? Probably not. There is some truth to the fact that the signing is not the happiest news ever, and the second year is shocking. But signing a utility guy to a contract worth $1.5 Mill isn't the end of the world.
Possible treatments: Looking at the alternatives. Looking at the salaries of other utility infielders. Deep breathing. Positive visualization.

The Bandwagon Jumper Subset
Characterized by: Threats to stop going to games or watching games on TV. Declarations that this is "the last straw". Threats of cheering for other teams. Threats of canceling Rogers services.
Is this reaction appropriate? Oh, please. Stop. If you don't want to stick with the team through the bad times, then fine. Go cheer for the Tigers. (And what, pray tell) will you do when they trade Miguel Cabrera?
Possible treatments: Checking yourself before you wreck yourself. Sucking it up. Ceasing to be such a whining princess drama queen.
Posted by Tao of Stieb at 10:07 AM

Email ThisBlogThis!Share to TwitterShare to FacebookShare to Pinterest
Labels: dubious signings, Hot Stove, John McDonald, This is what passes for a hot stove

Uh-oh. This was posted before I read the Alex Gonzalez news.

I think people are going to lose their minds today.

Nice to see you stayed out of the DJF flame war. I got sucked in. My arguments "over there" were pretty much with regards to the rationale being presented as to why this was a good thing ("he's a good team guy! he's popular with the fans! this is a non-story!")

I'm pretty much rooted in the Ambivalent subset, but there is a definite WTF element to my reaction with regards to the 2nd year.

And it may be enhanced by the signing of defense-first SS Alex Gonzalez II to play everyday.

(But I'm not gonna lose my mind over it, boss.)

I think the Jays have less to fear from the Bandwagon jumper set than a collective shrug from a much larger portion of the population.

I'm betting they can break that low attendance record in 2010.

Like I tweeted, though, I also think there is more to the Alex Gonzalez signing than meets the eye -- and no, I don't think he can transform into a Volkswagen.

Here's your rock out for Friday http://www.youtube.com/watch?v=YLfGBKO8vOc

I think I'm somewhere between Option A and B on this one - I wasn't overly excited about the signing, but I wasn't going to boycott the team either.

But now that they signed A-Gonz, it changes everything.

Hey, no one can say that the Jays didn't sign a free agent to a major league contract this year!

Looks like we've got another wasted year ahead of us. I can understand this strategy if the Jays had a lot of talent in the minor leagues, but I don't see that.

AT least it's not the OTHER Alex Gonzales...

Will the Jays at least qualify Scutaro? If they don't, then they lose the Bud Selig 'compassionate gesture to reward the upwardly frugal' draft pick. I could be wrong on this.

And you guys are the best. Not only are you busy mining the psyche of young squire AA but also those of the disenfranchised, misguided, and ambivalent fan. This post made me laugh, in a good way. I suppose with the ebb and flow of the offseason coupled with the Doc uncertainty and the fact that AA is trying to usher in a sea change, by the time the opening pitch is thrown the average Jays fan my wind up being Sybil-esque.

Before I forget, 'Paperhouse!'. Or for the Johnny Mac gangsta inclined, 'Paperhizzouse'

Jonny Mac and A-Gon (lame) make for two seasoned vets who can get us thru the shitstorm of 2010 with a platoon scenario. Then, the better of the two gets kept on as a mentor for the SS-to-be-announced-later in 2011. The SSTBAL will be either Justin Jackson if his headfromassectomy proves successful, or a prospect from the Doc's future home city.

Plus Alex Gonzalez is usually a guy that gets traded for at the deadline at +value by a contender.

The Gonzalez signing is fine. But the Jmac signing is made even more puzzling. It's not the money - it's the confidence in management that has taken a hit.

I have to say one thing, I like the Alex Gonzalez signing a hell of a lot better than Orlando Cabrera for 2 years and $10 million.

You're bang on there, spanky. Getting A-Gon at half the price and (possibly) half the term of O-Cab is a pretty good deal.

Of course, Orlando might not find many takers for the two-year deal.

Brainiac nailed it. And if Anthop can peddle Gonzo at the deadline, this might not be such a bad deal.

$4.25 million for two guys who will suck up anything hit to them, and suck at the bottom of the order? Sure, why not.

Here's hoping Gonzalez can replicate the success he had in Boston last season. A .284 average, and a .769 OPS.

I wouldn't count on the Jays being able to move A-Gonz: The Red Sox acquired him, not for a decent prospect, but to take his salary off the hands of the Reds. While these two contracts aren't bad individually, they're puzzling together. The only position either provides average value is at SS, so you don't really need both.

What subset do I belong in if all I can see in the J-Mac picture is his erect nipple?

once loverbay leaves, does blalock make sense as a 1b platoon partner?

Not sure if you clicked on the picture, but I actually named it "JohnnyMacsNipples.jpg". Because that's all I saw as well.

If anyone here truly feels fiat currency is worthless then feel free to give me all your money.